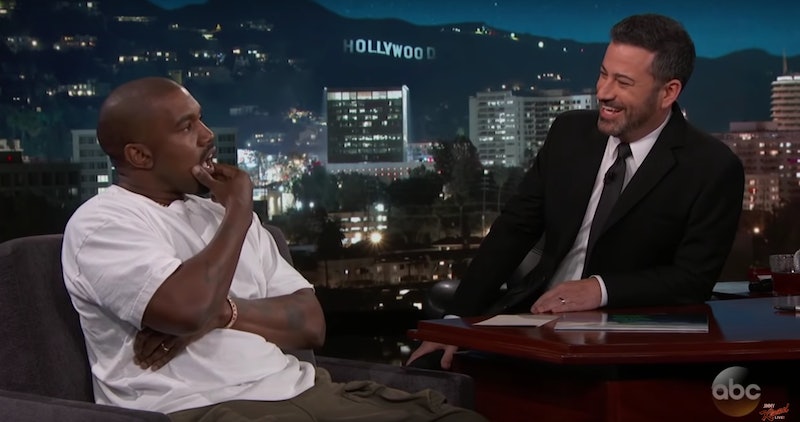 Late-night talk show host Jimmy Kimmel left Kanye West speechless over Donald Trump during a conversation about the recording artist's support for the president on Thursday's episode of Jimmy Kimmel Live! The normally verbose West appeared to be truly at a loss for words when Kimmel, who has often criticized or poked fun at the president on his show, asked him why he thought Trump cared about anyone, let alone the black community.

"There are literally families being torn apart as a result of what this president is doing, and I think that we cannot forget that whether we like his personality or not, his actions are really what matter," Kimmel said of President Trump. "You so famously and so powerfully said, 'George Bush doesn't care about black people,'" Kimmel continued, referencing West's criticism of Bush's response to Hurricane Katrina in 2005. "It makes me wonder what makes you think that Donald Trump does or any people at all?"

West appeared pensive, looking off into the distance with his arms folded across his chest. As West's silence continued, Kimmel moved to transition the show into a commercial break. "Why don't we take a break," Kimmel said, causing West to chuckle and break into a smile.

The question was not brought up again, however, when the interview resumed.

West ignited a slew of controversy in April when he called Trump "my brother," posted a photograph of himself wearing a "Make America Great Again" hat, and tweeted that he and the president "are both dragon energy." On Thursday, he told Kimmel that he'd been frustrated by what he characterized as other people's attempts to tell him which political candidate he should support based on his ethnicity or occupation.

"Everyone around me tried to pick my candidate for me and then told me every time I said I liked Trump that I couldn't say it out loud or my career would be over, I'd get kicked out of the black community, because blacks, we're supposed to have a monolithic thought — we can only be Democrats," West said.

West went on to admit that early criticism of his support for the then-Republican nominee in 2016 had caused him to lose his confidence for publicly speaking out in Trump's favor. "When I came out I had lost my confidence," West said, referencing his 2016 hospitalization. "I didn't have the confidence to take on the world and possible backlash. It took me a year and a half to have the confidence to stand up and put on the hat, no matter what the consequences were."

But wearing Trump's signature red "Make America Great Again" hat wasn't just about vocalizing his support for Trump. In fact, according to West, the hat wasn't about Trump's policies, but rather about overcoming fear.