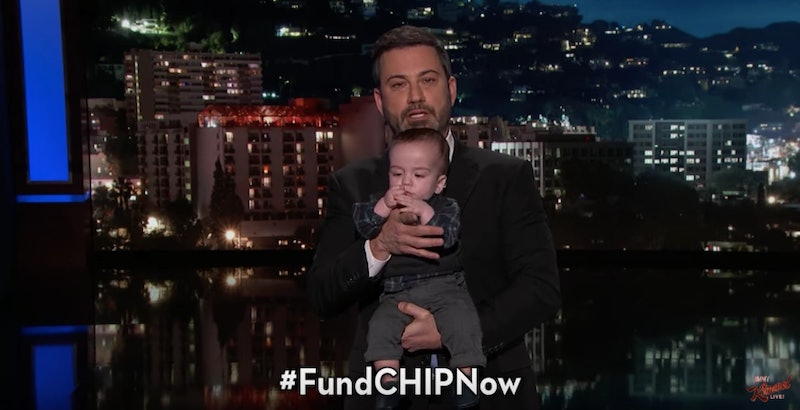 No stranger to politics at this point, Jimmy Kimmel returned to his late night show Monday with another plea for Congress. Toting his baby son Billy, Kimmel pleaded with Congress to save CHIP — the Children's Health Insurance Program, which ran out of federal funds in September — stating that the program was being used as a bartering chip in Republicans' tax cuts negotiations.

Kimmel thanked the doctors at Children's Hospital Los Angeles who treat not just Billy, but "children from every income level whose health is especially threatened right now because of something you've probably never heard of. It's called CHIP." Kimmel gave a brief outline of the program, noting it covered about 9 million children whose parents make too much money to qualify for Medicaid, yet don't receive insurance through their jobs.

Kimmel explained he'd missed a week of hosting for Billy's heart surgery, and beamed that Billy was doing well. But he blasted Republicans for ditching their previous bipartisan support for CHIP during their effort to pass tax reform.

"I've had enough of this. I don't know what could be more disgusting than putting a tax cut that mostly goes to rich people ahead of the lives of children," Kimmel said. He then implored his audience to "jam the House and Senate phones tonight, tomorrow, as long as it takes," and tell their congressional representatives to pass funding for CHIP immediately.

Billy's story has become an ongoing feature of Kimmel's show virtually since his birth — Kimmel's son was born with a rare and potentially fatal heart disease that necessitated immediate surgery. About a week after receiving the news in April and watching Billy undergo emergency surgery, Kimmel returned to the air visibly moved, and brought with him a message: it shouldn't matter what parents can pay when it comes to saving the life of their child.

Kimmel has since used Billy's experience to advocate on behalf of all parents, especially those who don't have the financial resources to pay out of pocket for their child's health needs. This vocal advocacy in favor of more liberal health benefits has led Kimmel to ardently support Obamacare — and brought the late night host into public confrontation with Republicans trying to change it.

One of those fights came during congressional Republicans' "final" push to repeal Obamacare via the Graham-Cassidy bill. Kimmel had invited Sen. Bill Cassidy onto his show in May to discuss what GOP changes to the insurance market would entail. The two came up with the "Jimmy Kimmel test" for any new legislation, which Kimmel defined like this:

No family should be denied medical care, emergency or otherwise, because they can't afford it.

But when details of the Graham-Cassidy bill came to light, Kimmel erupted on air over the proposal's failure to follow through on Cassidy's promise to protect low-income children's health.

Kimmel blasted Cassidy on his Sep. 18 show, saying not only did his legislation fail the Jimmy Kimmel test, it also failed the "Bill Cassidy test." With a sense of disgusted befuddlement, Kimmel outlined all the ways the Graham-Cassidy plan reneged on promises Cassidy had made. It did not provide health care insurance for everyone; it would allow insurance companies to discriminate against applicants with preexisting conditions. Premiums would not be lowered for middle-class enrollees, and the bill did not expressly ban lifetime caps on insurance spending. When Kimmel came under fire from the right-wing for using his late night show to blast Republicans, he clapped right back.

"I'm not pretending to be an expert. I'm asking why people like you aren't listening to actual experts like the American Medical Association," Kimmel said in September after playing a clip of Republican Sen. John Kennedy questioning his credentials to speak out on health care.

Kimmel has been credited by many with helping to quash Graham-Cassidy — and for millions of parents who rely on CHIP, Kimmel's advocacy is once again shining on a light on the way policy details impact Americans in real life. It's a good bet that the publicity boost from Kimmel's late night show will help get CHIP funding passed — the sooner the better.