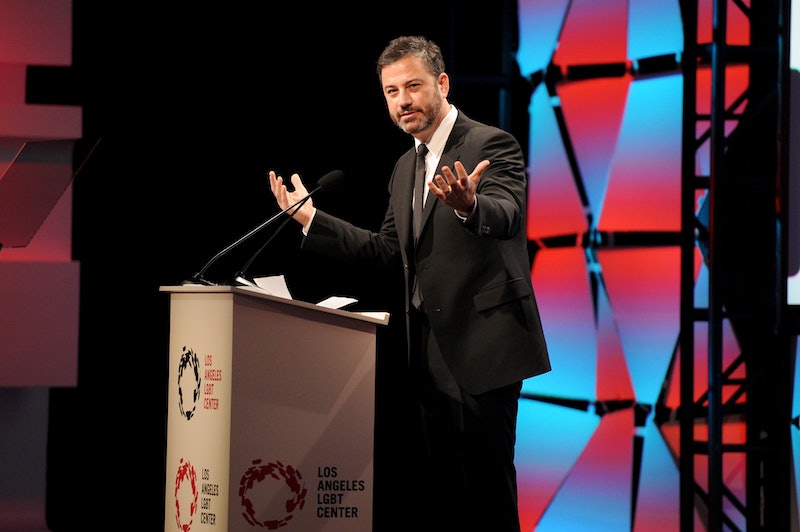 On Tuesday night, late-night host Jimmy Kimmel doubled down on remarks he made the day prior about the need for politicians to take action on gun control. After an Oct. 2 monologue about the tragic Las Vegas mass-shooting yielded criticism, Kimmel defended his opinions about gun control.

Right-wing pundits like Fox News' Sean Hannity described Kimmel's Monday call to action as "utterly disgraceful," but Kimmel was undeterred. In fact, on Tuesday he went so far as to suggest that Second Amendment defenders who resist reform might do so because they feel responsible for the violence.

But I do want to say something to those nuts who spent most of the day on television and online attacking those of us who think we need to do something about the fact that 59 innocent people were killed. They say it’s inappropriate to be talking about it because it’s too soon. Well, maybe it is too soon for you because deep down inside you know - in your heart you know you bear some responsibility for the fact that almost anyone can get any weapon they want, and now you want to cover yourself until the storm of outrage passes and you can go back to your dirty business as usual.

Sunday's shooting in Las Vegas, which killed at least 58 and wounded more than 500, Kimmel argued, should motivate law-makers to act, immediately.

"It is not too soon for us," he said. "We’re Americans. And last time I checked, the First Amendment is at least as important as the Second Amendment."

He concluded his monologue by saying to critics, "Shame on you for suggesting we do otherwise."

This is the most recent episode in a series of serious political commentaries Kimmel has delivered directly to viewers. Back in May, Kimmel made headlines for beginning his show with a heartfelt plea for unity over healthcare. In the now-viral clip, he shared the story of his own son's heart defect and lamented the idea that not all parents would be able to afford its treatment.

Kimmel then followed up with his May monologue with a similar address in September, when yet another Republican-sponsored attempt to defang the Affordable Care Act (ACA) was making headlines. At the time, the so-called Graham-Cassidy bill threatened to cut back healthcare coverage for millions of Americans. Kimmel took to his show to specifically call out Sen. Bill Cassidy, who had been on Kimmel's show before to defend his stance on health care reform.

"I do give him the benefit of the doubt," Kimmel said of Sen. Cassidy on Sept. 21, tearing into the politician. "I doubt all the benefits he claims are part of the new health care bill."

That bill proceeded to fail a few days later, without ever being formally voted on. Kimmel may not have literally stopped the vote, but he's developing a name for himself, and his confidence in taking on A-list politicians is just what some people have been thirsting for.

Particularly in light of the Trump-infected news cycle, it's reasonable to feel like a lot is at stake in day-to-day politics. Some believe that the onus is on those with the microphones, both literal and metaphorical, to stand up for those who may not have access to such a large platform. Kimmel isn't the first or only celebrity to take the Trump Administration to task, either. The Oscars, the Emmys, the Tony Awards, the NFL, and the NBA have all proven platforms for celebrities in virtually every genre of entertainment to speak out.