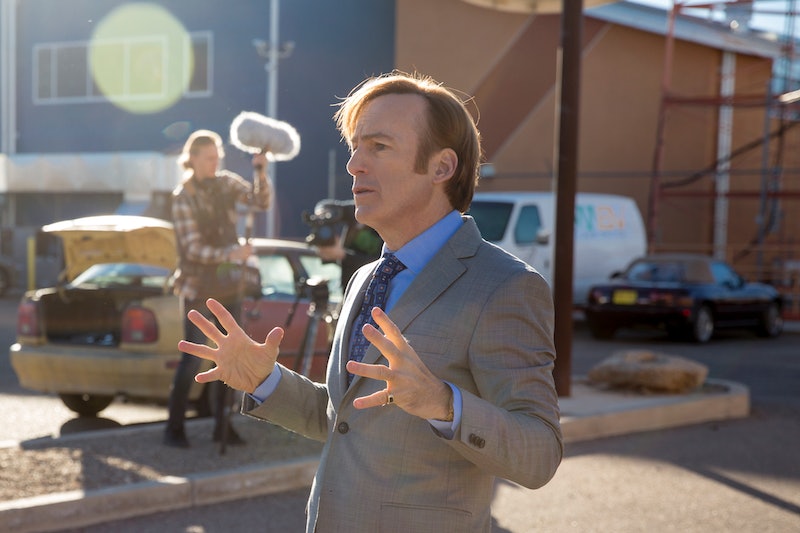 Ever since Better Call Saul began, viewers have been anxiously waiting to see how Jimmy McGill will evolve into Saul Goodman. Considering Jimmy McGill is a lawyer and Saul Goodman is a lawyer, it felt safe to assume that Saul would emerge as Jimmy's attorney alter ego. Yet, Jimmy first becomes Saul on Better Call Saul not for his law firm, but for his new business venture — advertising — as the May 15 episode, "Off Brand," shows. So while Jimmy uses the name Saul Goodman, he still has a long way to go before he completely transforms into the criminal defense attorney.

When Saul was first introduced on Breaking Bad in the Season 2 episode, "Better Call Saul," he was an established sleazy lawyer who saw an opportunity to represent Walter White in all things criminal. He explained right off the bat to Walt that his last name was really McGill in Breaking Bad, but it took until Season 3 of Better Call Saul to see what drives Jimmy to become Saul. And, as I suspected, it all has to do with Chuck's efforts to have his younger brother disbarred.

While I had considered that Jimmy's bar hearing would lead to his name being tarnished among the elderly community and he would need to start practicing the law (legally or illegally) under a pseudonym, the creation of Saul Goodman does not come as a way for Jimmy to continue working as a lawyer. On the contrary, Jimmy is adhering to his year-long suspension when he discovers that his "Gimme Jimmy" commercials are still airing on TV. By pulling these ads off of television, Jimmy will end up losing $4,000, so he comes up with a scheme to create commercials for other businesses as a workaround.

When Jimmy's desperation scares off Raby Carpet & Tile Outlet from doing a commercial, his inept camera crew comes up with the idea that he could make a commercial about making commercials. Since it's "off brand" for Jimmy to go from a "lawyer you can trust" to the guy who's hawking commercials, he decides to disguise himself — or, as he says, "Karloff this thing." (Presumably referencing how Boris Karloff had created his memorable stage name.)

His energetic persona of Saul Goodman (for "s'all good, man") lands him a client right away and because of this success — and the fact that Jimmy can't legally be a lawyer for the next year — there's a chance he could continue to sell advertising as Saul for the next 365 days. That still doesn't explain how Saul will go from selling commercials to small business owners to being a criminal defense lawyer, but I'm sure Better Call Saul will make that evolution occur in just as surprising of a way as it made him become Saul in the first place. Yet, that most likely means that Jimmy will have another setback — like, perhaps Kim disapproving of this new persona? — before he can 100 percent embody this new character he has created. So just because Saul is here doesn't mean that the end of Better Call Saul — or Jimmy McGill — is anywhere near.