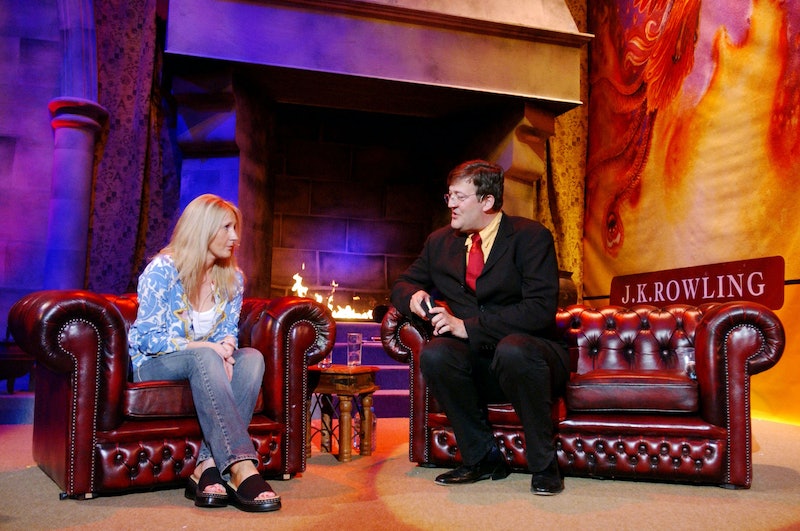 J.K. Rowling just debunked a famous Harry Potter myth: Stephen Fry and J.K. Rowling's argument over the audiobooks. It turns out, the oft-quoted story of Rowling deliberately making Stephen Fry's job hard never actually happened. I have to say, I'm pretty relieved: isn't it so much nicer when everyone just gets along?

The old story goes like this: when Stephen Fry first met Rowling, Potter mania hadn't yet taken off — and Fry made the mistake of underestimating quite how important our queen J.K. was going to be. When he heard that her book was getting a sequel, he rather patronizingly told her "good for you" — which did not go down well with our J.K.

Years later, when Fry was recording the audiobook for Prisoner of Azkaban, he was struggling with the phrase "Harry pocketed it" — which is a tongue-twister, to be fair. But when Fry asked Rowling if he could change the phrase to something a bit easier on the lips, like "Harry put it in his pocket," Rowling wouldn't budge — and here's where she got her final, grand revenge. Apparently, if you look close enough, you'll find the phrase "Harry pocketed it" in every book from that point on — all just to mess with poor Stephen Fry.

It's a great story, and a rumor I've been guilty of spreading. But here's the thing: none of that ever actually happened.

As a fan of both Fry and Rowling, I am relieved to hear that Stephen Fry wasn't as condescending as this story makes him out to be — because if he was, I would totally support J.K. Rowling's Slytherin-esque revenge.