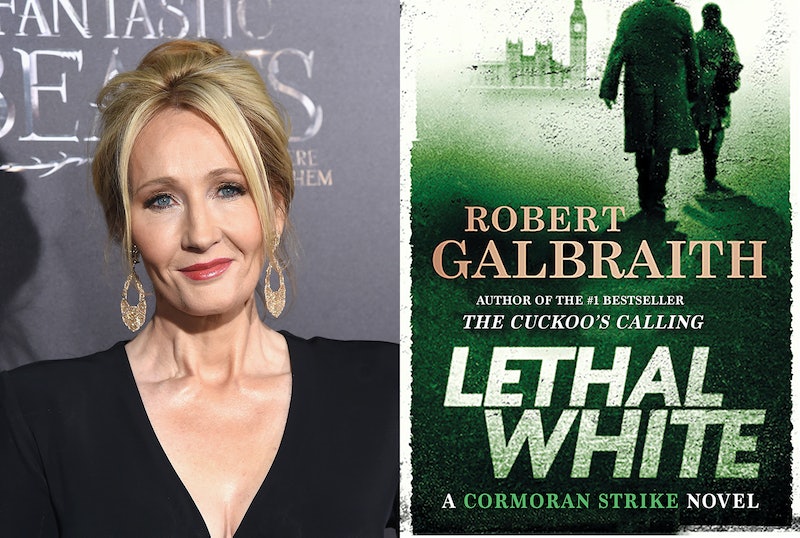 No matter the subject — or the intended audience — J.K. Rowling, perhaps better known, in this instance, as crime author Robert Galbraith, is an expert at world building. Even if the world is the seedy underbelly of contemporary London and not magical Hogwarts, cracking the cover of a Galbraith novel is like stepping through a portal. You're immersed, all at once. It's in this vein that we're dropped into Galbraith's latest, Lethal White, the fourth in the Cormoran Strike series. If you're considering using Lethal White as introduction to the Cormoran Strike world, you'll spend the first 40 or so pages playing catch up, trying to decipher who's getting married — for Strike Series fans, yes, it's Robin and yes, to Matthew (yes, ugh) — why Robin was fired, and why Cormoran, bruised and bloodied following his capture of The Shacklewell Ripper, appearing at Robin's wedding is such a controversial character.

Even if the world is the seedy underbelly of contemporary London and not magical Hogwarts, cracking the cover of a Galbraith novel is like stepping through a portal. You're immersed, all at once.

Though Galbraith provides ample clues to what happened previous novels, you'll be too distracted filling in the blanks to appreciate the devastating, emotional weight of Robin and Cormoran's sensual embrace after Robin breaks free from her first dance to chase after her former boss. But as much as Strike fans may want things to return to "normal" — after all, Cormoran hires Robin back! — the first half of Lethal White is spent navigating the boundaries of the "new" normal. Robin is married now, and after her encounter with The Shacklewell Ripper, struggles under the weight of Post-Traumatic Stress Disorder. Cormoran has retreated further into his own world, threadbare in its dearth of personal relationships. The sexual tension between Robin and Cormoran has festered, as Robin works through a rocky marriage to Matthew and Cormoran buries his broken heart in work and drink and unsteady relationships with other women. It's bleak, and Strike Series fans need to trust that the plot will warm up after the initial icy start.

It's clear why Rowling has chosen a pen name for this series, an attempt to sever any ties, any comparisons, to her Harry Potter work. The world of Cormoran Strike, British army veteran turned private detective, is a far cry from the Wizarding World of Harry Potter. While the HP series had its dark (very dark) moments, Cormoran's line of work puts a spotlight on pedestrian violence — The ugly side of humanity is often on display, desperate and raw. And it can be difficult, sometimes, to find any semblance of saving grace. It's there, but it's buried.

In classic Galbraith (and Rowling) fashion, there are several cases interwoven into a larger story in Lethal White. Throughout the novel's 647 pages, it can difficult, at times, to keep track of the multiple cases. There is Jimmy Knight, who shows up at Cormoran's office while in the throes of a psychotic episode, anxious for someone to hear about the death of a child he allegedly witnessed years ago. There's Jasper Chiswell, the Minister of Culture, who wants Cormoran to investigate a political rival for potential blackmail. There's Jimmy's brother, Billy, a far left organizer with less-than-pure motives. All plays out in the contemporary world of the British class system.

The ugly side of humanity is often on display, desperate and raw. And it can be difficult, sometimes, to find any semblance of saving grace. It's there, but it's buried.

Despite Lethal White's slower moments, Galbraith does have an excellent sense of the reader's attention span. Whenever the plot threatens to slow to a dangerously plodding pace, Galbraith throws in a clue, opens up a door. And he draws you back in. When a suspicious death cracks the plot wide open, Lethal White's second half shoots forward, gaining speed and momentum as Corcoran and Robin circle closer to the truth.

One theme in particular stands out in Lethal White, perhaps in the current post-Sharp Objects, #MeToo landscape: the complicated role of victim. The idea — well, the reality — that a person can be both victim and abuser, can be hurt and can inflict the same hurt on others. And that the title of victim is not an absolution. It is not a forgiveness for future sins. It's an issue grappled with throughout the novel — and one that will continue to be grappled with in real life, too.

More like this
Netflix Shut Down 'Bridgerton' S3 Rumours About A “Very Dark” Storyline
By Bustle
'The Last Of Us' Episode 4 Put Twitter Into An Emotional Spiral
By Alyssa Lapid
Bill & Frank’s 'The Last Of Us' Episode Has Twitter Emotionally Wrecked
By Alyssa Lapid
Delia Cai’s Small-Town Romance Goes Beyond The Tropes
By Samantha Leach
Get Even More From Bustle — Sign Up For The Newsletter
From hair trends to relationship advice, our daily newsletter has everything you need to sound like a person who’s on TikTok, even if you aren’t.