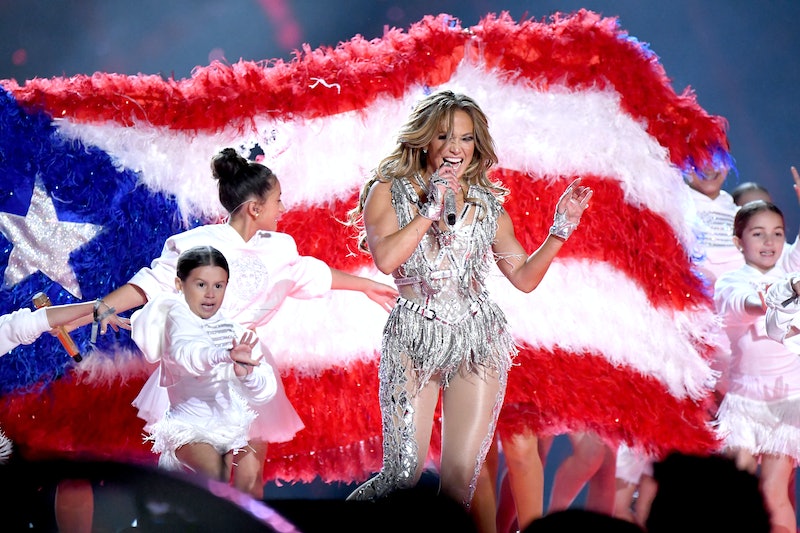 Jennifer Lopez and Shakira didn't just let their incredible moves (and hips) do all of the talking at the Super Bowl — they also left an important statement on stage. J.Lo and Shakira's Super Bowl Halftime Show featured a subtle pro-immigration message, and somehow, many people missed it. Fans who caught the moment, however, are praising the dynamic duo for calling attention to U.S. immigration laws on one of the world's biggest stages. Bustle reached out to J.Lo's representatives for comment, but did not receive an immediate response.

Toward the end of their electrifying performance, J.Lo's daughter, Emme Maribel Muñiz, took center stage to sing a moving, slowed-down snippet of her mom's festive hit "Let's Get Loud," with none other than Shakira on drums. Behind Emme was a group of children singing, wearing all-white outfits plastered with sparkling American flags. And surrounding the main stage were kids sitting in what looked like lit-up cages, a staging choice that fans are interpreting as a reference to the ongoing border crisis and the controversy of immigrants, adult and children alike, being held in camps.

After this powerful display, J.Lo came back on stage, dressed in a feathered cape featuring the U.S. flag on the outside and the Puerto Rican flag on the inside, as her daughter sang a brief rendition of Bruce Springsteen's "Born in the U.S.A." It hasn't been confirmed whether it was an intentional pointed statement, but the message fans got was clear: Puerto Ricans have a home in the United States, and Trump's extreme immigration policies will not be tolerated.

Going into the Super Bowl, both Shakira and J.Lo made it clear that they wanted to leave a statement of unity and diversity on stage. "Two Latinas doing this at this time in this country — it's just very empowering for us," Lopez said during the Super Bowl press conference on Thursday, Jan. 30. "For me, I'm very proud to be able to help set and push forth that message."

Shakira also acknowledged how significant their platform was for Latinx people in the United States and around the world. "It’s very important for us to convey a message of unity and also to show what a relevant force the Latin community is in this country," she said. "I think the Super Bowl is a very American event, as American as it can get. I think it's very nice to see that it's also going to be a reminder of the heritage of this country, which is one of diversity."

The fact that the Super Bowl took place this year in Miami, a city that contains a large Hispanic and Latinx population, and one that holds significance for both superstars, only made this message hit home a lot harder. Let's hope Trump's administration is listening.

More like this
The 'Love, Lizzo' Harry Styles Scene Is Just 1 Moment That Made Fans Feel Seen
By Brad Witter
Mariah Carey Is "So Proud" After Her Kids Joined Her In The Thanksgiving Day Parade
By Stephanie Topacio Long
Kim K Is Putting Kanye’s Memorabilia — Like Grammys & Clothes — In A Vault
By Jake Viswanath
Britney Spears Celebrated Her Birthday With Loving Messages To Jamie Lynn & Her Sons
By Brad Witter
Get Even More From Bustle — Sign Up For The Newsletter