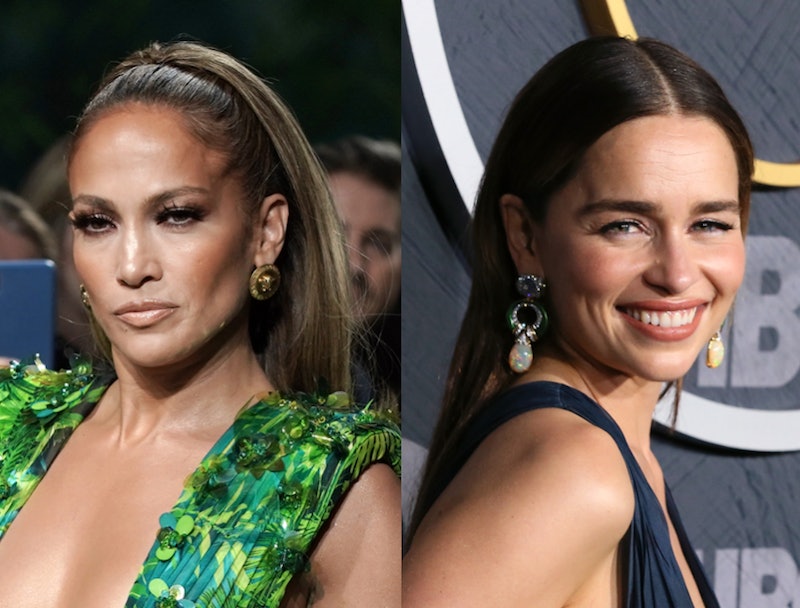 Jennifer Lopez might not have been nominated for a 2019 Emmy Award, but that doesn't mean her presence wasn't felt on Sunday, Sept. 22. Game of Thrones star Emilia Clarke actually used an iconic Lopez look for her Emmy outfit inspiration, and gushed about the actor and singer on the red carpet. And J.Lo's response to Emilia Clarke fangirling over Hustlers on the Emmys red carpet shows the admiration is a two way street.

During the red carpet portion of the Emmys, Emilia Clarke revealed to Entertainment Tonight that her plunging V-neckline gown was inspired by the "I'm Real" singer's famous looks. But she's not only inspired by Lopez's fashion, she's also a fan of the singer's work on the big screen. "I think that J.Lo in Hustlers is the greatest introduction of a character I have ever seen," Clarke said. "I heckled in the cinema. I'm English, I don't do that, but I did! So J.Lo is my inspiration for this evening. I plan on channeling her all night long." The slightly risqué look was reminiscent of J.Lo's iconic green Versace dress that she wore to the 2000 Grammys — the one that literally caused the invention of Google images and that Lopez just recreated at Milan Fashion Week.

Clarke's glowing review got the attention of Lopez herself, who shared the video on Instagram, with the caption, "When the Mother of Dragons meets #Ramona. 🔥 #dead #HustlersMovie I love u @emilia_clarke 💙 #daenerys." Clarke may have fangirled over Lopez and her electric first scene in Hustlers, but it seems that Lopez is also a major fan of the Mother of Dragons.

In fact, Lopez has long been a huge Game of Thrones fan. Speaking on a SiriusXM radio show earlier this year, Lopez gushed about how excited she was for the GoT finale, rising out of her chair with her excitement. She also spoke about how much she loves the show during an appearance on The Breakfast Club in the spring. Nathalie Emmanuel, who plays Missandei, tweeted out a clip of Lopez urging Charlamagne Tha God and Angela Yee to watch Game of Thrones in April. "I cannot wait!... The middle gets rough, but then when you get to the end, ooh," she exclaimed in the video.

Lopez has also made GoT references and posted about the series in the past, like when she launched her Pretty Little Thing campaign in April, writing on Instagram, "I hear winter is coming," and her Game of Thrones to do list shared in July of 2017. In 2015, Lopez declared her GoT fandom to the word, tweeting, "Home in bed...what TV series should I start watching?? Finished Game of Thrones, SOA, Homeland & Breaking Bad #needanewshow #bingewatching."

Although Clarke didn't take home the Emmy for Outstanding Lead Actress in a Drama Series, Game of Thrones as a whole walked away with the most prizes of any show this year. And being recognized by the one and only Jennifer Lopez is really an award in and of itself.