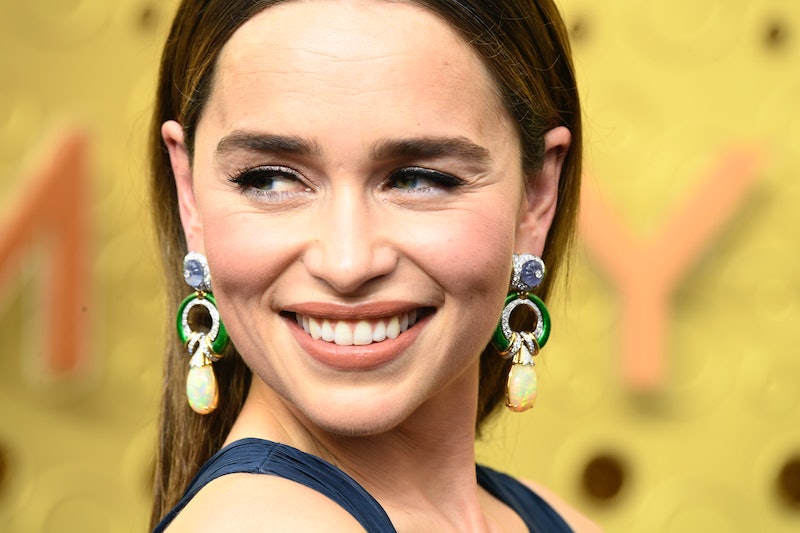 It's a big night for Emilia Clarke. She's nominated for Outstanding Lead Actress in a Drama Series for her work as Daenerys Targaryen in HBO's Game of Thrones. She was nominated three times in the Supporting Actress category but has yet to win. However, she definitely came dressed to win this year: Emilia Clarke's 2019 Emmys look was instantly iconic and proof that she was ready to take home her first gold statue.

Clarke wore a deep blue Valentino dress that boasted two pleated front panels that dipped into a very low V in the front. It also featured a tie around the waist, pockets, and two side slits in the straight skirt. In an Instagram shot she posted on her way to the ceremony, Clarke tagged Jennifer Lopez as the inspiration for her look. One can only assume that the caption was a reference to J. Lo's infamous and iconic green Versace dress from the 2000 Grammys. Clarke accessorized her gown with iridescent and teardrop-shaped earrings.

Clarke's red carpet style is usually ethereal and sophisticated, which is quite the contrast to her fierce Mother of Dragons TV look. She has definitely established her signature look apart from the character that has made her incredibly famous, and her 2019 Emmys attire fell in line with the romantic looks we've come to expect.

While Clarke is best known as the eternally blonde and braided Khaleesi, she wore her naturally brunette hair down and blown stick straight on Sunday. The actor has gone with center-parted updos when attending previous Emmys ceremonies, and while she wore her hair down, the part paid homage to her past looks. Celebrity stylist Jenny Cho was responsible for her sleek and chic coif.

For her makeup, Clarke opted for a natural and subtle, "no makeup" makeup look. She went with nude, glossed lips, curled lashes and shimmery lids, and dewy, rosy cheeks. Her presentation was straight up lovely and she worked with celebrity makeup artist Jillian Dempsey to craft this look.

Looking back at her other Emmy appearances, you'll notice Clarke has always favored either a tank-like top or something strapless for the occasion.

At the 2018 Emmys, Clarke stunned in dark and floral Dior frock with a sheer bodice. Her stripey blonde highlights, which were swept off her face, added a bit of a punk rock edge. That year, the top half of her dress brought all of the drama.

Clarke's 2016 Emmys ensemble was a nude Atelier Versace gown that was deceptively simple. The shield-like top half of the dress had a touch of Daenerys' energy and vibe.

For her 2013 Emmys look, Clarke went with ruffled and belted Donna Karan Atelier. Her accessories were a sharp contrast to the softness of the frock's fabric.

While at the 2012 ceremony, Clarke was both a red carpet and Hollywood up 'n' comer in purple and white Chanel with pockets.

While Game of Thrones has wrapped for good, Clarke is poised for a long and successful career in Hollywood after establishing herself on the smash hit series. She celebrated the warrior role with a dramatic and daring yet wholly fashionable (probably not) final lap on the Emmys red carpet.

More like this
8 Bennifer Outfits That Stand The Test Of Time
By Avery Matera
Lauren London’s Best Outfits From Netflix’s You People
By Alyssa Lapid
Kendall Jenner’s Colored Tights Prove That Cheugy Can Be Chic
By Alyssa Lapid
Olivia Rodrigo’s Grammys After-Party Dress Was Sequined Perfection
By Alyssa Lapid
Get Even More From Bustle — Sign Up For The Newsletter
From hair trends to relationship advice, our daily newsletter has everything you need to sound like a person who’s on TikTok, even if you aren’t.