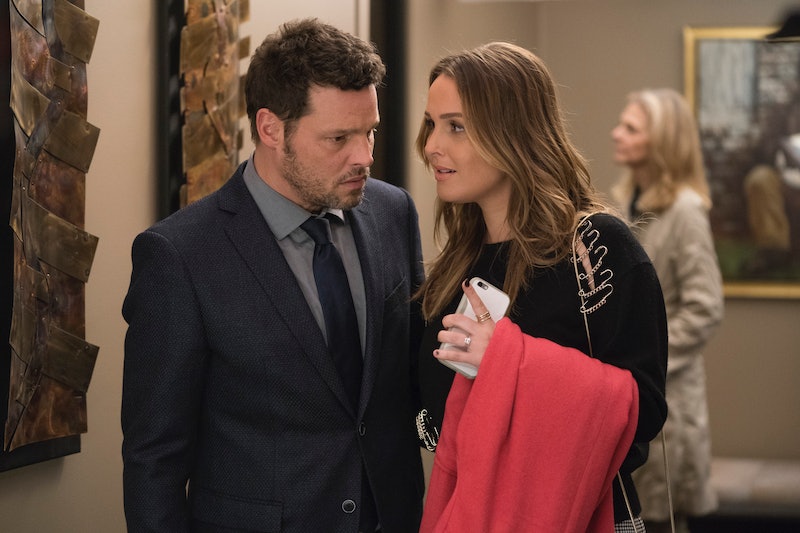 Spoilers ahead for Grey's Anatomy Season 16. So it turns out Karev wasn't in Iowa after all? The ongoing mystery of what happened to Alex Karev on Grey's Anatomy will finally be solved in the ABC medical drama's March 5 episode, but first fans are going to have to feel Jo's pain. After answering a knock at her door that turned out to be Link — with "donuts and despair" in hand — at the end of Feb. 27's "Snowblind," Jo finally came to the painful realization that Alex isn't coming home. "I thought you were him," she told Link before uttering those three heartbreaking words: "He left me."

In that moment, Link was all of us, assuring Jo that Alex certainly had not ghosted her, his beloved wife. The Alex whom fans had seen grow and mature over the course of 16 seasons on Grey's? Never. But, as Jo explained to Link, she had reason to believe otherwise:

"I think he did. I think he woke up one day and felt the need to escape his life and me. I called his mom. He wasn't there. He'd never been there. He left me, and I can't... I can't breathe."

Cue some seriously heartbreaking sobs. And if you don't need resuscitating equipment yourself after seeing Jo's breakdown — especially after all she's been through — you may need DeLuca to go fetch you a new heart since he seems to have the whole carrying organs through the snow thing on lock. (His mental health remains of high concern for Meredith and Carina, too, by the way.)

Jo's tearful admission she'd been jilted broke from her agitated demeanor earlier in the episode when she snapped at Schmidt for "losing" a patient (played by Beanie Feldstein). Instructing him to immediately locate the woman, Jo seethed, "While you're at it, try and find my husband." Now that we know he never actually went to Iowa to take care of his mother, however, Schmidt's going to have to cast a much wider net.

Elsewhere in the episode, longtime fans may have caught a throwback Alex reference while Meredith and Hayes discussed Cristina — though it didn't come without a whole lot of shade first. After McWidow explained that his "absentee co-chief" had treated their young patient's now-deceased older sister, Meredith recalled how devastated Alex had been when the girl had died. Hayes scoffed that he apparently couldn't have been devastated enough to come back and help her sister. "Yang spoke a lot about Karev," he added, thinking Cristina used to call him the devil. Meredith, the "twisted sister," of course, corrected him with "Evil Spawn."

Despite all the disrespectful smack talk in Alex's own home, ABC's previews for the Grey's March 5 installment bill the episode as Justin Chambers' farewell. "After 16 seasons, we're saying goodbye to Dr. Alex Karev. See how his story ends next Thursday on Grey's Anatomy," read a Feb. 27 tweet from the show's official account. The post included a video montage of nostalgic Grey's clips of Alex over the years.

The Hollywood Reporter noted the same day that the upcoming episode will not include any new footage of Chambers. Either way, tissues would be advised as Grey's says goodbye to one of its last remaining OGs. After dragging out any sort of closure with weeks of the repeated Iowa lie, hopefully it's the farewell that both Chambers and Alex deserve because right now nothing makes sense.

More like this
The First Trailer For 'That '90s Show' Includes So Many Nods To The Original Series
By Jack Irvin, Alyssa Lapid and Grace Wehniainen
'Bridgerton' S3 Teases Exciting Social Season For Penelope Featherington
By Bustle
A 'Grey's Anatomy' Alum Will Join Negan & Maggie's 'Walking Dead' Spinoff
By Alyssa Lapid
'Neighbours' Is Officially Coming Back & Fans Are Going *Wild*
By Sam Ramsden
Get Even More From Bustle — Sign Up For The Newsletter