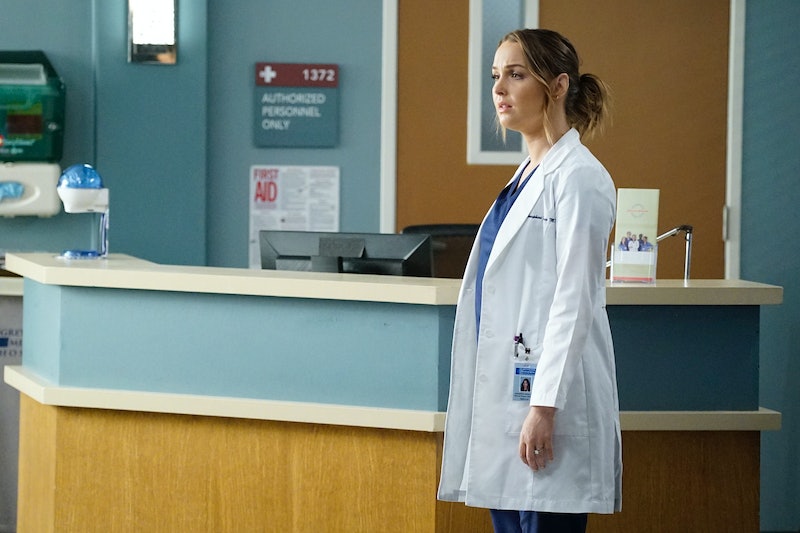 Grey's Anatomy is famous for shining light in "dark and twisty" places. Approaching the end of Grey's Season 15, for example, Camilla Luddington's Dr. Jo Karev (née Wilson) discovered some devastating truths about her life after tracking down her birth mother for the first time. Not only did Jo learn that she was the product of rape, but her mother, who had no interest in developing a relationship with her, also revealed that the surgeon's father is dead. The overwhelming news caused Jo to isolate herself from loved ones, as she spiraled into a deep depression.

By the season finale — with a little help from her Grey Sloan friends — Jo bravely agreed to check into the hospital's psychiatric ward to seek mental health treatment. With the Season 16 premiere's slight time jump, however, the ABC medical drama seemed to gloss over Jo's initial recovery period. But, as Luddington reveals to Bustle, the storyline of "what Jo experienced in treatment" will soon be revived in flashback.

"It's something that was really important to us because we didn't want to just rush through like, 'oh, she's out and now she's fine.' We wanted to kind of show the progress she made and the setbacks she had," explains Luddington, who joined Grey's in Season 9. "Depression is going to be something that Jo is living with, and, as she said in the first episode, it's not something that magically can just go away forever."

That's something the actor says she has experienced firsthand and was able to bring to her portrayal of Jo's struggle. The 35-year-old actor says that, after her mother passed away unexpectedly when she was 19, she went through a difficult "mourning period" of "trying to move on" with her life. After Luddington's now-2-year-old daughter Hayden (whom she had with husband Matthew Alan) was born in April 2017, that grief took on a new form.

"When I had a child, a lot of my own trauma from losing my mom when I was younger kind of came up with me now being a parent to my own daughter," shares Luddington. "I started to get a lot of anxiety. I was constantly afraid that I was going to die early and leave her. And I didn't understand that anxiety was so overwhelming because I have never suffered from anxiety before in my life."

As a new mom, Luddington began therapy, something she says was important to her because she "didn't understand the coping mechanisms" she needed to feel like she "could parent in a way without this anxiety that something was going to go wrong." Although the anxiety is something she "continues to deal with" the British actor adds "there was so much strength and, honestly, release in being able to go and seek out a therapist and speak about it to somebody."

Her character continues to see a therapist on Grey's, and one of the biggest members of Jo's support system, of course, is husband Alex Karev (Justin Chambers). "In regards to Jo's mental health, he's in it, like he said, for the long run, and so they're gonna navigate this together," adds Luddington. "There's a strength they have in each other, you know?"

Although she calls Alex's Season 16 premiere re-proposal "symbolic," Luddington teases that "there would be no fun in not showing some sort of vows take place." As for what else lies ahead for the couple, the actor admits she "desperately" wants to see them have babies — or a dog or a fish.

"I just honestly want them to have something they have to take care of that's not just a plant that they killed," she jokes.

With Jo taking on the new role of general surgery attending at Grey Sloan this year, Luddington says that Jo will be "getting her groove back" all season. Using the tools she learned in treatment and therapy, the character is regaining confidence and the actor is "excited for her to get her sea legs" in the new position to continue "making strides in her career."

What Luddington ultimately hopes fans take away from Jo's storyline, however, relates to removing the stigma surrounding mental health: "I think one of the biggest messages that we want to tell everybody is that there's so much strength and power in reaching out and getting yourself the help you need."

By sharing her story, Luddington, it seems, will be able to help bring healing off screen and well as Jo does on Grey's.