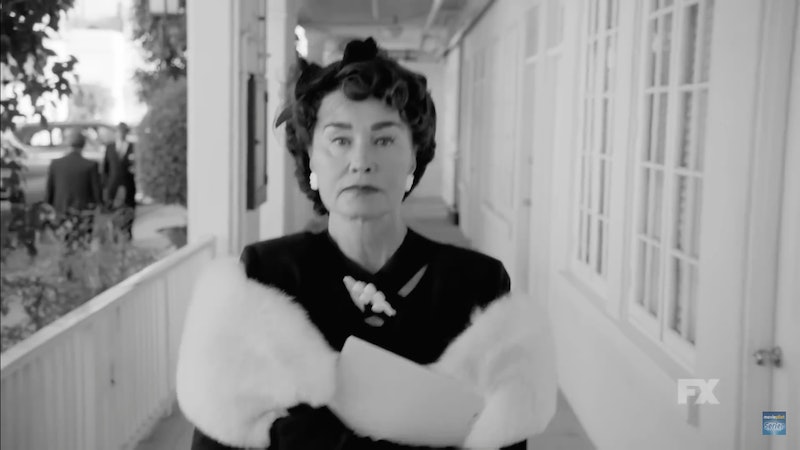 Joan Crawford, in addition to being one of Hollywood's biggest stars, was a legend for her witty and incisive comments. Joan Crawford's quotes about Bette Davis were some of her best and most long-lasting bon mots. Any occasion to use the phrase bon mots is an exciting one, and while Crawford and Davis were more rivals than enemies, their war of words was wildly entertaining. Over the course of their 50-plus year careers, both women had plenty to say about one another, and most of it wasn't nice.

As Feud demonstrates, their relationship waxed and waned over time, based on what was going on in their lives at different periods. While working together on Whatever Happened to Baby Jane?, they had a tentative peace, but, particularly afterwards, Crawford never made her difference of opinions with Davis secret. They clashed on life, fame, acting, and sent jabs back and forth to one another about those and many other subjects. Over the course of her life, Crawford obviously spoke publicly many times. Between live events she attended, interviews, and books written by her (the eccentric My Way of Life) and about her, there's plenty of material that shows the depths of this Feud.

"I'm the quiet one and Bette's explosive. I have discipline, she doesn't."

"She has a cult, and what the hell is a cult except a gang of rebels without a cause. I have fans. There’s a big difference."

On WHTBJs Release, According To The Guardian

"Tomorrow we’re going to do that goddamn beach scene, my big scene, but just watch, she’ll find a way to steal it. She always does. When you play crazy ladies you always walk away with the honors."

"Sure, she stole some of my big scenes, but the funny thing is, when I see the movie again, she stole them because she looked like a parody of herself, and I still looked like something of a star."

I Am Joan Crawford, By Charlotte Chandler

"Bette is a survivor. She survived herself."

Reportedly, According To The Warner Brothers Archive

[Regarding Star, a film where Davis plays a Crawford-esque actress.] "Of course I had heard she was supposed to be playing me, but I didn't believe it. Did you see the picture? It couldn't possibly be me. Bette looked so old, and so dreadfully overweight."

"Bette, in an interview, referred to me as a 'movie star' and herself as an 'actress.' I still wonder what the hell she meant."

"So I had no great beginnings in legitimate theater, but what the hell had she become if not a movie star? With all her little gestures with the cigarette, the clipped speech, the big eyes, the deadpan? I was just as much an actress as she was, even though I wasn't trained for the stage."

Reportedly, According To KQED Arts

"Miss Davis was always partial to covering up her face in motion pictures. She called it art. Others might call it camouflage — a cover-up for the absence of real beauty."

"I don’t hate Bette Davis, even though the press wants me to; I resent her. I don’t see how she built a career out of mannerisms instead of real acting ability. She’s a phony, but I guess the public likes that."

"Poor Bette! She looks like she’s never had a happy day… or night, in her life."

"She’s practically directing the picture [Hush, Hush, Sweet Charlotte] for him right in front of me, so God knows what else she’s up to behind my back. I might wind up on the cutting-room floor."

"She acted like [What Ever Happened to Baby Jane?] was a one-woman show after they nominated her. What was I supposed to do, let her hog all the glory, act like I hadn't even been in the movie? She got the nomination. I didn't begrudge her that, but it would have been nice if she'd been a little gracious in interviews and given me a little credit. I would have done it for her."

[Regarding the rumor that she weighted herself down during a scene.] "Weights! And have Bette tell everyone I was as heavy as an elephant. Absolutely not. I may not have made it as easy for her to lift me out of the bed as I could have, at least at first, but when you're a pro you get over any animosity you may feel and help your fellow player out. It simply didn't happen."

Live At Town Hall, Legendary Ladies Of The Movies

"No... no, let me explain that please. Uh, Bette is a... is of a different temperament than I. She has to yell every morning. And, so, I just sat and knitted. I knitted a scarf from Hollywood to Malibu."

"I must say that I read recently that Bette Davis said 'pictures are gone forever,' and I think she's quite right. Television has taken over ... There's no material left for motion pictures. And the movies of the week, which Miss Davis quoted, uh, she's right again. ... And I'm sad to say that, 'cause everything I have in this world ... was given to me by the motion picture industry."

This shows that not everything Crawford said about Davis was a total insult, but that this feud was bitter enough to, well, base an entire television series around. Plenty of those witty quips offered during Feud are either direct quotes or loose adaptations of the real things that she actually said.