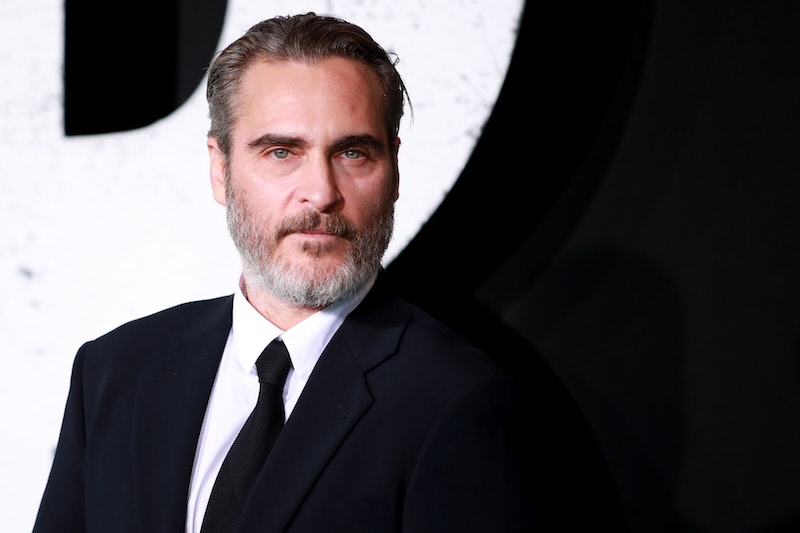 Joaquin Phoenix has a history of awkward talk show moments, but his most recent appearance on Jimmy Kimmel Live! might not have been quite as uncomfortable as it appeared. Joaquin Phoenix's Joker outtake rant, which host Jimmy Kimmel appeared to surprise the actor with during the Oct. 1 episode, wasn't actually a shock to the actor. And while this bit could be viewed as just another publicity stunt, it also helps to perpetuate the common myth that playing the DC villain has a long-lasting, negative impact on those who decide to take on the role.

While chatting with Kimmel about Joker — which offers up a different origin story for the legendary comic book character — Phoenix revealed that he and the crew "had a good time," while making the blockbuster. In response, Kimmel showed an "outtake reel" that he claimed to have received from director Todd Phillips, featuring Phoenix yelling at a cinematographer named Laurence Sher while in character as Arthur Fleck. "The constant whispering, just shut the f*ck up, dude," Phoenix says in the clip. "I’m trying to find something real."

Later in the outtake, the Oscar nominee called out the cinematographer for calling him "Cher," behind his back. "I know you started the f*cking Cher thing, Larry. ... Like I’m a f*cking diva. It’s not even an insult. Cher, really? Singer, actor, dancer, fashion icon — how’s that a f*cking insult?" Though Phoenix appeared surprised and embarrassed by the clip, even offering up an apology to the camera, the actor's rep told Entertainment Weekly that the video "was a joke outtake," and the entire moment was planned ahead of time.

Phoenix's on-set meltdown — and subsequent on-air apology — may not have been the real deal, but it's far from the first time that the actor was rumored to have caused conflict on the Joker set. In a recent profile for Vanity Fair, Phillips claimed that Phoenix refused to do a read-through of the script with the rest of the cast, much to the dismay of costar Robert De Niro. "Bob called me and he goes, 'Tell [Phoenix] he’s an actor and he’s got to be there, I like to hear the whole movie, and we’re going to all get in a room and just read it,'" Phillips recalled to the outlet.

He continued, "And I’m in between a rock and a hard place because Joaquin’s like, 'There’s no f*cking way I’m doing a read-through.'" Phoenix ultimately gave in, though the director revealed he immediately left afterwards to have a cigarette, and needed De Niro to calm him down.

Phillips also recalled how Phoenix would often become frustrated with his performance, and walk off the set. In a conversation with The New York Times published in September, the director added, "In the middle of the scene, he’ll just walk away and walk out. And the poor other actor thinks it’s them and it was never them — it was always him, and he just wasn’t feeling it." Though Phillips explained that Phoenix would always come back after a breather, he added that the actor was a "consummate professional" during his scenes with De Niro, which is a direct contrast to Phillips' comments about his star's behavior with other actors.

All of these anecdotes and jokes about Phoenix's reported behavior on the Joker set might seem harmless, but they also contribute to a myth around the film and the sacrifices that Phoenix made to give a great performance. While audiences love stories of actors going to extreme lengths in the name of method acting in general, the role of the Joker in particular comes with a reputation for outlandish antics and distressed behavior.

Heath Ledger died shortly after playing the Joker in The Dark Knight, earning a posthumous Oscar for his work, which was used to perpetuate the idea that the character drove him to madness. During the filming of Suicide Squad, Jared Leto reportedly gifted his costars with live rats and used condoms, and freaked out director David Ayer with his intensity. Now, these reports of Phoenix's behavior continue to add to the mythos that playing the Joker takes a toll on any actor brave enough to attempt it, and adds a sense of realistic insanity to Joker ahead of its release. Using his appearance on Kimmel to add to the joke about his intense on-set behavior just adds another layer to that idea — after all, the performance Phoenix gave must have been incredibly special to justify that meltdown.

A female actor or an actor of color would likely not be able to get away with "diva"-like behavior, such as storming off the set or yelling at the crew. But in this case, it just serves to bolster this popular idea. Phoenix's appearance on Kimmel was a bit, and one designed to help sell Joker's intensity, but it underlines the idea that playing the Joker is just as much about upholding the mythos as it is about the performance itself.