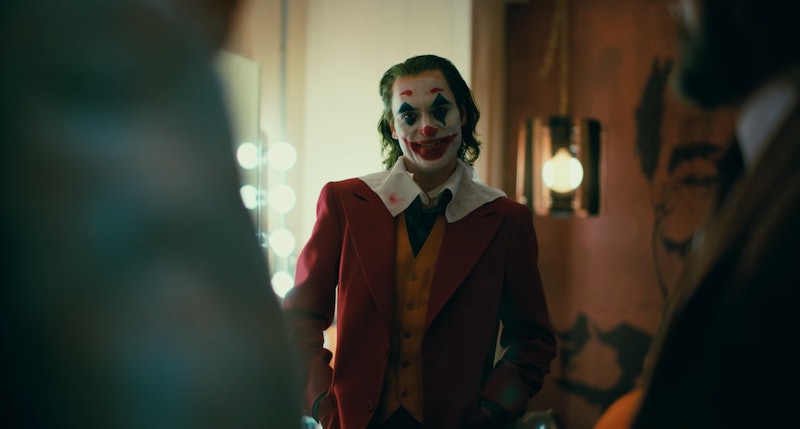 If you're scared of clowns, prepare yourself, because the new Joker trailer featuring Joaquin Phoenix is full of them. The new teaser highlights Phoenix's role as the titular character, also known as Arthur Fleck. And, based on the first full-length trailer, there's no denying Phoenix was the right man for the job. Fans will agree, he brings the DC Comics villain to life in a whole new and unforgettable way.

The film, set for an Oct. 4 release, is an original standalone story focusing on Arthur's journey and how he becomes the Joker, one of the most famous comic book villains of all time. The trailer opens up with Phoenix as Arthur sitting on a bus making funny faces at a child. He appears to simply be a man who wants society to accept him, all while living out his dream as a stand-up comedian. However, as fans know, Arthur's life is far from filled with smiles and laughs.

You'll quickly see in the video that Arthur is an unhappy man, who not only is made fun of by others, but gets beat up by a group of individuals. As a clown-for-hire by day, he's not exactly living his best life, nor do others see it that way, either.

At one point in the trailer, after a Department of Health social worker informs Arthur they won't meet anymore, he declares, "You don't listen do you? You just ask the same questions every week. 'How's your job?' 'Are you having any negative thoughts?'" He then adds, "All I have are negative thoughts."

Eventually, Arthur takes on the Joker persona. He's shown painting his face with clown makeup and also donning the villain's iconic outfit. He begins to feel better about himself and says in a voiceover, "For my whole life, I didn't know if I even really existed, but I do. People are starting to notice."

In addition to Phoenix, Robert De Niro and Deadpool 2's Zazie Beetz also star. De Niro plays a television host named Murray, who takes a jab at Arthur on the air. As the Joker, Arthur ends up appearing on Murray's show and asks him, "When you bring me out, can you introduce me as Joker?" As for Beetz, she plays Sophie Dumond. Sophie and Arthur appear to have a romantic relationship, as they are seen kissing in the trailer.

The film seems like it's going to be somewhat dark and possibly disturbing. Joker received an R rating by the MPAA for disturbing behavior, strong bloody violence, language, and brief sexual images, as reported by Screen Rant. This isn't the first time a comic book has been rated R. Deadpool, Deadpool 2, and Logan were all given an R rating.

According to Joker director Todd Phillips (Old School, The Hangover), he wanted to dive into one particular comic book villain and tell their story. Phillips told the Los Angeles Times in an interview published on Aug. 27 that the film slowly builds and doesn't start out heavy. "You’re not starting on 11,” he said. "You’ll get to 11 but we’re really starting on 2, and it goes from 2 to 3 to 4. It’s a slow burn."

One can only imagine what the film will be like as a whole, but based on the trailer, Phoenix's role as Arthur/Joker is definitely going to make headlines.

More like this
Everything To Know About 'Evil' Season 4
By Meguire Hennes
Gabby & Rachel Reveal How That 'Bachelorette' Rose Ceremony Twist Happened
By Grace Wehniainen
Everything To Know About 'RHOC' Season 17
By Brad Witter and Sophia Moore
The 'PLL: Original Sin' Creators Say A’s Identity Will Be “Very Clear” By The Season Finale
By Alyssa Lapid
Get Even More From Bustle — Sign Up For The Newsletter