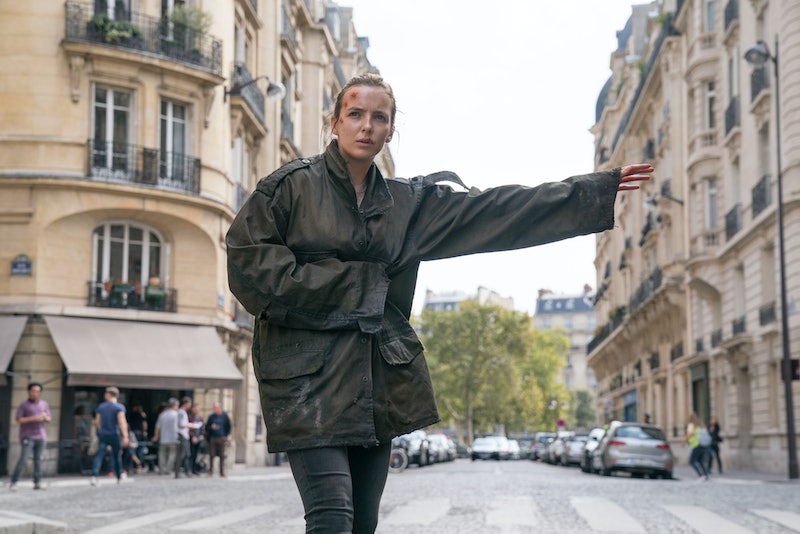 Straight up, I am in awe of Jodie Comer. Not only does Killing Eve prove that she'd be one hell of a spy, (and how different is that profession from acting, anyway?) it showcases her as one of the most impressive actors working in TV right now. She is a total chameleon, and what's stood out to viewers in a big way is how adeptly Comer's able to take on different voices and dialects, but just how does Jodie Comer do the accents, you ask? Well, she's given some advice for aspiring actors, or for those who are just curious, in some recent interviews.

Speaking at the premiere of Killing Eve season two on May 14, as Metro reported, the actor told the site that her accent acrobatics is simply down to her "growing up," and the way she was raised. Comer said:

"Me and my dad, if there was an advert with a silly voice on we’d always impersonate it around the house just joking around," she said, adding: "When I’m doing my own accent I find it harder to separate myself from the character; I don’t know why. You also don’t see many Scousers on the telly so maybe we need to change that up a bit!"

Yep, that's right. Comer's a Scouser, and it came as a bit of a shock to me too. That means she's grown up with arguably one of the most distinctive accents in the UK, making it even more astounding that she's able to go through so many accents without any hint of her Liverpudlian lilt.

Working with accents is something the actress has always enjoyed. Speaking to Metro about her audition for Killing Eve, Comer said they told her "about all the languages." She went on:

"You always get told if in an audition you get asked if you can ride a horse you say yes, even when you can’t, so that’s what I did with the languages,’ joked Jodie. ‘But that was equally terrifying but the exciting part of playing her."

She said something similar during her appearance on Ellen, as she revealed how unprepared she was for the multitude of accents thrown on her: "I was like 'oh yeah, fine,' and then when I got on set it was like 'oh, this is real," the Evening Standard reports. Once production started, voice coach Paula Jack helped her to perfect the accents, as the actress told Nylon on May 28, 2018.

Explaining the process of tying your tongue around a new accent, she told Nylon:

"I had a lot of voice clips sent to me in normal speed and really slowed down for me to try and get to grips of the vowels and stuff. Then, I wrote the words out as they sounded rather than how you spell them, just so that if I was ever on set and I needed a quick glance at my script, I knew the pronunciation."

While U.S. viewers are already being treated to more accent switching from Comer, with series two of Killing Eve currently airing in the States, UK viewers will have to wait a bit longer to hear it in all its glory, as the Radio Times slates its arrival for sometime in June, although an exact date is yet to be confirmed.