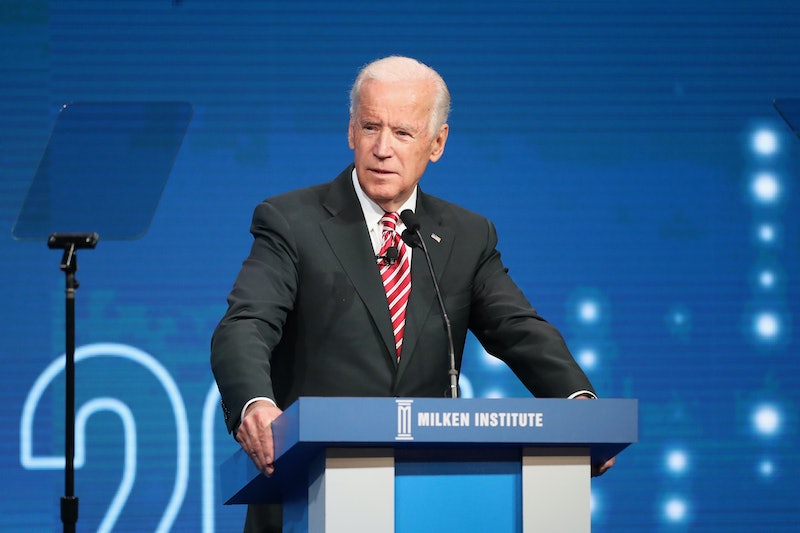 Former Vice President Joe Biden shared a message of hope at the Democratic Leadership Blue Gala held in Hollywood, Florida, recently. After Hillary Clinton's defeat in the 2016 presidential race, many Democrats and left-leaning progressives debated whether the party's political message was too polarizing to be effective for the American working class. Taking issue with this approach, the former vice president voiced his disagreement.

Contrary to most pundits, Biden believes progressive Democrats can win working class votes. It's a much-needed point shared by a prominent politician in the aftermath of the 2016 presidential race that stunned Democrats across the country.

While speaking to a massive crowd at the gala, Biden highlighted the constantly-discussed issue among Democrats involving "this phony debate going on [...] the Hobbesian choice that we're given — we either become less progressive, and focus on working folks, or forget about working folk and become more progressive." In case you didn't know, a "Hobbesian choice" — technically known as a "Hobson's choice" — is a difficult situation in which "the only options being to either accept or refuse the offer that is given to you."

To Biden, the need to bolster progressivism and win the support of working class America are not mutually exclusive: "There is no need to choose, they are not inconsistent," Biden explained.

Biden reminded the cheering crowd that those who voted for Donald Trump in 2016 were the same people who voted for Barack Obama in 2012: "These folks we're talking about who left us — they voted for a black man named Barack Obama!" (However, a study published by the polling company Rasmussen Reports actually showed that only somewhere between 11 percent and 15 percent of those who supported Obama in 2012 went ahead and cast votes for Trump in 2016.)

The former vice president made a point to remind his audience that working class Americans feared losing their jobs to automation. "They're worried that they won't be able to keep up," Biden said. The anxiety surrounding the fear of digitization of jobs, according to Biden, is what haunts working class Americans. He spoke of how that anxiety can transform into alienating forces of xenophobia and hatred. "Anyone not like you can become the scapegoat," Biden told his listeners.

The speech was well-received by the crowd present at the Leadership Blue Gala as hundreds and hundreds cheered for Biden. His note can be seen as a vital message shared during a time where many left-leaning policy thinkers and commentators naively believe that supporting progressive values is incompatible with supporting the working class. And maybe with Biden's message, they might experience a shift in their paradigms.