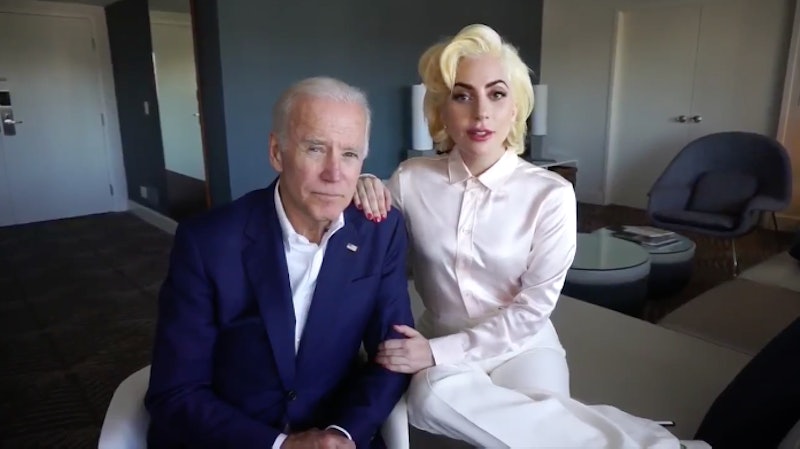 Former Vice President Joe Biden teamed up with Lady Gaga in the latest PSA video for the "It's On Us" campaign he helped launch in 2014 to stop sexual assault on college campuses. In the video posted to her Twitter account, Gaga, who has been vocal about her personal experiences as a sexual assault survivor, sat beside Biden to encourage everyone to step in when they know someone is behaving inappropriately. "We want to make it real clear: It's on us — it's on everyone — to intervene, to stop abuse when they see it and when they hear about it," Biden said in the video.

"It's On Us" is a rallying cry designed to spread the word that it's everyone's responsibility to work toward ending sexual assault. The former VP started the campaign with former President Barack Obama, who cited the fact that about one in five women are sexually assaulted while in college. But although the prevalence of campus sexual assault is high, the majority of incidents go unreported, which means most offenders go unpunished.

It's been three years since the Obama administration first told America that "it's on us," but Biden hasn't stopped reminding the nation — and Gaga continues to step in and help, too.

Gaga has spoken publicly about being raped at the age of 19. She didn't tell anyone for years because she blamed herself and she didn't want to be defined by the assault, she told Vanity Fair in 2015. But the musical icon hopes speaking out now will prevent others from going through what she did.

Biden and Gaga have been working together to stop sexual assault for over a year, and the former VP introduced her at the 2016 Academy Awards before she performed "Til It Happens To You" with dozens of sexual abuse survivors on stage with her. The song, which she recorded for the campus sexual assault documentary The Hunting Ground, explained what she went through as a survivor.

"I know the effects, the aftermath, the trauma — psychological, physical, mental," Gaga said in the new "It's On Us" PSA video. "It can be terrifying waking up every day feeling unsafe in your own body."

Sexual assault and harassment obviously aren't problems isolated to college campuses, and Gaga talks about how male music producers can abuse their power when working with female artists in the new Netflix documentary about the singer.

"Since those men have so much power, they can have women in a way that no other men can," she said in Gaga: Five Foot Two without mentioning anyone by name.

Allegations that filmmaker Harvey Weinstein sexually harassed and assaulted women for decades rocked Hollywood earlier this month, and although he has denied engaging in any sexual activity without consent, he was ousted from his company and expelled from the Academy of Motion Pictures Arts And Sciences. Since claims about Weinstein began surfacing, other men in film, TV, media, and politics have been accused of inappropriate behavior. So, Gaga and Biden's reminder that it's on everyone to stop sexual assault adds to the many advocate voices currently trying to prevent abuse.

And on top of pushing people who witness or hear about misconduct to step in, Gaga also encouraged survivors to turn to a friend or loved one for help rather than going at it alone.

"But we're here to remind you that it's important to reach out to someone in your life that you can trust, and to know that they will be there to help you; there will be someone to listen," she said in the video. "Because you know what? It's on us."