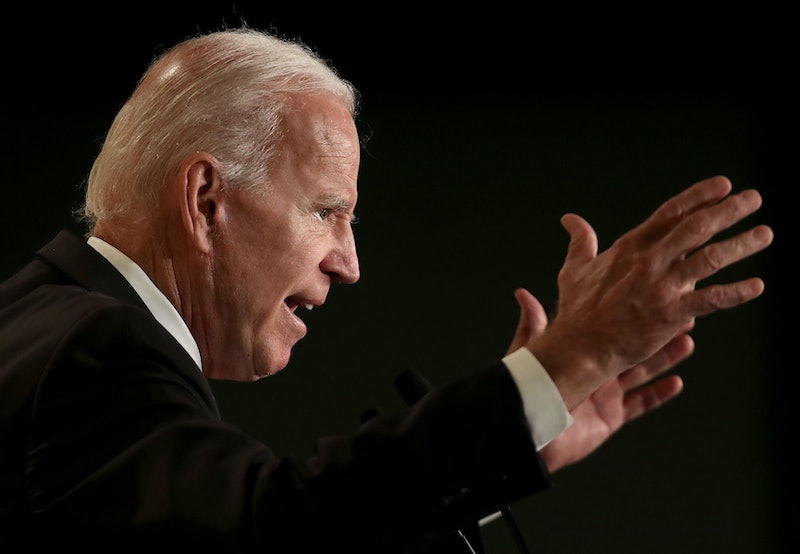 On Sunday, former Vice President Joe Biden responded to allegations of inappropriate touching made by Lucy Flores, the former Democratic nominee for lieutenant governor of Nevada. She wrote an essay published Friday on New York magazine's The Cut website. She said Biden made her feel "uneasy, gross, and confused" when he allegedly kissed her head in 2014 just before he gave a speech at a campaign rally in support of her and other Nevada Democrats. Biden has responded saying he didn't feel that he'd acted inappropriately.

"In my many years on the campaign trail and in public life, I have offered countless handshakes, hugs, expressions of affection, support and comfort," Biden said in a statement. "And not once — never — did I believe I acted inappropriately. If it is suggested I did so, I will listen respectfully. But it was never my intention."

Biden also reflected on where society is now, following the #MeToo movement. "I may not recall these moments the same way, and I may be surprised at what I hear," Biden wrote. "But we have arrived at an important time when women feel they can and should relate their experiences, and men should pay attention. And I will."

This is not the first apology the former vice president has had to offer as he looks to join the presidential race. Biden has been criticized in the past for his handling of the Anita Hill hearing, particularly for not protecting her from accusatory and unfair questioning as he was the chair of the Senate Judiciary Committee.

For that, he has apologized many times, most recently last week. "To this day, I regret I couldn’t come up with a way to get her the kind of hearing she deserved, given the courage she showed by reaching out to us," Biden said at the Biden Courage Awards in New York on Tuesday, an event organized for those working to fight sexual assault on college campuses.

Biden in the past has legislatively worked to advance women's rights. Notably, he sponsored the Violence Against Women Act. Biden's statement said he'd continue to work with women in mind:

I will also remain the strongest advocate I can be for the rights of women. I will fight to build on the work I've done in my career to end violence against women and ensure women are treated with the equality they deserve. I will continue to surround myself with trusted women advisers who challenge me to see different perspectives than my own. And I will continue to speak out on these vitally-important issues where there is much more progress to be made and crucial fights that must be waged and won.

Biden is expected to join the pack gunning for the 2020 Democratic presidential nomination soon, likely by Easter. He told supporters privately that he planned to run, according to NBC News. Many of his soon-to-be opponents have said he will need to address this allegation on the campaign trail should he declare his candidacy.