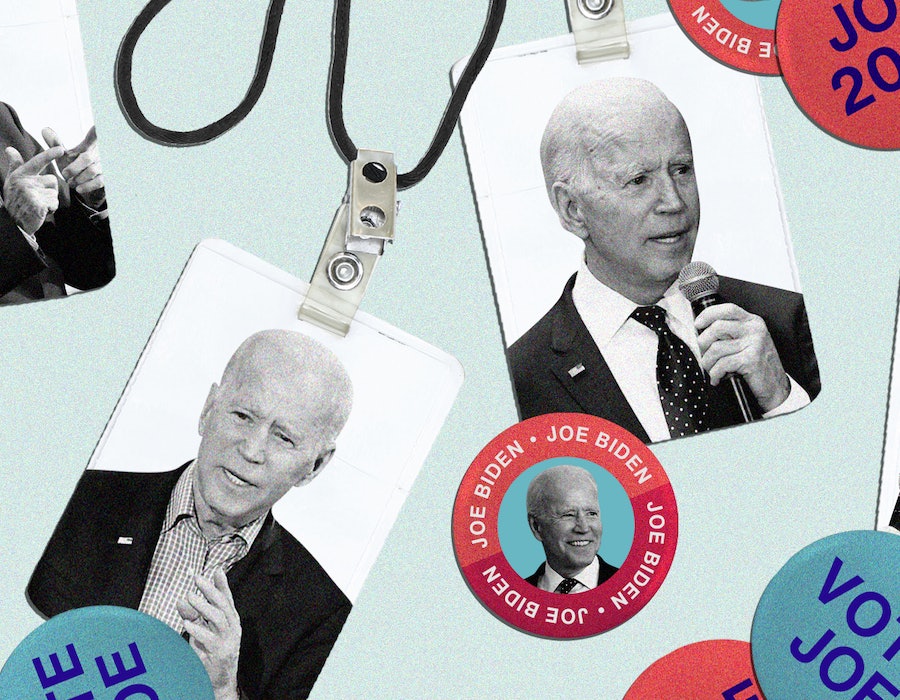 In March 2019, Isabel Aldunate was working as the deputy national press secretary for Sen. Chuck Schumer. When a chief of staff for a congressman reached out to the Maryland native about an open position, she went to interview — but was later told the role had changed. She was now overqualified. “He asked me, ‘What else have you been thinking about?’ and I told him I’d love to work on a presidential [campaign]," Aldunate says.

He came through: Shortly after, the University of Maryland, Baltimore County alum scored a phone interview with a member of Vice President Joe Biden’s campaign. Now, Aldunate, 26, has a dual role on the team: She’s both the deputy director of strategic communications and the Hispanic media press secretary. Here, she tells Bustle what it’s like to juggle two jobs at once.

Can you explain your jobs to me?

I wear two hats. In surrogate communications, I get our surrogates [high-profile people who stump for the candidate] and endorsers in print, on radio, or on TV. I also write press releases, op-eds, talking points, and statements. On the Hispanic media side, I deal with inquiries from outlets like Univision and Telemundo, or any of the national outlets, such as the New York Times, [when] they want to [cover] anything in the Latino space.

I also book interviews for the VP on Hispanic media. I’ll give background about who’s interviewing him [and] the purpose of [each] interview. For example, if it’s a small station in California, it would be “this is to reach out to the Mexican-American audience.” I’d tell him what things to be aware of, what kind of questions they’ll [likely] ask, and how we think he should answer.

I’m always working with the offices of members of Congress who’ve endorsed us, and with networks, [like] CNN, MSNBC, and Fox. I’ll start by reaching out to endorsers’ offices to see what their availability is for TV. I’m in constant contact with the networks. If they’re taking surrogates that day, I’ll send them a list of who we have available. Then I usually have a check-in with my supervisor [about] what messages we’re pushing that day.

How have things changed amid this global pandemic?

It’s been quite an adjustment. For one, we’re all teleworking. It’s forced our team to be more creative — how do we reach people who aren’t on the computer? How do we speak to different communities? Before, the vice president could just go to that community and have a rally. We're honestly just taking it day by day.

What’s your favorite memory of the vice president?

When I first started, I'd never met him. One day he was standing in the lobby of our office. I was starstruck — I’m very shy. He stopped me and said to the person he was on the phone with, “Hey, let me call you later.” [He] hung up and said, “Hi, what’s your name?” and asked what I do for him. I explained that I’m helping with Hispanic media, and he was like, “It’s so nice to meet you. Thank you for all the work you’ve done. I’m looking forward to working with you.” He shook my hand. I almost couldn’t believe it.

Do you have any rituals on the campaign?

Have you had to get your hair cut?

Not yet. I’m trying to grow my hair out. But you know, if it came down to it, and everybody else had no hair, I would get my hair cut.

What advice would you give to young women who want to work on a presidential campaign?

Be shameless in asking for help. Reach out to your connections and network. Call on former bosses who were good to you. See how they can help you, how they can plug you into their networks. And if you’re going to work for a candidate, you have to truly believe in that candidate. It’s so hard physically and mentally to work on a campaign, that if you don’t believe in the candidate themselves, it’s going to be even harder.

More like this
Jessica Simpson On The Time She Was Pursued By A Backstreet Boy & An *NSYNC Member
By The Editors
At 28, Rosie Perez Risked Her Career To Stop Playing Stereotypes
By Gabrielle Bondi
Eurovision Has Been Given A Whole New Look Ahead Of Its Liverpool Debut
By Bustle UK
8 Charities To Donate To During Black History Month
By Alexis Morillo
Get Even More From Bustle — Sign Up For The Newsletter
From hair trends to relationship advice, our daily newsletter has everything you need to sound like a person who’s on TikTok, even if you aren’t.