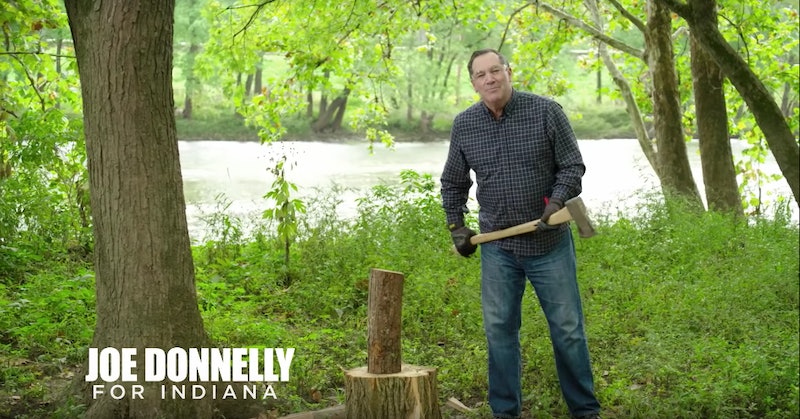 Is it Indiana's senator or a fictional character from the HBO series Veep? For some people, Sen. Joe Donnelly's campaign ad bore such striking similarities with fictional congressional candidate Jonah Ryan's of Veep, it's as if the two axe-wielding politicians shared notes on executing their videos.

Bustle has reached out to Donnelly's office for comment. On Twitter, Timothy Simons, who plays Ryan on Veep, already tweeted: "I'M SENDING THIS MOTHERF*CKER AS [sic] CEASE AND DESIST." The resemblance between Donnelly and Ryan's videos seems to have been first pointed out by Jerry Dunleavy on Twitter.

The Democratic senator, who's running for reelection in Indiana, can be seen in the video (titled "Axe") that was uploaded to YouTube on Wednesday. In the clip, Donnelly has a tough message: "For the most part, I'm an easy-going guy. But not when Mike Braun keeps lying about my record."

Just when the dramatic music begins, the senator can be seen raising his axe in the air and slamming it down a block of wood. The senator says that he didn't agree with fellow Democrats on everything. "I split with my own party to support funding for [Donald] Trump's border wall," Donnelly says.

Several observers have noted that the video is uncannily similar to Ryan's political ad from Veep. In the 24-second-long hilarious clip, a narrator for Ryan's "Chopping" video growls, "President Selina Meyer thinks she can chop our prosperity, our dignity, and our stature around the world. Well, someone is chopping back." A plaid-clad Ryan can be seen clumsily striking a block somewhere deep in the woods.

If Donnelly's support for Trump's border wall isn't enough to persuade Hoosier voters to align with him, he shares another tidbit about himself — and this time it's about war. "The liberal left wants to chop defense spending," Donnelly says. "No way. I'm not into a fair fight. I'm about giving our troops the edge."

When it comes to economics, Donnelly wants his viewers to know, "I voted to extend the Bush tax credits." And when he brings up Braun again, he says, "He ships jobs to China. We've got to cut that out." Throughout the entire video, Donnelly continues holding and periodically slamming his axe down.

In Ryan's video, an axe cuts a block of wood three times. It's the same shot over and over again, and maybe that's why it's so absurd and comical. That and Ryan's palpable awkwardness. Take a look.

Of course, there are differences between Donnelly and Ryan's videos. For instance, Donnelly seems to appreciate practicing safety while wood-chopping; he can be seen donning protective eyewear and gloves. On the other hand, you have Ryan who isn't wearing either item. He does, if it matters, have a puffy vest on.

The purpose of Donnelly's video was to send a clear message to Hoosiers about Braun. According to The Indianapolis Star, Donnelly's campaign manager Peter Hanscom said, "Joe will always be in favor of a secure border, funding for our troops, and a tax plan that actually puts the middle class first. Meanwhile, Rep. Braun continues to lie to Hoosiers about getting tax breaks of his own at the same time he chooses to make his auto parts in China, while American plants shut down."

This ad was intended to, according to Hanscom, "help cut through Rep. Braun’s lies and take Joe’s record of commonsense results directly to the voters." The fact that some people see glimpses of Veep in the video is most likely a funny coincidence.