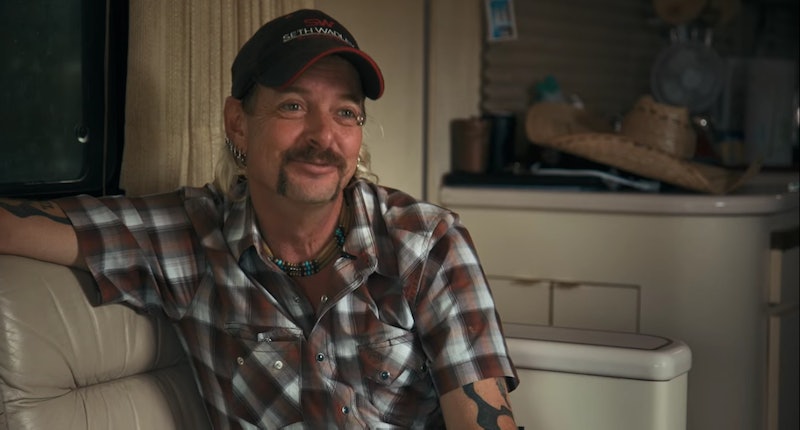 From Carole Baskin to Doc Antle, it seems like everyone featured in Tiger King has weighed in on Netflix's hit docuseries — except its star. And, though he's tough to get a hold of right now, Joe Exotic sent a message to Tiger King fans from prison, released by Netflix on Friday, April 3. In his short video message, the former zookeeper, real name Joseph Maldonado-Passage, told fans that he's focused on getting out of prison.

Maldonado-Passage is currently serving a 22-year sentence for two counts of murder-for-hire, as well as counts of animal abuse. And, though he has reportedly been put in quarantine for coronavirus concerns as of this week, he was apparently able to speak to Netflix on March 22. "You know, it would be nice if I could actually see me being famous out there," he said when asked what it's like to see the show take off. He also offered some advice to fans — "go sit in a cage with your animals for a week" — and thanked his husband, Dillon Passage, for his support. But, it was when he was asked if he had any specific message to fans that he made this bombshell statement: "I'm done with the Carole Baskin saga." And, just like that, a years-long feud came to a screeching halt.

This is a pretty major statement considering the fact that Maldonado-Passage is currently in jail for allegedly hiring someone to kill Baskin, his longtime nemesis. In fact, his feud with Baskin is the main focus of Tiger King's 7 episodes. Now that he's in jail, however, it seems Maldonado-Passage has other things to think about — mainly, getting out. "It's now time to turn the tables and Joe get out of jail a free man and exonerated from all these charges," he told Netflix.

Maldonado=Passage has been trying to clear his name for quite some time. According to The New York Post, he has begun publicly campaigning for a pardon from President Trump. And the success of Tiger King has kicked off a small #FreeJoeExotic campaign online, though a video clip of Maldonado-Passage lamenting the fact that white people cannot use the N-word put a damper on it. Even rapper Cardi B, who had jokingly tweeted about starting a Go Fund Me for him, took it back after seeing the clip.

Maybe he'll have better luck reaching other Tiger King fans now that he is speaking out.

More like this
Move Over, 'Sunset'! The Drama-Filled Trailer For 'Selling The OC' Is Here
By Nola Ojomu
'Indian Matchmaking's Arshneel Is Keeping His Potential Courtship With Rinkle Private
By Radhika Menon
'Selling Sunset's Jason Oppenheim Has A New Model Girlfriend
By Alyssa Lapid and El Hunt
Where Is Charlie Evens Now?
By Morgan Leigh Davies
Get Even More From Bustle — Sign Up For The Newsletter