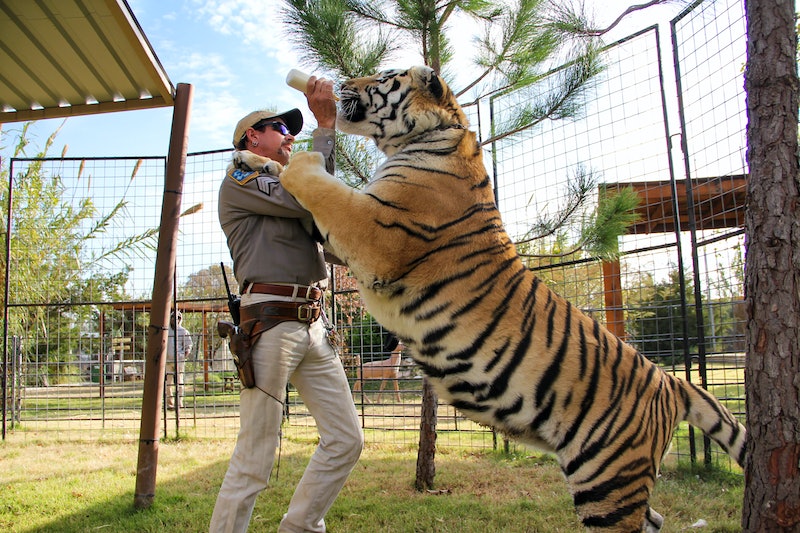 In the new Tiger King episode hosted remotely by Joel McHale, Joe Exotic's old acquaintances all said that they firmly believe Joe Exotic deserves his 22-year prison sentence. But Exotic (aka Joseph Maldonado-Passage) has maintained his innocence and is still trying to appeal his case. He filed an appeal on March 17 alleging that his arrest for allegedly hiring a hit man to kill his rival Carole Baskin was part of a larger "entrapment scheme" and a "malicious prosecution to further and (sic) animal rights agenda." He's suing for nearly $94 million in damages, though so far his lawsuit has suffered some major losses.

In Maldonado-Passage's civil lawsuit, he claimed that the case against him included false and perjured testimony, and that he was the victim of discrimination as "an openly gay male with the largest collection of generic tigers and crossbreeds." He also accused his prosecutors of "misinterpreting the law" and causing the death of his mother, Shirley Schreibvogel.

On April 7, U.S. Magistrate Judge Suzanne Mitchell delivered her report on the case, and her recommendation was simple: they should dismiss the "frivolous" appeal. Per Deadline, Judge Mitchell wrote that Maldonado-Passage doesn't even have a lawyer, and that his complaint was full of "poor syntax and sentence construction," failed to "cite proper legal authority," confused "various legal theories," and showed an "unfamiliarity with pleading requirements."

Within a day, Maldonado-Passage's poorly worded appeal hit yet another major roadblock. On April 8, U.S. District Judge Scott Palk also rejected Maldonado-Passage's requests that he recuse himself from presiding over the civil case, since Maldonado-Passage claimed that Palk was biased against him. Palk wrote that he "carefully reviewed the grounds upon which plaintiff seeks recusal and finds those grounds are insufficient to warrant the requested relief." The judge concluded that "there is no objective basis upon which to find judicial bias or lack of impartiality," and so therefore Maldonado-Passage's motion to recuse was denied.

Judge Mitchell's recommendation for a dismissal seems to suggest that the appeal is truly dead in the water, but it appears that Maldonado-Passage is still holding out hope for a pardon from President Trump. A few hours after Judge Palk delivered his report, a New York Post reporter asked Trump if he would pardon Maldonado-Passage.

"I know nothing about it. He has 22 years for what? What did he do?" Trump asked. Though he hasn't seen the series at all, Trump later said he would "take a look" at the case.

Maldonado-Passage seems determined to fight his 22 year sentence, but his old acquaintances maintain it's a null cause. As Kelci "Saff" Saffery told McHale, "Justice was served."