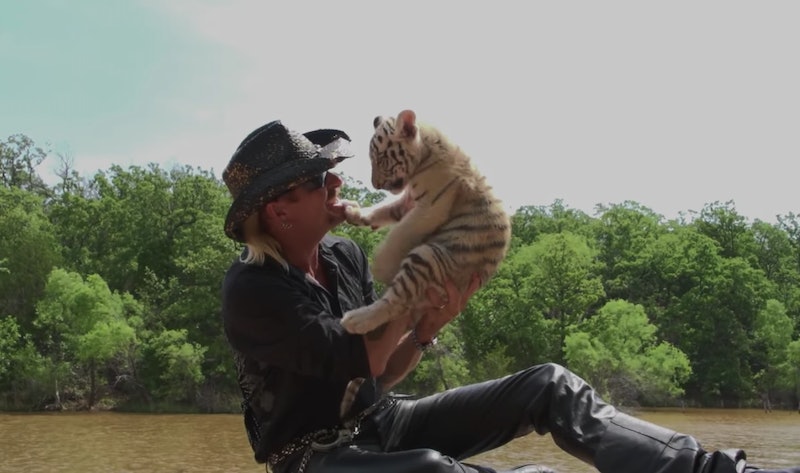 In Episode 1 of Netflix's bonkers docuseries, Tiger King, Joe Exotic explains that he's made two albums: I Saw a Tiger and Starstruck. "There's 28 songs and 16 music videos," he tells the camera. And while his songs aren't on Spotify or Apple Music, Joe Exotic's music videos are available on YouTube, where audiences can watch the full versions of "I Saw a Tiger" and "Here Kitty Kitty," among others.

While it's never addressed in the Netflix series, that's not Joe Exotic singing. According to Vanity Fair, Danny Clinton is singing in the tracks, while Vince Johnson is the musician. Joe reached out to Clinton and Johnson, per the article, asking them to write some songs pro bono on what he claimed was going to be a huge reality show. They agreed to do it for the exposure, having no idea Joe would pretend that he had sung the songs himself. "It was a couple of months and two or three songs [into the collaboration] when I was on YouTube one night and just happened to look up Joe Exotic," Johnson told the magazine. "And there he was, lip-syncing and acting like the ghost of Elvis [in the music videos]."

But despite the fact that these men are both credited on Joe's songs, the former zookeeper was adamant that he was the one singing. "[Joe] couldn't even hold a tune," TV producer Rick Kirkham, who is interviewed in Tiger King, told the publication. "It was just so ludicrous. It was a big joke within the crew and staff that it wasn't him [singing in the videos] — but he was damned insistent to anyone and everyone, including us and my studio crew, that that was him."

But although Joe's not the one singing, here are some of "his" songs, many of which are featured in Tiger King.

This is the most prominently featured song in the docuseries, and for good reason: It's an ear worm. Per Vanity Fair, "I Saw a Tiger" was the first song that Johnson and Clinton recorded for Joe. Choice lyrics include, "I saw a tiger / Now I understand / I saw a tiger / The tiger saw a man."

Tiger King Episode 3 explains that "Here Kitty Kitty" was a diss track aimed at Joe's nemesis Carole Baskin, who he claims murdered her late husband, Don Lewis, and fed his body to the cats. In Joe's music video, he even has a Carole lookalike feeding meat to the tigers. It's absolutely savage.

"Do You Ever Wonder What Love Could Do?"

This one is a real tear jerker — if only because you feel bad for all the animals in cages.

Perhaps the most uncomfortable moments involving Joe's story in Tiger King are the ones with his (very young) husbands, many of whom he was "married" to concurrently (in Oklahoma, same sex marriage was not legalized until October 2014). Joe's third husband, John Finlay, was only 19 when they met, per Texas Monthly. (This was a trend for Joe: his successive husbands, Travis Maldonado, and Dillon Passage, were similarly young).

Eventually, the docuseries explains that Finlay left Joe for a G.W. Zoo employee, whom he had gotten pregnant. This music video for "First Love" is dedicated to Finlay and features footage of the two men.

All of the above makes this one especially hard to swallow.

In this video, you can really see that Joe isn't singing — or even lip synching very well.

"This Is My Life"

This Aug. 2014 music video is sampled in Episode 6, when Joe leaves the G.W. Zoo for good. However, the song itself is dedicated to his now ex-husband, John Finlay. "To all of my fans, family and John Finley [sic] I love you all so very much John you will always be my life," the YouTube description reads.

At least in this one, he credits the songwriter.

For those who can't get enough of Joe's music, there are plenty of other music videos on his YouTube channel, JoeExoticTV. But be warned: It's a wild ride.