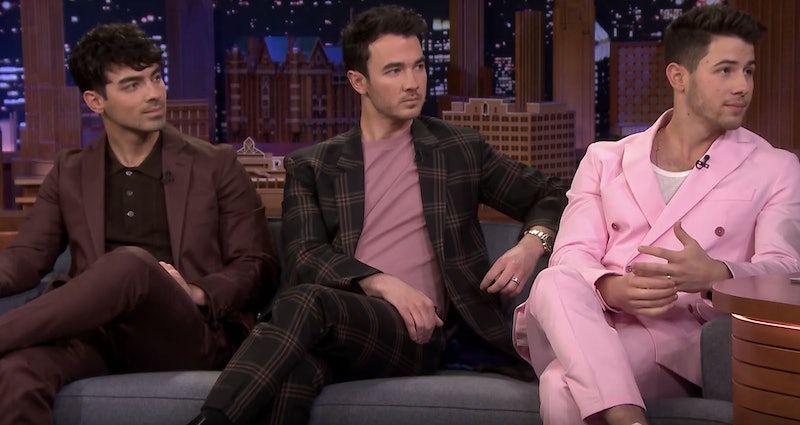 Hot off the June 7 release of their first album in years, Happiness Begins, the Jonas Brothers appeared on The Tonight Show with Jimmy Fallon talking everything from Kevin Jonas' two daughters, Nick Jonas' change in phone numbers, and, of course, their comeback. They also talked about their significant others, which set the stage for Joe Jonas' Game Of Thrones spoiler prank, which caught his brothers way off guard.

During the interview, which aired on June 12, host Jimmy Fallon said to Joe that he'd heard the singer only married Sophie Turner for the Game of Thrones spoilers. As if! (Turner, of course, starred as Sansa Stark on the series for 10 years.) But of course, it was all in good fun, until Joe responded, "Now I'm just trying to figure out if I can write a song for the next season and she'll tell me—" This was followed by an "Oh," and Joe then became the real-life version of the Pikachu surprised face meme, implying that he'd let slip news about an upcoming new season of GoT, despite the show airing its finale in May.

"Spoiler alert," Fallon joked to Joe's still-shocked face, while Nick looked at the camera and Kevin looked like his brother had just done something illegal. "Wait, is there another season?" Nick asked. Once it was established that Joe had just been joking, Nick added, "My heart stopped." Join the club, Nick! Maybe Joe should write a GoT-themed song to make it up to us.

While there definitely won't be another season of Game of Thrones, unfortunately, Joe did have GoT spoilers before the show aired thanks to his new-wife Turner. In fact, he knew what happened in the Game of Thrones finale a year and a half ago. During an interview with Sway on MTV'sTRL June 7, Joe said that he had to be closed-lipped about it all, signing many NDAs. "I wanted to keep it a secret just like everyone else was a part of it," Joe said. "We loved it. Speaking for the three of us, I loved the ending, so many people worked so hard on that show," he continued, before someone in the audience yelled "Queen of the North."

During their Tonight Show appearance, the brothers also talked to Fallon about Joe's wild bachelor party in Ibiza, Spain, during a game of "Know Your Bro." Joe apparently tore his and two other guys' shirts off, and the cops were called three times on the JoBros. He also wore a cardboard box as a bandana, and if you're still trying to figure out the mechanics of that, you're definitely not alone. To be honest, it almost sounds more complicated than an episode of Game of Thrones, and that's saying something.