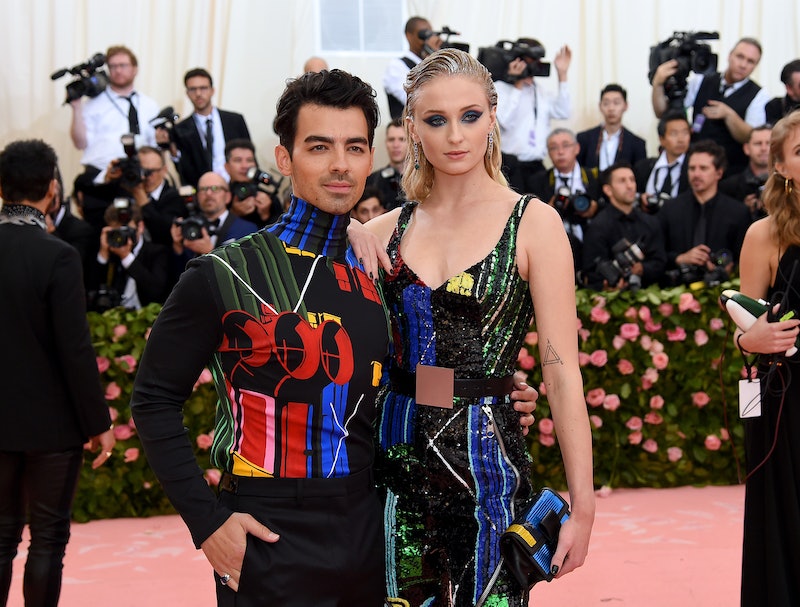 Shortly after returning from their honeymoon, the Jonas-Turner family has reportedly had a loss. According to a report from TMZ on Friday, July 26, Joe Jonas and Sophie Turner's beloved dog Waldo has died, with the outlet reporting that the Alaskan Klee Kai was struck and killed by a car in New York City.

Waldo was reportedly on a walk with the newlywed's dog walker on Wednesday when he reportedly "got spooked by a pedestrian" and managed to reportedly break free from his leash and run into the street. According to TMZ, the pup was reportedly then hit by a car, and taken to a hospital where he later reportedly died. (Bustle reached out to Jonas and Turner's reps for comment, but have not received a response.)

The NYPD released a statement to Bustle that confirming that a dog died in a manner that matches TMZ's description, but did not offer comment or confirmation that Jonas and Turner owned the dog in question. "A police report, was filed for a motor vehicle collision involving a dog struck at Bowery & Broome Street, within the confines of the 5th Precinct," the NYPD said in a statement. "On Friday, July 26, 2019, a female complainant filed a report stating, on Wednesday, July, 24, 2019 at approximately 2335 hours, a vehicle struck the dog, did not stop and left the scene. The dog was brought to the hospital where the dog later died. There is no vehicle or driver description."

The statement continues, "We cannot confirm names of the person filing the report nor can we confirm the owners of the dog. No further information is available." TMZ reported that while the incident reportedly occurred on July 24, the newlyweds told police that they didn't file an incident report until two days later because they were distraught over their dog's tragic death.

According to People, the couple — who tied the knot in France on June 29 — welcomed Waldo Picasso into their family in April 2018. He was the brother of their other Alaskan Klee Kai, Porky Basquiat, who was a surprise gift to Turner from Jonas. Turner announced the news of their newest addition on Instagram, sharing a photo of the two dogs together along with the caption, "Welcome to the family @waldopicassojonas."

In November 2018, the "Sucker" singer gushed about his dogs to People, explaining that the lucky pups got to experience all of the perks that come with having famous owners. "They live a pretty fabulous life," Jonas said, adding that Waldo and Porky had been to "France, England, Canada, Amsterdam and all over America," as well as visiting the Game of Thrones set. "They have probably traveled more than most of my friends," he added. According to W Magazine, Porky Basquiat even attended Turner and Jonas' wedding, wearing a doggie tuxedo as part of the wedding party.

"Taking care of these two dogs has been so amazing," Jonas said about his beloved pups on Today back in December 2018. “In New York, it’s great too — there’s obviously a lot of dogs and amazing dog parks, so they love it. I love it. And it definitely feels like home when I’m done touring and I can go back and I see those two dogs — it makes me really happy. They definitely chill me out."

While reports of Waldo's tragic death have yet to be confirmed, losing any pet is incredibly devastating, especially under circumstances as heartbreaking as the reported car accident. Hopefully, Jonas and Turner will be able to have the time and privacy they need to mourn and honor their beloved pup's memory.