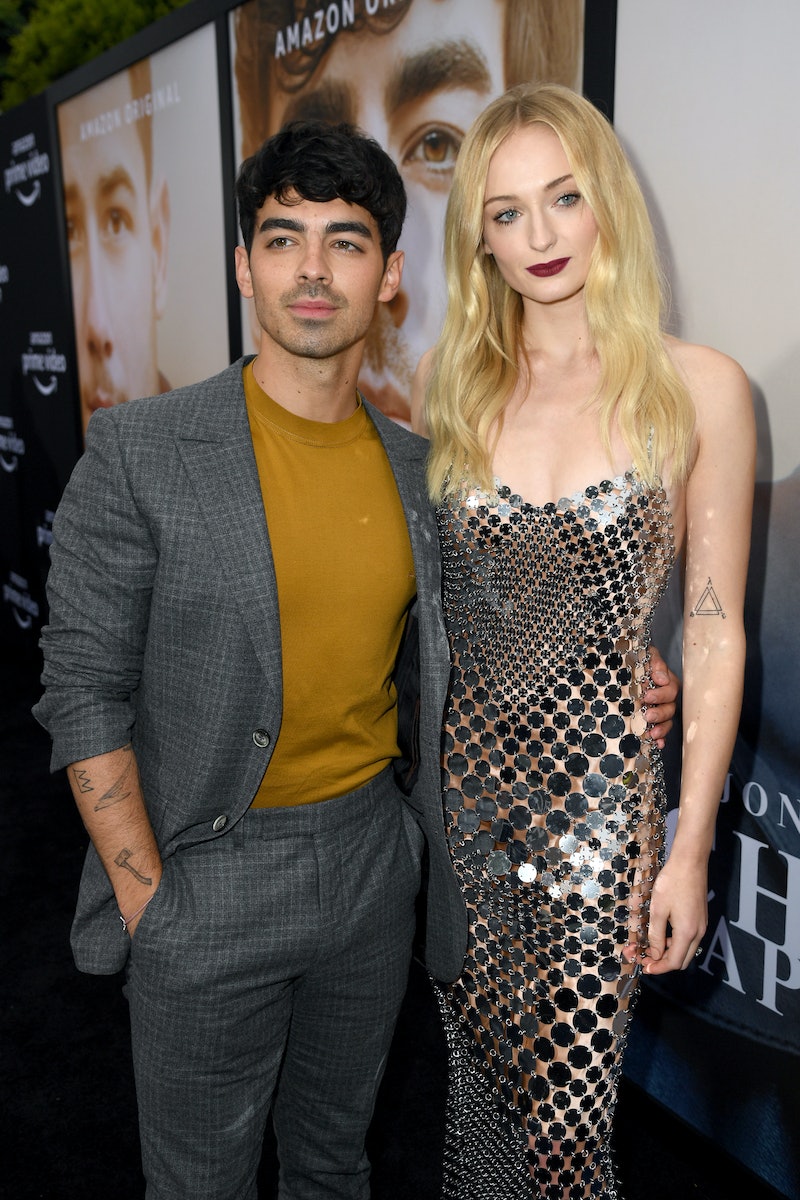 Now this is commitment. During the June 3 premiere for The Jonas Brother's Amazon documentary, Chasing Happiness, Joe Jonas took Sophie Turner's photo on the red carpet. He clearly will go above and beyond for the Game of Thrones star. Plus, the more pictures he has of his wife, the better, especially on a big night.

In an Instagram video posted by Jonas on Tuesday, you can watch Turner pose for photographers on the red carpet, while totally working it, of course. What makes her photo session even better is Jonas, who literally stood to the side of her with his phone and snapped a bunch of his own pictures. He captioned his post,

"Premiere Carpet Pro-Tip #1: Always make sure you get the shot."

Well, he definitely got the shot. Like all of the Jonas brothers and their spouses, these two have such a supportive and sweet relationship. In Chasing Happiness, Jonas opened up about falling in love with Turner. He said about meeting the Dark Phoenix actor,

"In finding myself, I was also able to find a partner. The impact of falling in love has made me want to be a better man, a better person, and ultimately made me a better brother."

Um, is this real life or a romantic comedy?

Turner feels the same way about her husband. The way Jonas loves her has impacted her life drastically. She revealed in Glamour UK's spring/summer 2019 issue,

"A lot of [my happiness now] is to do with being with a person I’ve fallen in love with, who loves me more than he loves himself, and who wants to see me find my own happiness. That was probably the biggest thing that pushed me to find who I am – and find my happiness in things other than acting."

In an interview with Harper's Bazaar UK published in March, Turner also gushed about the "Sucker" singer, "He’s lovely. He’s just the funniest. You wouldn’t expect he’s about to turn 30 this year. He’s the most fun, energetic, positive person I’ve ever seen. I’m pessimistic, so we balance each other out."

Turner and Jonas, who got married in Las Vegas on May 1 and will reportedly have another wedding sometime this summer, typically keep their relationship pretty private. Like Turner told Glamour UK about maintaining her privacy,

"I appreciate the private moments more than the public ones; I don’t go out as much as I used to. I’m a hermit. As an actor, it’s important to be able to dissolve into a character, to maintain some sort of anonymity and it’s hard if you’re dating a Jonas brother."

The couple has still managed to keep a good portion of their relationship out of the spotlight, which is definitely a feat when you're as famous as they are. Because they prefer to keep part of their lives to themselves, it's a special treat to not only hear Jonas and Turner talk about each other so personally, but to also see them interact in lovely ways on the red carpet.