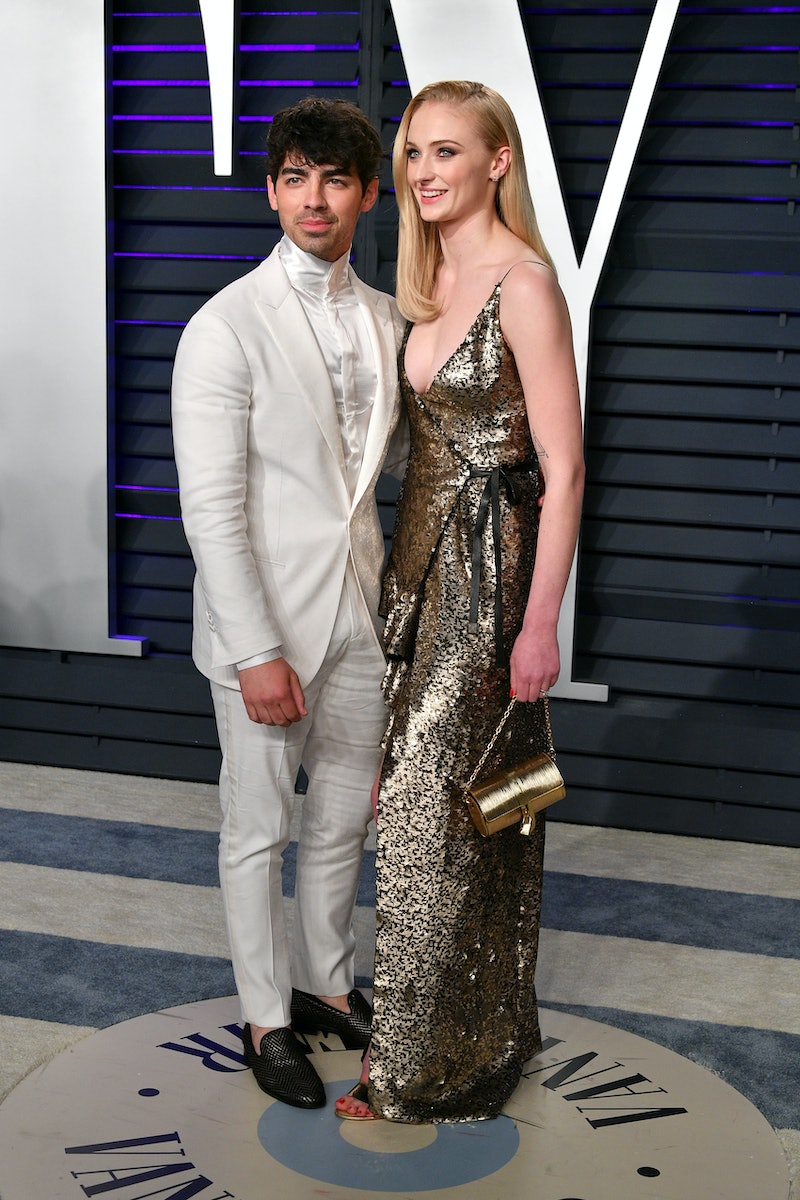 If you haven't heard the big news, Sophie Turner and Joe Jonas got married on Wednesday night in Las Vegas after the 2019 Billboard Music Awards, as Entertainment Tonight reported on May 1 after obtaining a copy of their marriage license. Seeing as the Game of Thrones star and the Jonas Brothers singer already tied the knot, will Turner and Jonas have another wedding? At this point in time, it's unclear what their exact plans are regarding either a second wedding or some type of celebration, but either possibility shouldn't be ruled out based on past comments the couple has made. Turner's reps confirmed the Vegas ceremony to Bustle, but declined to comment further on their future plans.

As revealed by Entertainment Weekly, and courtesy of Diplo sharing videos on Instagram Story, the Dark Phoenix actor and Jonas went to a chapel in Vegas, where they exchanged vows in front of family and friends. Kevin and Danielle Jonas and Nick Jonas and Priyanka Chopra were all in attendance, too. Oh, and yes, there was an even an Elvis impersonator who officiated the wedding.

Diplo captioned one of his many videos featuring Turner in an all-white ensemble and the "Sucker" singer in a suit, "Gonna hit up this wedding real quick." If that isn't enough, country duo Dan + Shay also joined in on the big day by singing "Speechless," while Turner walked down the aisle.

Now some fans may be confused, because both the actor and the musician previously made it seem like they were going to have a very different wedding compared to the one that just took place in Sin City. So, will this be their only wedding? Will they have another one or at least a party to celebrate? Again, it's not entirely clear what they have planned. That said, prior comments they both made about their wedding day can't be ignored.

First, during an appearance on The Late Late Show With James Corden in March with his brothers, Jonas said about marrying Turner,

He even said they were going to have a "flag rugby game at the wedding and a flag football game." Hmm... well the games definitely don't seem to have happened in Vegas. Plus, the "Cool" artist admitted they were having "a summer wedding," but it's not technically summer yet.

And to make the situation even more confusing, Jonas told late-night host James Corden that he didn't want more than one ceremony, unlike Nick and Chopra. After Corden asked him what he learned from his brothers' weddings, Jonas said, "And, for Nick, there were quite a few, but I would say stick to one. One and done."

As for Turner, she revealed to ET in early April that her real-life best friend and GoT costar, Maisie Williams, was one of her maids of honor. After ET informed the actor that Williams was trying to figure out what to wear to the wedding, Turner said,

At the time, Turner didn't discuss the identity of her second maid of honor.

Furthermore, on April 29, The Sun reported that Turner and Jonas were going to get married in an estate in France over Glastonbury weekend, which will be held this year on June 26 through June 30. A source reportedly "close to the couple" told the publication, "They plan several parties across four days and one will be an outdoor festival. They have been contacting some of their favorite artists to ensure it’s a star-studded affair." As for their supposed exact wedding date, The Sun reports that they will say "I do" on Saturday, June 29.

Who knows what Turner and Jonas have in store regarding another potential ceremony. There's a good chance their recent nuptials were simply spur of the moment and they still plan on having a bigger celebration, like they've already teased. If the couple does end up having a second wedding with all of their family and friends, there's no doubt it will be an unforgettable affair, just like them tying the knot in Las Vegas.

More like this
Adam Levine & Behati Prinsloo Welcome Their Third Child Together
By Jake Viswanath
Meghan Trainor & Daryl Sabara Are Expecting Their Second Baby
By Jake Viswanath
Hilary Duff's Husband Matthew Koma Has Her Name Tattooed On His Butt
By Jake Viswanath and Stephanie Downs
Harry Styles Is Performing At The 2023 Grammy Awards
By Jake Viswanath
Get Even More From Bustle — Sign Up For The Newsletter
From hair trends to relationship advice, our daily newsletter has everything you need to sound like a person who’s on TikTok, even if you aren’t.