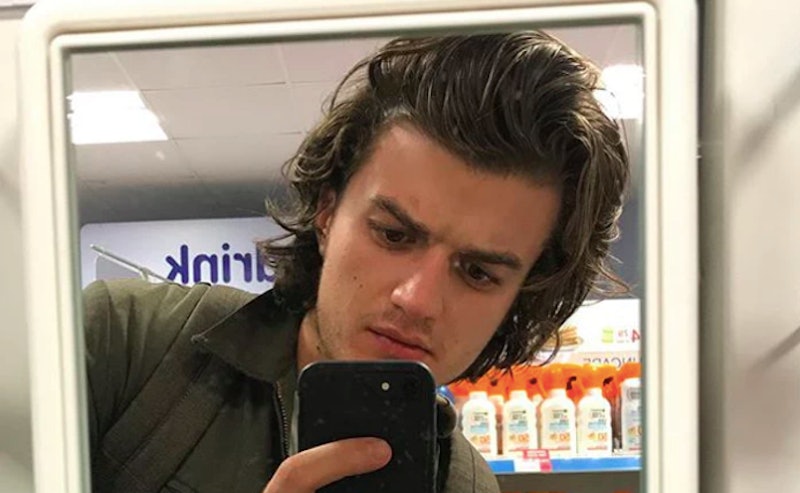 There are so many amazing things about Stranger Things Season 2 — don't worry, there's no major spoilers here if you haven't seen it — but rest assured that the characters are as lovable as ever. The breakout star of Season 2 is Steve Harrington, played by Joe Keery, who becomes quite the hero and definitely quite the heartthrob. It’s that hair, it just reels you right in! And off-screen, if it’s possible, Keery is even more charming than Steve. Though he’s not a Snapchat user, Joe Keery’s Instagram is fantastic and so fun. (He’s on Twitter, too, but doesn’t use it so much.) Plus, his Instagram handle is uncle_jezzy — who doesn't love good John Stamos reference? Another man with a gorgeous coif.

There are so many reasons Keery's Instagram is amazing. For one, he posts lots of great behind-the-scenes photos from the Stranger Things set. Keery really bonded with all of his co-stars, especially Gaten Matarazzo, who plays Dustin, and the cutest moments are him hangin' with all the talented kids from the show. He's also hilarious, loves a good mirror pic, and, oh yeah, he's in a great psych rock band called Post Animal.

Even though he became a star very much overnight after Netflix dropped Season 1 of Stranger Things,, Keery hasn't let it go to his head. In an interview with Esquire, he said he felt humbled and thankful for his newfound success: "It’s really cool to have this positive response when just two years ago I was just waiting tables trying to get any acting job — let alone on a show that everyone watches."

He's just here to enjoy it while it lasts. Here are 10 Instagrams (and, OK, one amazing tweet) that prove Keery is living his best life.

Keery and one of his on set little bros, the ever-charming Finn Wolfhard, sporting fantastic shades and holding two super cute puppers. Look at that grumpy, windblown pomeranian! This is truly a blessed image.

Trying On Some Specs

The better to see a demagorgon with.

Keery got his grub on with his Stranger Things 2 co-star Dacre Montgomery, who is almost unrecognizable when not dressed like his character, the villainous Billy the bully. The changes a mullet can make to a man! Keery notes he is enjoying his smaller meal. Maybe the size of your plate directly corresponds to how low cut your shirt is. No one's complaining!

Big Joe On A Little Bike

Celebrating The Holidays With The Keery Clan

Apparently Keery's whole family is beautiful and has great hair. They could be a family band. Props to all for rocking the hell out of those mock turtlenecks.

Joe Keery really did seem to have adopted all the Stranger Things kids on the set — and he's a great dad.

Keery and his bandmates thought he had a face so nice it deserved to be blown up approximately 400 percent. Is that the Seinfeld shirt he's wearing? If Keery sold these to the public he could make a killing.

The Woman Behind The Hair

Here's Keery cheesin' with his hairdresser on the set of Stranger Things. "Miss Evelyn in charge of making all my hair stand up. Such a lovely lady to work with!" he wrote. She does an amazing job, though, she does have a great canvas to work with.

The Master Of The Mirror Pic

Just one of Joe's many mirror pic selfies that truly capture the form. This one is captioned "King of #Swearwrods."

Some Amazing Candids From Set

Not All Heroes Wear Capes

Keery doesn't tweet much, but when he does, it's worth the wait.

Steve Harrington is the hero of Hawkins with great hair, and Joe Keery is a babe who is basking in the Stranger Things 2 glow and loving every minute of it.