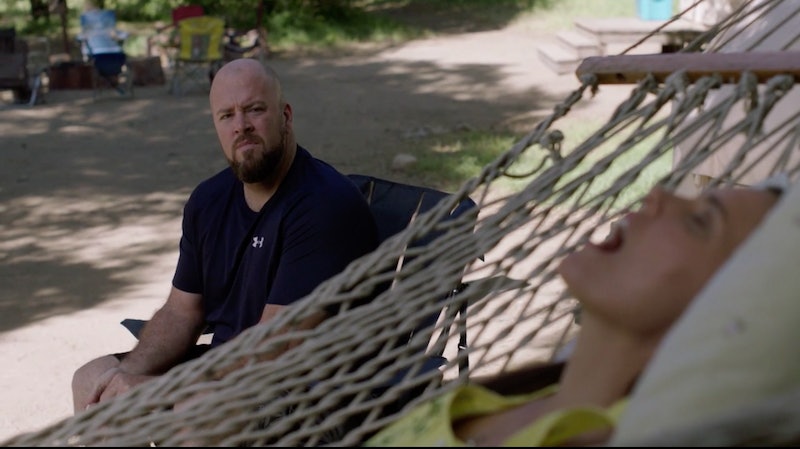 Spoilers for Camping Episode 3 ahead. On Camping, Joe (Chris Sullivan) is angry. It was previously implied that he'd been married before; however, it's not until Camping Episode 3 that we get the full story. And while his past proves to be quite heartbreaking, it doesn't change the fact that he continues to lash out at the other people on the trip.

Ever the nosy member of the group, Jandice (Juliette Lewis) decides to give Carleen (Ione Skye) a makeover when they're out tanning. While she's busy plucking her eyebrows, she asks Carleen how she and Joe met. Kathryn's sister warns Jandice that it's a sad story, but the Reiki healer claims she can handle it. Carleen explains that Joe's first wife, Ellen, had leukemia, and he brought her home so she could die comfortably. "That's where I met him," Carleen explains. "I was Ellen's hospice nurse." "Oh my god," Jandice exclaims. "This is too sad, even for me."

This doesn't stop Carleen, however, and she continues, "Ellen's health deteriorated, and she died. Joe didn't really cry at the funeral; he knew she was in a better place... After the wake, he drove me home, and we sat in his car and we talked. And then we had sex." While it's tempting to feel sorry for Joe, that doesn't change the fact that he had sex with another woman the literal day of his dead wife's funeral?? Sure, he was in an extremely vulnerable place, but that seems low — even for him. And it doesn't paint Carleen in a good light, either.

Plus, when Joe apologizes to Nina-Joy (Janicza Bravo) for calling her "Little Chocolate" — which happened in the previous episode — it comes across more as a formality than anything sincere. In fact, it doesn't seem like Joe understands boundaries whatsoever. He laughs that if they don't catch any fish, Kathryn (Jennifer Garner) will just rip off their balls and cook them instead. This is obviously an inappropriate thing to say in front of Walt (David Tennant), and George warns Joe that he's out of line. And yet he immediately does it again, saying Kathryn is "built like a bionic f*ck leapord."

However, Joe does have one redeeming moment. Soon after Walt divulges that he and Kathryn haven't been intimate in two years, George and Miguel start describing their incredible sex lives. For that reason, Carleen's husband immediately calls them out for being inconsiderate. "This man — someone you claim is one of your best friends — just told you that he hasn't gotten his dick wet in two years, and all you guys can talk about is the crazy experimental p*ssy you've been getting?" he asks, incredulously. It's disappointing that he can only make these observations when it involves sex, but it's a fair point nonetheless. He and Miguel get into a shoving match immediately afterward, though, so it's a fleeting moment of sympathy.

Besides, going through the loss of his wife and briefly defending his brother-in-law doesn't cancel out everything Joe's said or done on the trip so far. Don't forget that he made Carleen drive up to the site in Episode 1 and claimed to be exhausted upon their arrival — gaslighting he continues this episode when he throws a balled-up piece of paper into his sleeping wife's mouth, then blames it on a bird's nest when she wakes up.

Perhaps Joe will prove to be harmless, but what we've seen so far hasn't inspired any confidence. Hopefully this camping trip will change him for the better, because he's still got some serious issues to work through.

More like this
What’s New On Netflix: Ana De Armas’ 'Blonde' & A Nick Kroll Special
By Arya Roshanian
What’s New On Netflix: Meet 'The Real Bling Ring'
By Arya Roshanian
Jinkx Monsoon Is About To Get Real Sketchy
By Sam Ramsden
You Can “Fall In Love” At The Resort Where Bachelor In Paradise Season 8 Was Filmed
By Brad Witter
Get Even More From Bustle — Sign Up For The Newsletter