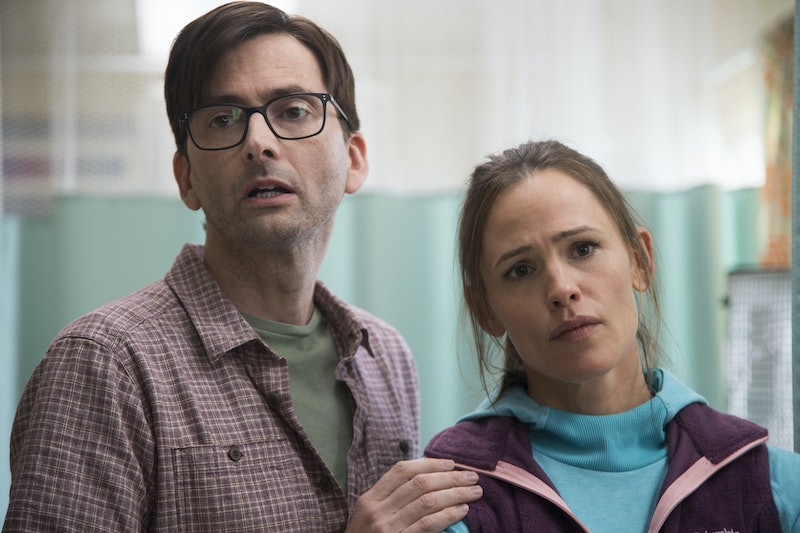 Spoilers for Camping Episode 2 ahead. It's no secret that Kathryn on Camping (Jennifer Garner) is a difficult person. She's an overprotective mom who's managed to make her husband's birthday weekend feel like detention. But in Episode 2 of Camping, it becomes clear she's far from the worst person on their disastrous trip. In fact, next to the public sex, racial slurs, and inconsiderate forgetfulness of her friends, she's may as well be a saint.

It all starts when her son, Orvis, gets hurt during a game of flag football. Not only is he not even playing, but he's also wearing a helmet for protection. Jandice (Juliette Lewis), however, manages to tackle him to the ground, and Kathryn, ever the helicopter mom, races Orvis to the nearest medical center, where he's immediately declared fine. However, on their way to the hospital, George (Brett Gelman), Joe (Chris Sullivan), Nina-Joy (Janicza Bravo), Miguel (Arturo Del Puerto), Jandice, and even Carleen (Ione Skye) decide to take a quick detour to a nearby bar.

While it's quite obvious that Orvis is O.K., it's still rude of Kathryn's friends not to check in to make sure. Aside from Carleen and Nina-Joy, who just seem to be along for the ride, this bar excursion shows just how self-absorbed Kathryn and Walt's (David Tennant) friends are. Either they aren't aware that their actions have consequences, or they simply don't care. Whatever the case, it's not a good look.

The gang never makes it to the clinic, and Walt asks George to pick up some steaks on the way back to the campsite. But his friend is so tipsy from jelly doughnut shots that he promptly forgets to do this relatively small favor. They soon get plastered, which brings out the worst side of nearly everyone. Joe, who appears to be in Narcotics Anonymous, shirks his sobriety and begins guzzling drinks like water. He then drunkenly calls Nina-Joy, the only woman of color among them, "Little Chocolate." She could easily clap back, and justly so, but she handles it calmly. She even downplays it when she recounts what happened to a livid George, telling him, "Half my friends send me black thumbs-up emojis." Seriously, why does she put up with these people?

Speaking of Jandice, the DJ/reiki healer/nut cheese merchant/figure drawing model/notary finds out that Joe is coming off of Oxy and promptly offers him some (which she conveniently carries around in her bag). She appears to know that he's in a program and still allows him to relapse. This isn't only selfish — it's irresponsible and dangerous.

So while it's easy to call Kathryn a difficult character, her friends are that much worse. After all, she would never tempt a recovering drug addict or call someone a racist nickname. She may talk your ear off about her chronic pain, yes, but she's also politically correct (probably exhaustingly so), painfully polite, and the first to play hostess. In fact, Kathryn likely plans all of their events because everyone else is too apathetic or disorganized to do it themselves.

By the end of the episode, it becomes clear that Kathryn is the glue that holds this group together. She's understandably upset that George forgot the steaks, causing them to eat tomorrow's cereal out of red solo cups instead. What's more, her intense attitude toward this camping trip is beginning to make sense. "I'm never getting that money back for the steaks," she laments dramatically. "Has anyone bothered to Venmo me yet?" Her sister responds that she doesn't have any reception, to which Kathryn responds, "Exactly. Which is why I asked everyone to do it before we came." Harsh, but true.

So, yes, Kathryn is a little over the top, but there's good reason for it — her friends and family are 10 times worse. That's not saying much on a Lena Dunham show (complex, infuriating characters are her bread and butter), but it does go to show that there's often more to someone than meets the eye. And who knows, maybe as Camping presses on, we'll start to feel a little sympathy for the rest of this unbearable gang.

More like this
David Tennant’s Transformation In ITV’s 'Litvinenko' Is Astonishing
By Sophie McEvoy
Keke Palmer Just Announced She's "Going To Be A Mom" On 'SNL'
By Brad Witter
Here Are All 703 Outfits Rachel Wore On Friends
By Kat George
The 'Kenan & Kel' Reunion On 'SNL' Took A Dramatic Turn, Thanks To Keke Palmer
By Brad Witter
Get Even More From Bustle — Sign Up For The Newsletter