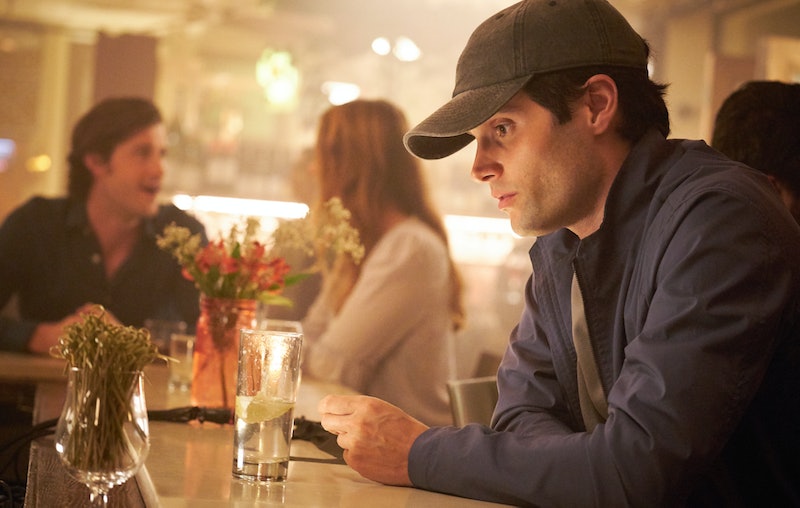 Lifetime's new drama, You, is nothing if not outrageous. Its main character, Joe, doubles as its villain, and his story gets more and more twisted as time goes on. Spoilers ahead for Episode 2 of You. He's set his targets on Beck, a grad student whose phone, personal schedule, and life as a whole he's infiltrated with ease. What started as a creepy, obsessive crush spiraled in the show's first two hours into bona fide stalking, manipulation, and extreme violence. But You has started to reveal Joe's backstory — a move that could help us understand his mind a little bit more, even though more understanding just brings more horror.

Let's be clear — nothing that You could possibly reveal about Joe will absolve him of anything he's done thus far, or may do in future episodes. Even his more "minor" infractions were indefensible, and especially the violent acts he's escalated to have confirmed that any prospect of redemption off the table. But You seems to understand that a villain who's bad for the sake of being bad is often a symptom of boring storytelling — things have much more weight when you have an idea of why Joe is the way he is.

In a flashback in Episode 2, a younger, teenage version of Joe is seen in the basement of his beloved bookstore, along with a much older man who appears to own the place. The man hits Joe out of anger that he apparently doesn't know the books well enough, and locks him into the same cage Joe's been keeping Benji in for the past episode and a half. It was just a brief glimpse at Joe's past, but it's one that the show could expand upon to better explain Joe's dangerous personality.

It's not exactly a new idea that someone who suffers from abuse early in life could go on to repeat those patterns as an adult, which is why this scene could offer some insight into Joe's psyche. But of course, this isn't even remotely the case for everyone.

The world is full of people who've endured abuse throughout their lives and became successful, well-adjusted people who would go never think of going near the realm of Joe's behavior. He's obviously got other issues, too. Not to mention, those flaws were likely exacerbated by the fact that he's a white man in America who has learned that he deserves the attention of women.

The details of Joe's backstory themselves perhaps aren't as important as the fact that You is exploring them at all. It would've been easy to dismiss Joe as a sociopathic enigma that viewers never learn too much about, and just know that they're supposed to fear, like a masked man in a horror film. But learning about Joe's past is more uncomfortable.

Of course we aren't supposed to feel badly for Joe. Of course none of his actions are anything less than damning. Of course he makes things difficult to watch. But as noted by Liz Shannon Miller of IndieWire, part of the show's goal seems to be taking a guy who other romcoms would cast as a leading man, and showing just how dangerous he could be under the surface.

"This show does not play in the realm of subtlety, but doing so would be a terrible idea, because the fact of the matter is that in many ways, Joe does seem like the kind of guy girls dream of finding," she writes. "And that’s what makes You such a bold take on tropes that some romcoms might cast in an adorable light, with romantic language about how Joe is the only one who really sees this girl for who she really is (the stuff of grand third-act declarations of love), coupled with the grim reality of what Joe is doing. Joe sometimes sounds like a good guy. But that’s how the not-great guys fool you."

You reminds its viewers of something everyone certainly knows, but no one wants to really believe. The person who, on the outside seems like a decent person — the who helps his neglected neighbor kid find food and lets him borrow books, the one who was abused himself as a child, the one who you could, in theory, empathize with — also might have a prisoner in his basement and an innocent woman in his crosshairs.