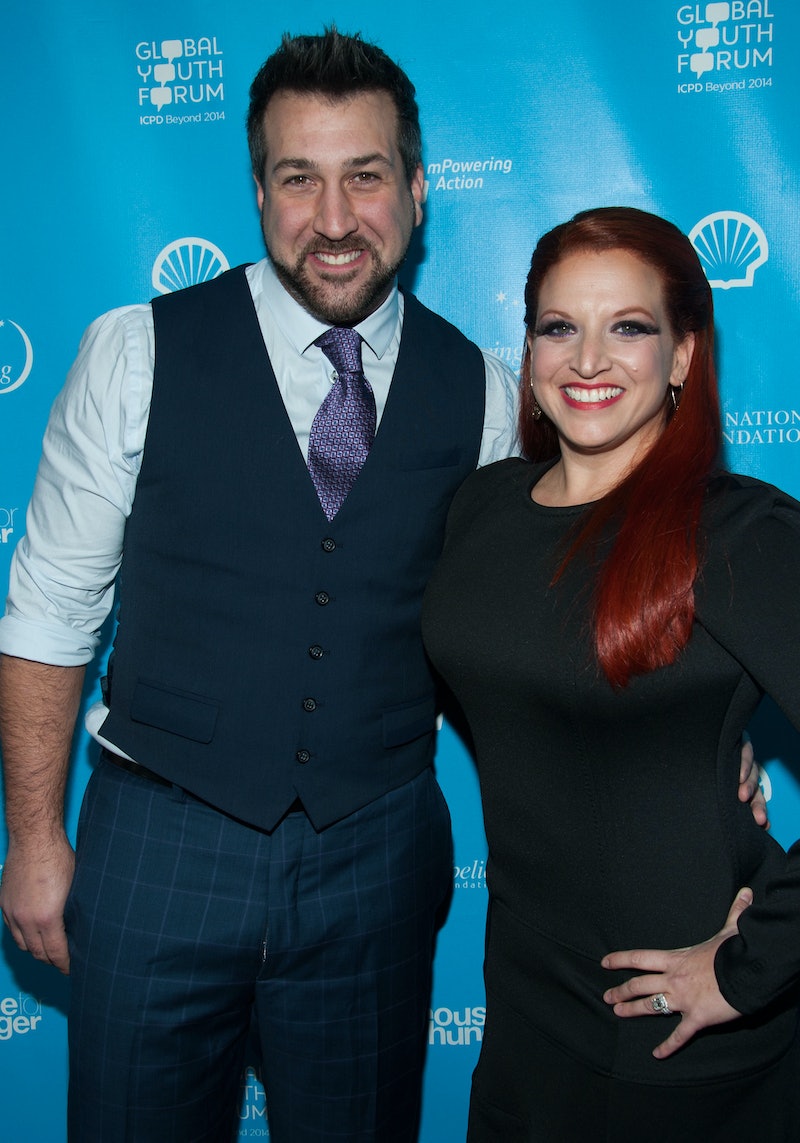 One member of *NSYNC is making a major life change. As confirmed by TMZ and E! News, Joey Fatone has filed for divorce from his wife screenwriter Kelly Baldwin. He and Baldwin were married in 2004, and they share two children together: Briahna, 18, and Kloey, 9. Bustle reached out to Fatone's representative for further comment, but had not heard back by the time of publication.

Per records obtained by E! News, the boy band member officially filed for divorce on May 13 in Florida. However, Fatone and Baldwin seem to have been estranged at least since 2014. The singer began dating his longtime girlfriend Izabel Araujo in October of 2014, and in October 2018, the couple celebrated their four-year anniversary. At the time, Araujo posted on Instagram: "4 years ago I met him at #halloweenhorrornights for our first date. We've been celebrating it every year at the same place ever since. Not your typical love story but I wouldn't change a thing!! Looking forward to celebrating many more with my partner in crime! #happy4years."

Araujo has been by Fatone's side at several major events over the past four years, including when *NSYNC received a star on the Hollywood Walk of Fame, and when most of the band reunited to perform with Ariana Grande at Coachella 2019. Although they've largely kept details about their relationship private, it's clear how committed they are to one another. She even recently attended Fatone's eldest daughter's high school graduation, and shared photos of herself with the family on Instagram. Her photos suggest that Fatone and Baldwin's official split is likely amiable, even though neither has released an official statement.

Fatone did confirm that he's currently going through a divorce when he spoke to Us Weekly at the Critic's Choice Real TV Award on June 2. "I was, at one point, married, and now I am separated, going through a divorce," he told the magazine. While they've chosen to make their separation official, The Masked Singer star and Baldwin appear to be committed to co-parenting their kids.

In June 2017, Fatone spoke to Entertainment Tonight about his daughter, Kloey, being on the autism spectrum. "It has tested us a lot," he told the outlet. "She's on the spectrum of autism and there are all different types, so everyone handles their child differently, but we handle it as we go, like most parents."

Baldwin and Fatone have always done things on their own terms. The high school sweethearts lived together and welcomed their first daughter before getting married. In 2007, the singer told People, "We did everything backward. We had a kid, we lived together, then we got married. We did everything completely reversed and it worked!" At the time, he also noted that they had been through more than one breakup over the years.

Right now, Fatone seems to be looking to his future with Araujo. In October, he made his own anniversary post on Instagram, and wrote, "These days are 4 the great times we have and won’t 4get the memories that are being made ...and here is to 4 more and many years to come!" For Fatone, Baldwin, and their family making their divorce official appears to be the start of a new chapter for everyone.