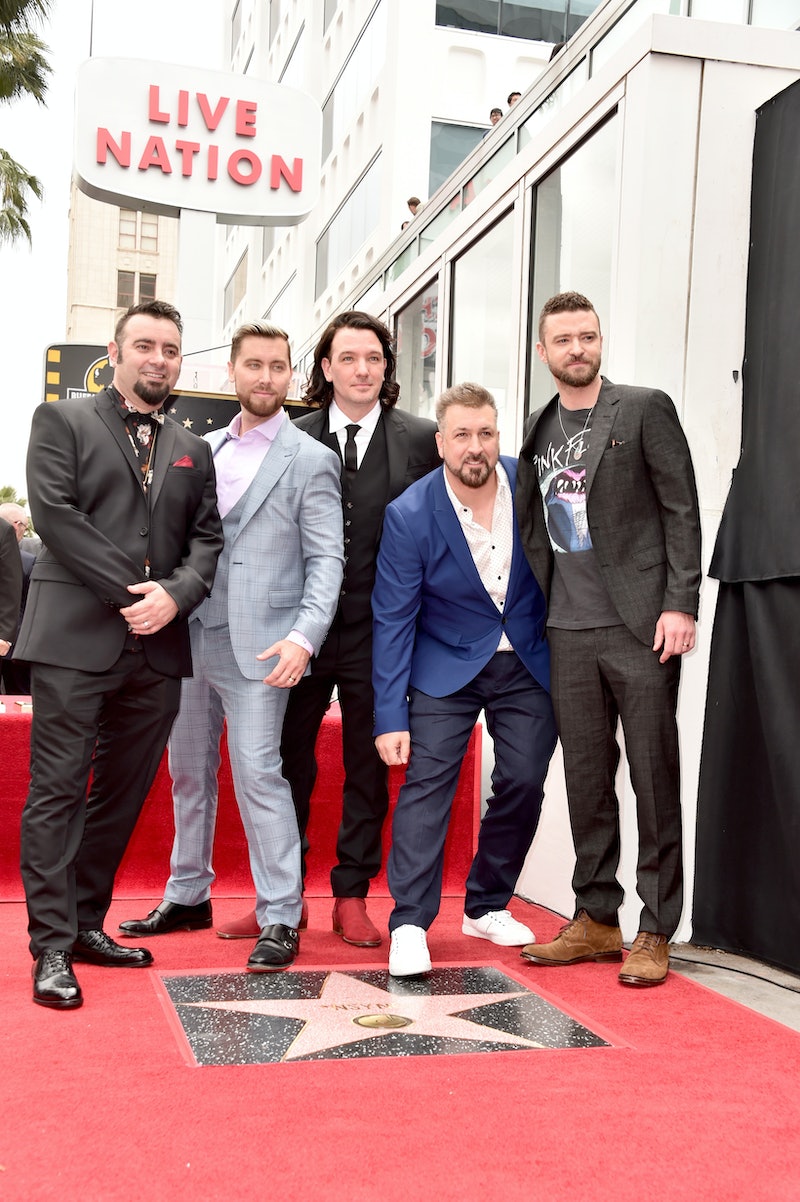 This I promise you, if you missed today's special appearance by *NSYNC in Hollywood, it should tearin' up your heart. On Monday, April 30, *NSYNC received a star on the Hollywood Walk of Fame, and the crowd went wild. Fans lined the street in front of Hollywood Boulevard, and the videos of *NSYNC fans singing at the Walk Of Fame will fill your heart with '90s nostalgia. So many fans sang the boy band's greatest hits and chanted for the group as they waited for the ceremony to begin. When the five finally arrived for the short reunion, they did not disappoint.

The five members of the singing group — Justin Timberlake, JC Chasez, Joey Fatone, Lance Bass, and Chris Kirkpatrick — together received the 2,363rd five-pointed terrazzo and brass star on the renowned Hollywood Hall of fame. But before they could accept the honor, or even be introduced by funny fans, the boy band was greeted by nostalgic fans who packed tightly onto the Los Angeles city block. "This is one of the most enthusiastic crowds we’ve ever had," Leron Gubler, President & CEO of the Hollywood Chamber of Commerce told the loyal fans in Variety's live stream of the event.

It was clear Gubler had a point — in a video Variety uploaded on Twitter many people could be seen and heard singing in unison "This I Promise You" as they waited for the event to start.

As to be expected when the five finally did appear the crowd went wild with cheering.

After Gubler's opening remarks, the group was honored with introductions from Ellen DeGeneres and Carson Daly, who didn't hold back on some fun jabs and jokes. "They rocketed to fame and stole the hearts of teenage girls everywhere, and some curious boys," DeGeneres said of the groups rise to fame. "Of course it all ended when the lost the battle of the band to the Chipettes — I’m sorry I’m thinking of Alvin and the Chipmunks 2: The Squeakquel."

Daly joked about the group's introduction to the country on MTV's TRL, which, as any '90s kid surely remembers, he hosted. "When I was first approached to honor one of the biggest group’s in TRL History, I thought to myself, ‘Oh dear god, they’re giving Limp Bizkit a star.'

Both also made a couple of jokes at Fatone's expense. At one point Degeneres jested, "Of course the band is made up of the cute one, the bad boy, the sensitive one, the sexy one, and Joey." She ended her speech with another shot at the singer, "I am happy that you’re being honored here today, look at the people here who honor you and support you, you inspire all of these people. Congratulations to all of you, and Joey."

Daly also got in a goodr joke at Fatone's expense. He said:

"I was one the very lucky people who got to hang with these guys when the whole world wanted to hang with them. And, keep in mind, this was time when Justin’s perm was the envy of poodles and sheep everywhere, Lance was known for dating actresses not actors, JC has discovered the fountain of youth, apparently, Chris was rocking cornrows and braids, and of course I spent most of my time with Joey, because he was 25 years older than the rest of the guys."

Though Fatone could be seen laughing in the background, the crowd wanted to show their support for the beleaguered pop star — he might be a good sport when it comes to taking a joke, but his fans apparently didn't want to see him made fun of. The audience erupted in a chant of "Joey! Joey!"

Perhaps the highlight for many fans was when Chasez decided to take advantage of the timing of the ceremony to pay homage to one of the most famous JT memes out there, "It's gonna be May!" (If you're unfamiliar when Timberlake sings "It's gonna be me" in the song of the same name the "me" sounds like "may").

Fans were particularly quick to react to that moment. Both in person with arms in the air and cheers, and online with more mixed reactions.

Though the ceremony is over, fans of the band in the Los Angeles-area can keep celebrating the band by heading over to the "Dirty Pop-Up" shop through May 1. Otherwise we'll always have the tunes in our hearts and online, available for streaming. Who know, maybe this reunion will be enough to spark their interest in a tour — fan's can always hope, right?