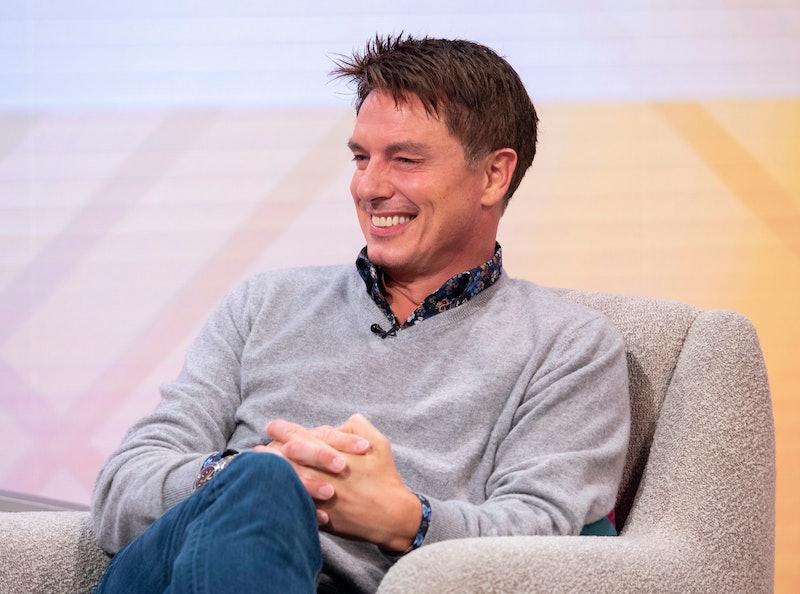 After bringing joy to the jungle on I'm A Celeb and becoming a regular host on This Morning, John Barrowman has become a pretty familiar face on telly over the past year. Well, it looks like that's going to continue into 2020, as John Barrowman is joining Dancing On Ice, but there's a catch. You see, there's currently an empty space on the judging panel due to Jason Gardiner's recent exit, and it seems that Barrowman is the totally right guy for the job.

In a press statement sent to Bustle UK, ITV teased what Barrowman will bring "his very own expert critique" to the panel, and will use his experience as a "veteran of stage and screen" to judge the celebrity contestants. "I am so excited to be returning to the Dancing on Ice family," Barrowman said. "Unlike most I have been through the rigorous task of skating live as a contestant in the first series. This is a thrilling adventure for me and I hope to bring a Fresh, Fun and Fab-u-lous angle to the judging panel."

Barrowman will be joining Diversity's Ashely Banjo alongside Torvill and Dean as the head judges of the series.

As Digital Spy notes, Barrowman was partnered with former Junior World Champion Olga Sharutenko during the first series, where they came 4th. "I was really enjoying the skating and enjoying the creative process of working with Chris [Dean] and Jayne [Torvill] at the beginning of the week and getting that routine going," he said at the time of his last week on the show in 2006 via his official site. "But you know, all good things have to come to an end at some point and what a better way of going out!"

ITV have been more than happy to welcome Barrowman onto the team, describing him as the "perfect addition" to the panel. "John's quick wit, inimitable talent and all round fabulous personality make him the perfect addition to Dancing on Ice's all star panel," Katie Rawcliffe, ITV's Head of Entertainment Commissioning said in a statement. "[W]e're looking forward to seeing him bring his own brand of sparkle to the show."

The news of Barrowman's involvement on the show comes after Gardiner took to Instagram to address the rumours that he'd been "axed" from the series, to state that he'd left on his own accord. "After all these years I feel it's time for me to say goodbye to my judging role and return to things I have been putting on hold and have been on the back burner for a while," he said in a video (via RadioTimes).

"To all of my DOI fans I really thank you for your support and encouragement over the years, I know we've gone through some controversies and I'm glad you got my unique judging style and honesty."

While there's no official date as of yet, ITV has confirmed via the statement that Dancing on Ice will return in the new year with a bunch of fresh-faced celebrities to make their mark on the ice and impress the judges.