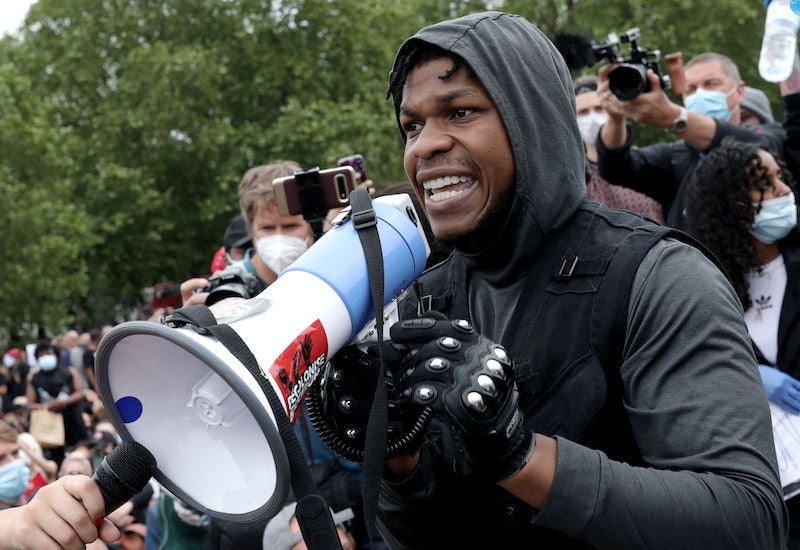 After fans and Hollywood figures rallied behind him and his impassioned Black Lives Matter speech at a protest earlier this week, John Boyega thanked his supporters on Instagram and urged them to continue to propel the movement forward. As protests surrounding the death of George Floyd, the Black man who died while pinned under a white police officer in Minneapolis, continue to be organized across the globe, Boyega attended a protest in London on June 3 and delivered a now viral speech. "I'm speaking to you from my heart," he told the crowd. "I don't know if I'm going to have a career after this, but f*ck that."

After he received widespread support, Boyega expressed gratitude on Instagram on June 7 with photos from pre-COVID-19 visits to schools in London's Southwark burrough — and urged supporters to enact long term change. "I want to thank you all for the love and support you have shared over the last few days, although nothing I have done is for praise, or is truly even enough, in the grand scheme of things," Boyega wrote. "This is an intense time for our community, and the most important thing is for us to maintain momentum and not lose sight of how critical it is to pursue long term solutions and commitments, for the sake of our generation, and the next."

He continued, “Conversations about black businesses, ownership and support are happening, and I will continue to have these conversations with the full intention of birthing ideas that are sustainable and tangible.” Calling on his peers to connect with future generations, he added, “We need everyone, across industries, socio-economic backgrounds, countries, to unite with a shared goal of REAL change.”

Boyega attended the protest after he became embroiled in Twitter arguments when he tweeted that he “really f*cking” hates racists on May 27. He shut down tweets that perpetuated the “reverse racism” myth and criticisms about his word choice as a Disney star. He similarly addressed claims that his comments would impact his career and said on Instagram Live, “All those things were just a part of my dreams, part of working… that’s got nothing to do with how you treat people.”

As for any career worries, Jordan Peele, J.J. Abrams, Charlie Brooker, and more Hollywood figures have since rallied behind him. Peele tweeted on June 3, “We got you, John.” Abrams, who directed Boyega in Star Wars, added, “You KNOW that as long as I’m allowed to keep working, I’ll always be begging to work with you. Deep respect and love, my friend.” Brooker, the creator of Netflix’s Black Mirror, also tweeted, “I would crawl through a barrel of broken glass to have John Boyega even so much as *glance* at one of my scripts.”

Whatever Boyega tackles next, it's clear that his supporters have got his back.

More like this
Miss Thailand's Soda Tab Gown At The Miss Universe Pageant Had A Special Meaning
By Brad Witter
Why We Love Investigating Friendship Breakups
By Carolyn Steber
5 Wild Theories About Miley Cyrus’ “Flowers” Music Video
By Jake Viswanath
The Ticketmaster Senate Hearing & Taylor Swift Tickets Debacle, Explained
By Jake Viswanath
Get Even More From Bustle — Sign Up For The Newsletter
From hair trends to relationship advice, our daily newsletter has everything you need to sound like a person who’s on TikTok, even if you aren’t.