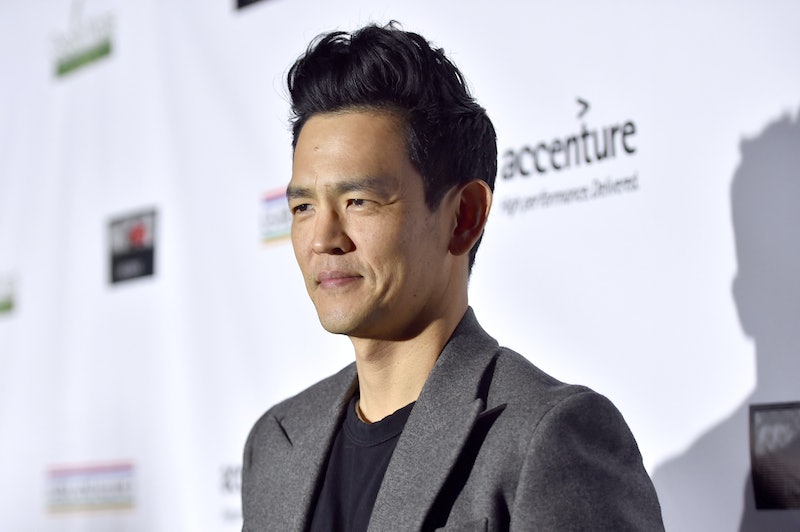 If you were online last summer during the peak of a particular social media movement, you may have seen John Cho fantasy-cast as James Bond, Ethan Hunt, Steve Rogers, and even "Magic" Mike Lane. The #StarringJohnCho campaign made (and continues to make) a statement about representation by imagining a universe where Asian-American actors get the iconic roles almost always played by white men. But Cho's actual latest role isn't an internationally-renowned spy or an all-American superhero, as in the whisper-soft indie drama Columbus, the actor plays Jin, the son of a dying man. In talking about representation, conversations tend to revolves around blockbusters, but smaller-scale films like Cho's Columbus help move the needle forward, too.

"This movie in particular, I will say, was unusual because it didn’t explicitly push against any stereotype," Cho says, speaking over the phone in late July. "It was true freedom because it was confident to do its own thing. It didn’t repudiate any stereotypes, it just existed outside of that pool, and that to me is where we want to go."

"If the stereotype is that Asian men are weak and not masculine, I don’t want to do an action movie as a response."

The movie, which made its debut at this year's Sundance Film Festival, is the first feature by acclaimed video essayist, Kogonada. It has as many languid and loving shots of modern architecture as those Star Trek movies Cho appears in have space tech-babble, and a contemplative vibe that isn't desperate for your attention — particularly when it comes to its characters. While some movies seem to be a direct answer to assumptions about who's allowed to do what on screen, Columbus "doesn't bother to address stereotypes," says Cho. "It just is."

In Cho's experience, responding directly to the racist images that exist in mainstream storytelling doesn't necessarily bring about the best result. By refusing to engage with those prejudices, he refuses to give them power. "If the stereotype is that Asian men are weak and not masculine, I don’t want to do an action movie as a response," he explains. "I want to do stories that ignore the stereotyping all together, and this is that movie for me."

While the goal of #StarringJohnCho was to awaken some minds, the poster-actor for the hashtag has been conscious of the industry's issues for as long as he can remember. According to a July 2017 study by the Media, Diversity, & Social Change Initiative at USC Annenberg, only 5.7 percent of speaking characters in the most 900 popular films released in the last 10 years were played by Asian actors. 44 percent of those films films don't include a single Asian character at all.

"Unfortunately I’ve always been very aware of how what I do relates to the perception of Asian-Americans. Even when I was young, I just didn’t take stereotypical roles. I tried not to, even when it was financially irresponsible to do so. Because it didn’t seem worth it to add onto that, because I was an Asian boy who grew up in America and felt those plights," Cho says, pointing to Harold & Kumar and American Pie as examples of early projects he starred in that didn't contribute to those racial biases.

"And the reason I said 'unfortunately' is because it does kind of mess with your head thinking about that all the time," he continues. "It does distract you sometimes from your own happiness or your own artistic pursuits. And it is a burden that I carry happily and yet, it is a burden... for all actors of color that they have to think about that aspect of their lives."

This burden led Cho to Columbus' Jin, the offspring of a respected architecture professor who's taken ill. The character arrives in the titular Indiana town and finds himself in a sort of emotional purgatory between his father's recovery or death. While Jin holds this frustrated vigil, he forms a brief but deep friendship with a local student (Haley Lu Richardson) over her appreciation of the town's famed, clean-lined buildings and their shared sense of filial duty. (Casey's mother has a drug problem, which is keeping her daughter back from moving forward.) In playing the role, Cho says that he identified with the reverence and responsibility that Jin feels.

"Being a son, it’s natural to feel that your father can take an outsized sense of importance in your life as kind of a title influence over you and the way you think," the actor says. "In a way, I took that to be very specific with Korean-Americans, but it’s also very general ... It was a quiet kinship between myself and Kogonada, where I just felt like I could lock in with my own family history."

Cho told The Post Magazine in 2016 that his father asked him to pursue a career in newscasting instead of acting, specifically so he could "tell the story of Korean-Americans." In Columbus, Jin's father is an absent presence; since Jin can't talk to him, he has to connect with his father by finding the poetry in the structures that he loves. Parents and children may not have a hope of ever fully understanding one another, but they try nonetheless.

"I feel like the second half of my life has been really thinking about how my parents, how we are the second half of their lives," Cho says. "And my father didn’t grow up with a father, because he died when he was very young. I think about that, the broken continuity, a lot. That he didn’t learn from his father how to be a father, and then we came to a new country with different rules for fatherhood. So the movie may have significance in that way, because it does for me.”

The film is thoughtful too about relationships between men and women, not just the complicated legacy of parents. As Jin waits out his father's health crisis, he and Richardson's Casey fall into intimacy quickly. But the film ignores the potential romantic storyline that's just within reach.

"I found that it was refreshing to have a boy/girl relationship that wasn’t sexual — to play something different, especially with someone so young," Cho says now. (He's 45 to Richardson's 22.) "It was interesting to relate to her on an intellectual level and an emotional level. Usually women who are pretty are cast... they are meant to be love interests, so it was certainly unusual. But everything about the movie is unusual."

Cho's fans and supporters of increased representation may want to see him reach superstar status, but for the actor, the "unusual" still calls. So while it would be incredible and overdue progress to see the traditional demographics of archetypical movie heroes be broken by Cho, in choosing projects like Columbus, it seems he's instead working toward another milestone: operating, as much as he can, as a free artist outside of those confines.