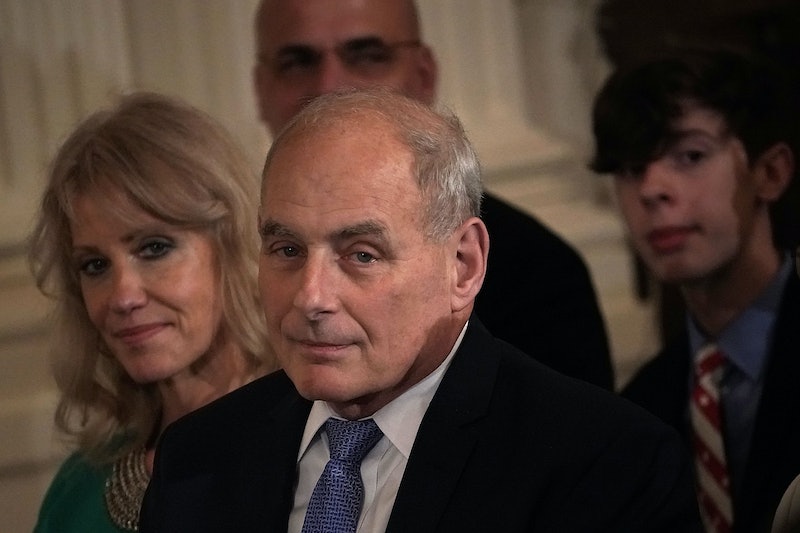 Less than a year after supporting a policy to separate child migrants from their parents, President Trump's former chief of staff John Kelly joined the board of a migrant shelter's parent company, The Washington Post reports. The company, Caliburn International, owns a subsidiary that makes money housing unaccompanied child migrants as a contractor for the U.S. government — more than $220 million in the last 12 months, according to CBS News.

The move drew the criticism of many, including 2020 Democratic presidential candidate Sen. Elizabeth Warren of Massachusetts. Warren called it "corruption at its absolute worst" and said that Kelly "could be making big bucks serving on the Board of a company that's profiting from the same cruel plans he put in place." Bustle reached out to Kelly for comment through Caliburn International.

Warren replied to her initial tweet with a letter addressed to Kelly asking that he resign to "save what’s left of his reputation." She also said that her plan to fight corruption would stop senior government officials from getting paid by firms that they gave government contracts to. As the White House chief of staff, however, Kelly would not have awarded any contracts to Caliburn subsidiaries himself, CBS News reported.

James Van Dusen, Caliburn's CEO, praised Kelly in a news release provided to The Post. "With four decades of military and humanitarian leadership, in-depth understanding of international affairs and knowledge of current economic drivers around the world, General Kelly is a strong strategic addition to our team," Van Dusen said.

"Our board remains acutely focused on advising on the safety and welfare of unaccompanied minors who have been entrusted to our care and custody by the Department of Health and Human Services to address a very urgent need in caring for and helping to find appropriate sponsors for these unaccompanied minors," he continued.

The child migrant shelters that the company's subsidiary, Comprehensive Health Services, runs are among the largest in the country — and the only ones run by a for-profit company, The Post reports.

Kelly was seen touring the largest of them all in Homestead, Florida, in April. He was caught on camera by a local television station getting a tour.

In April, the Homestead, Florida, facility began expanding to the point that it now can host 3,200 children on land next to an Air Reserve Base. The kids sleep in dorm rooms for 12, and older boys sleep in large halls with hundreds living among the rows and rows of beds.

That facility is among the most criticized, too. The facility is not inspected by child welfare experts because the facility does not have the proper Florida licenses, CBS News reports. Bustle reached out to both Caliburn and its subsidiary Comprehensive Health Services for comment.

The situation is so worrisome that lawmakers in DC have written bipartisan letters asking for the Department of Health and Human Services to look into the facility. "We are deeply concerned that children in these large shelters and unlicensed facilities, such as the one in Homestead, Florida, are not adequately shielded from sexual violence," both Sens. Dianne Feinstein, a California Democrat, and Charles Grassley, an Iowa Republican, wrote last year following allegations of abuse.

Still, the government contract money continues. CBS News reports that Caliburn's subsidiary could make slightly more than $340 million for operating just the Homestead facility between now and November this year. They also run several in Texas.