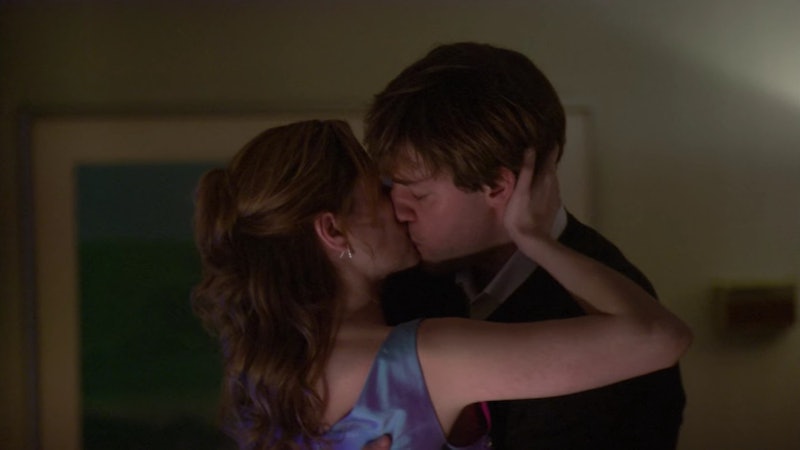 It's the episode listeners have been waiting for since Jenna Fischer and Angela Kinsey's Office Ladies podcast debuted in October 2019. John Krasinski finally discussed Jim and Pam's first kiss with Fischer and Kinsey during their May 13 episode about "Casino Night." And the actors revealed several behind-the-scenes details about the kiss that Office fans still can't stop talking about.

When it came to their big kiss, a major turning point for Jim and Pam, Krasinski admitted he was "really nervous." Not only was their kiss filmed before Jim and Pam's vulnerable chat in the parking lot, but the actors weren't even allowed to see each other for an hour before filming so the kiss would feel just as intense as intended.

"We never rehearsed it on stage together," Fischer revealed. "And I remember they brought me to set. All the lights were dim, there was no one around, it was super eerie." But, the kiss turned out to be far from "eerie." In fact, it remains a fan favorite moment all these years later.

As important as the kiss was, when Jim tells Pam he loves her in the parking lot was an even bigger moment for Fischer and Krasinski. Looking back, the two said they took this scene very seriously. So much so, the scene really hit home for Krasinski because he knew exactly what Jim was feeling. Believe it or not, in high school, the actor said he was always the "best friend," not the guy who gets the girl.

"That moment in particular was insane for so many reasons. I remember that the cells of my body were really buzzing," Krasinski said. He once again admitted this scene made him "extremely nervous" and explained, "I think I had interpreted it as the biggest scene I had done on the show. Something to that level of intensity was like super terrifying to me." Fischer echoed her former co-star's sentiments by adding, "People always ask about the kiss, but this was the scene we worked hardest on."

Technically, Jim and Pam first kissed during "The Dundies" (Season 2, Episode 1), but many don't think that kiss counts because Pam drunkenly and briefly kissed Jim. Their kiss in "Casino Night" was mutual, more passionate, and came after an intense, emotional moment in which Jim declared his love for Pam. However you look at it, Jim and Pam's milestone in the Season 2 finale will forever be one of the best TV kisses.

More like this
At 28, Debra Jo Rupp Was Living A Much Different '70s Show
By Grace Wehniainen
'The Queen’s Gambit' Season 2 Tweet Wasn’t From Anya Taylor-Joy
By Mary Kate McGrath, Jack Irvin and Grace Wehniainen
This 'One Tree Hill' Wardrobe Error Is Going Viral On TikTok
By Brad Witter
Ashton Kutcher Wants Danny Masterson “To Be Found Innocent” In Rape Retrial
By Jake Viswanath
Get Even More From Bustle — Sign Up For The Newsletter
From hair trends to relationship advice, our daily newsletter has everything you need to sound like a person who’s on TikTok, even if you aren’t.