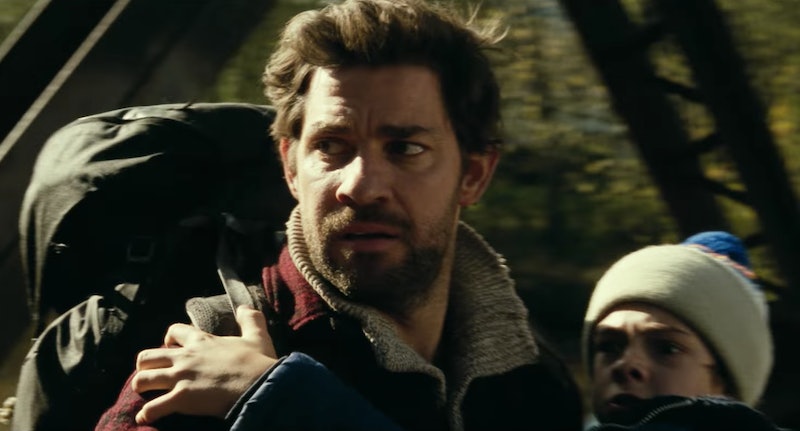 After the surprise world-wide success of A Quiet Place, Paramount is planning on making a follow-up, and John Krasinski's idea for the A Quiet Place sequel sounds so exciting. In a recent interview with Deadline, the actor and director told the outlet that the second movie should return to the world of the first, but in a different capacity. That means we'll be getting more of the blind alien monsters who hunt their human prey through sound, but the characters surviving in this awful alternative universe could be entirely different. Spoilers ahead for A Quiet Place.

Krasinski, who starred in the first film opposite his real-life wife Emily Blunt, directed the box-office horror smash using a script by screenwriters Bryan Woods and Scott Beck. Though he did not write the story, he does know what direction he thinks the high-concept thriller should go in next. He explained to Deadline:

"The thing that I loved in the movie, where my mind kept wandering as we were making it, was the question of who was on the other end of those fires, when the father lights the fire and in the distance those other fires light up. How did those people survive? How did that old man survive?”

Krasinski has a good point. In the original movie the only people (save the aforementioned screaming man), viewers see are members of the same family. Everyone in that family was already particularly adept to handle the circumstances of the world because the family's daughter was hearing impaired so the rest of clan was already fluent in American Sign Language. They also seemed to already be farmers, capable of growing and storing their own food without the conveniences of modern society.

But how do the other survivors, seen through their use of fire, handle a silent life? Are their whole communities who have created methods of quiet communication? At the end of A Quiet Place the family discovers a way to repel the aliens — have other's caught on to this method? Are there other ways of stopping the deadly monsters? The possibilities are endless.

It should be noted that Krasinski has not been confirmed at the sequel's director, and with his character dead and all, he might not be involved in the movie. Krasinski was even surprised that audiences wanted a sequel. He explained that a follow-up wasn't something he has considered while filming the movie. "To be perfectly honest, it was never really on my mind while we were making it,” he told Deadline. “I never really thought of it as an expanded world; I always thought of it as a one-off.” He explained further:

"It’s only a short while since the movie came out,” he said, “but already people are saying, ‘We want to live in this world more,’ which is really interesting. I’m surprised people aren’t like, ‘Nah, we know what this is, and we just want to leave it as it is.'"

Though Krasinski has ideas for the second movie, so do the original screenwriters. Woods and Beck told The Hollywood Reporter that "they have plenty of material left over" after writing the first one. Whether this means involving the remaining family members from the first movie, zooming in on other characters living around the same time, or something else entirely remains to be seen.

Still, It would seem though that Krasinski's instinct to expand the universe beyond these characters could be a strong one. The J.J. Abrams-produced science fiction/horror movie Cloverfield went a similar route with its sequels 10 Cloverfield Lane and this year's The Cloverfield Paradox. Though the movies are tonally very different and focus on completely different characters in vastly different circumstances, they share the same universe.

Who knows, maybe audiences will be shaking in their seats gasping at every noise louder than a whisper for years to come.