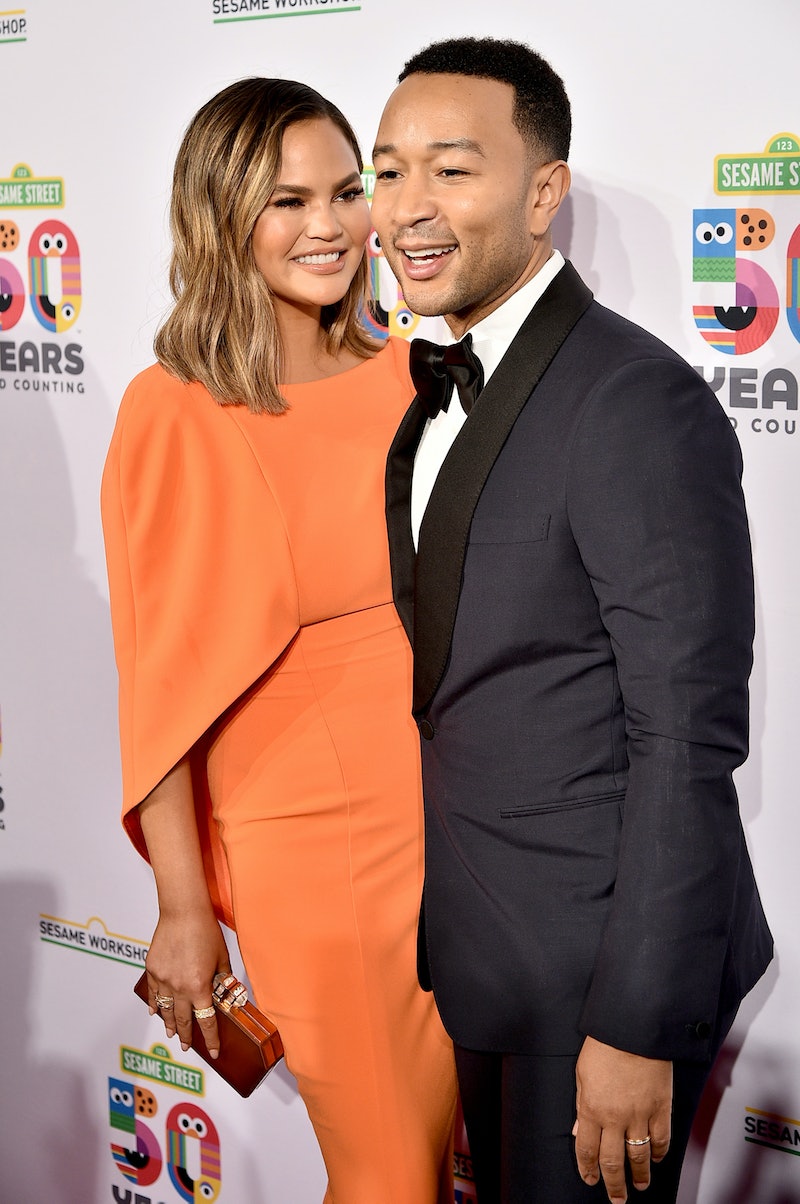 As far as celebrity couples go, Chrissy Teigen and John Legend are definitely one of the most open. They've shared so much of their lives (and their kids') with their fans on social media, and now, they're sharing the story of how they met and fell in love — even if they couldn't call it "love" right away. In an interview with Access on Monday, Legend admitted it wasn't love at first sight with Teigen, but obviously, in the end, it all worked out anyway.

The conversation was inspired by Sunday night's episode of Family Feud, where Teigen and Legend's family played against the cast of Vanderpump Rules. On the show, host Steve Harvey asked the couple about their love story, and Teigen went into detail in a way Legend wasn't expecting while telling him what happened after they filmed his video for "Stereo" in 2006, which is where they met. "We did the video, and then we had sex," Teigen said, and Legend cut her off there.

But on Access, he had a second chance to tell the story, and he admitted that it did start with a bit of "instant chemistry." "It was at least lust at first sight for both of us and then, you know, obviously it developed in that day and that moment,” Legend said. "We had instant chemistry that day and then we started dating not long after that and here we are, married with two kids."

Legend went on to say that although their connection was strong at first, the beginning of their relationship consisted of a ton of traveling together, since they didn't live in the same place. He said:

“I don’t know what counts as our first date because we hung out that day and night, and then hung out. That’s as the kids say. And then we started going on trips together not long after that because we didn’t really live in the same city. I was living mainly in New York, she was mainly living in L.A. and so we would just meet. She would come meet me out on the road. We would go on little trips together. We went to, like, Mexico. We went to Italy. I’d say that the time we fell in love was our first trip to Italy and so we ended up getting married there, and we go back there almost every year. … Italy is, like, our love spot.”

Teigen and Legend still travel a lot now that they're married and living in the same home. In fact, earlier this month, their whole family was in Paris together, so it seems like those traditions from the beginning of their relationship have definitely carried over.

Legend and Teigen may not have had love at first sight, but the love between them grew as they spent more time together, and that's what really counts. In the 13 years since that first date, they've come so far — and they've given the rest of us an adorable relationship to gush over on Instagram.

More like this
Only 3 'Married At First Sight UK' Couples Are Still Together
By Bustle UK
Dixie D’Amelio & Noah Beck “Love Each Other” Despite Breakup Rumors
By Julia Emmanuele, Jordyn Tilchen and Grace Wehniainen
Tyler Perry Makes Rare Comment About Meghan Markle & Prince Harry's Love Life
By Radhika Menon
An Extremely Messy Ranking Of What Actually Happens In 'Don't Worry Darling'
By Chloe Foussianes
Get Even More From Bustle — Sign Up For The Newsletter