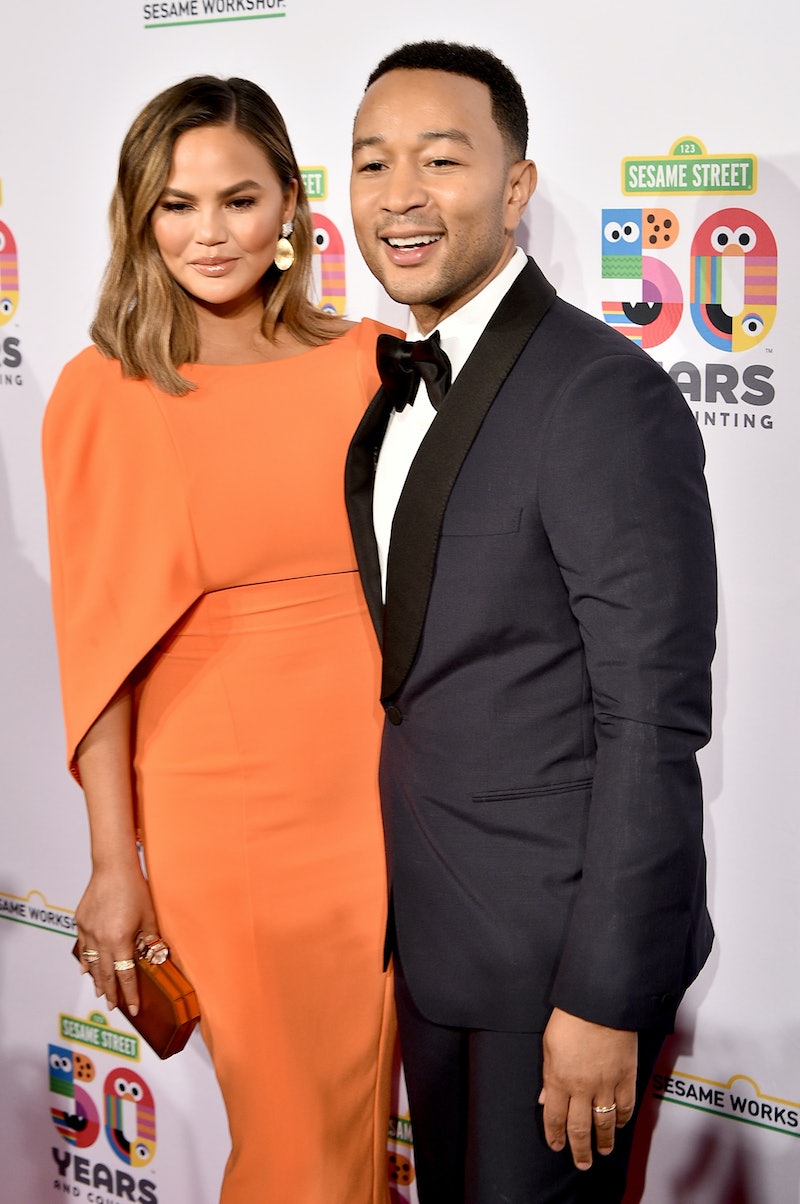 It's hard out there for an Instagram husband. Day after day, shot after shot, they work tirelessly to get the perfect pic of their partners — and most of them aren't even professional photographers by trade. Well, John Legend defended his Instagram husband status with a series of posts recently, after his wife, Chrissy Teigen, jokingly dissed his skills. Err, his skills or lack thereof, rather. No offense though, John — just the interpreter over here.

OK, so, it's unclear when, exactly, Legend's skills began to let Teigen down, but she decided to make her feelings clear with a tongue-in-cheek Instagram post on Sunday, Aug. 25. The photo she posted was really cute, and was a shot of her and Luna that the cookbook author seemingly took herself.

"I never have pictures of myself because I am selfless and am the designated photo taker and keeper for my family," she explained in the caption, "and no one else seems to care to be thoughtful and take good photos of me they merely click them off without paying attention to angles or lighting or general photo ambience. but it’s okay," she conceded. "such is the life I chose."

She then clarified that the entirety of her caption was dedicated "(To john)," and Legend most definitely didn't take her humorous dis sitting down. In fact, he fired back with not one, but two photos of proof that he's a dedicated Instagram husband.

Shortly after Teigen posted her diatribe about Legend's skills, the singer shared a lovely photo of his wife looking happy and cheerful and casually dressed in a cute, black, beach-y cover-up. "When your wife says you're a bad Instagram husband but you're like," Legend wrote in the caption.

Teigen just wouldn't let sleeping dogs lie, though, and responded by saying, "I took this." Whether or not that was actually true remains to be seen, but Legend quickly replied, "take that back!" As of yet, Teigen has not, in fact, taken her comment back.

Legend then went on to post his second photo of Teigen, seemingly in an attempt to further prove his point and secure his Instagram husband status. The pic he chose was of her and Luna, with Luna holding a pink ladle-like spoon up to her mom's mouth. Despite the silly nature of the shot, Legend snapped it at an angle that definitely suited Teigen's features, and again, she looked lovely.

"Photo by....me!" he made sure to point out in the caption. He then added, "#goodinstagramhusband" for good measure. OK, John, we see you out there, doing the thing.

At the time of publication, Teigen hadn't added her opinion about Legend's follow-up pic in his comments, so ... perhaps she legit thinks he did a good job there? Or, maybe she's just been too busy being the "keeper" for her family. The world may never know.

Obviously, Teigen and Legend's Instagram "feud" is all in good jest. Even if Teigen doesn't think his skills are quite up to par, though, at least he's got a solid day job to keep them all afloat in the meantime (*wink wink*).

More like this
Chrissy Teigen Is Pregnant After Resuming IVF Following Her 2020 Pregnancy Loss
By Grace Wehniainen
Nicola Walker’s IRL Husband Is No Stranger To TV Screens
By Darshita Goyal
Leona Lewis & Husband Dennis Jauch Welcomed Their First Child
By Darshita Goyal
Who Is Camila Cabello Dating? She's Getting Cozy With Lox Club CEO Austin Kevitch
By Radhika Menon
Get Even More From Bustle — Sign Up For The Newsletter