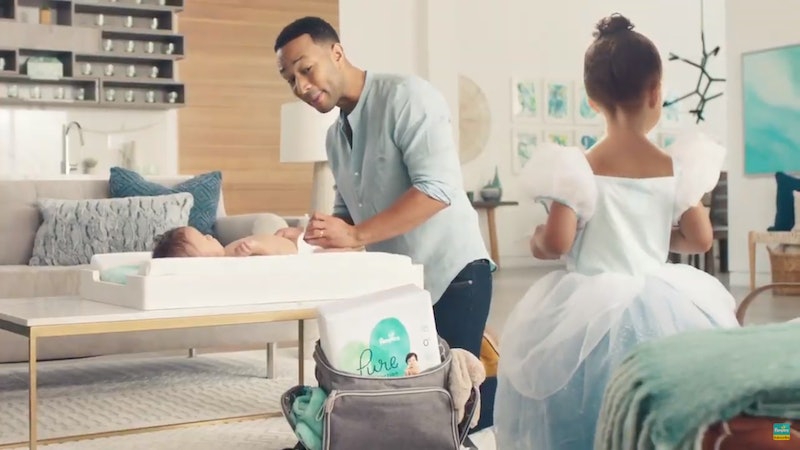 Only John Legend could turn a jingle he made up for his newborn baby into a fun-loving commercial to be viewed and adored by thousands. A teaser to John Legend and Chrissy Teigen's Super Bowl commercial, "Stinky Booty 2.0," just dropped — it's cute, it's charming, and it gets real about dads on diaper duty.

In June 2018, Legend and Pampers released the original jingle "Stinky Booty" in a commercial with the couple's now 2-year-old daughter, Luna, which thanks dads for "making stinky booty duty special." In the new ad, Luna's little brother Miles gets a turn. "Somebody's got a stinky booty," Legend begins to sing, before opening the diaper and grimacing at what's inside. "I'm gonna need some back up on this one," he says, and the camera pans to, not Teigen, but a princess dress-wearing Luna, who attempts to toss him one measly baby wipe. Her efforts are endearing, but not effective.

"Guys?" Legend says, as he turns to a chorus of dads with babies strapped to their chests. Then, a full on remixed, choral arrangement of "Stinky Booty" breaks out among the men. And honestly, it slaps. One of those dads is Super Bowl halftime performer Adam Levine, who sings, "and daddy's gonna clean it up," to a freshly changed little one, presumably his youngest daughter Gio Grace Levine, although the singer hasn't confirmed if Gio's in the commercial just yet.

Enter Teigen, who opens the front door to a room full of singing dads. "Must we do this every time?" she asks. Legend offers nothing but an innocent shrug.

Teigen shared the video on her Instagram. "Becoming a parent changes you," she wrote. "And you thought I was extra..."

In a recent interview, Legend told People that he and Teigen have been singing the "Stinky Booty Song" since Luna was born. "She still loves the song even though she's potty-trained," he said. "We're using it on Miles now."

It's easy to smile and laugh along with such an endearing ad, but its underlying message is serious — that dads should embrace all aspects of fatherhood, including diaper changing. Pampers is using the jingle to celebrate "hands-on dads."

Legend himself is a hands-on dad, without question. He told People that he has never thought twice about changing a diaper for one of his kids when it was needed. "It's just whoever is able to do it at that time,” he said. "It has never been a thing where it's like, 'You have to do it or I have to do it.' It's like, 'Okay, I have him right now and his diaper needs changing, I smell it, I’m going to change him.' I've always been like that, and never felt any hesitancy to do it."

"I had never changed a diaper before Luna, but I learned quickly," he continued. "It's not hard — just do it. I think us having dogs has made it easier to deal with the whole poop of it all. Once you get used to poop, you're not too squeamish about anything."

Will there be a "Stinky Booty 3.0?" That's up to Teigen and Legend — at the moment, they seem to have their hands pretty full.