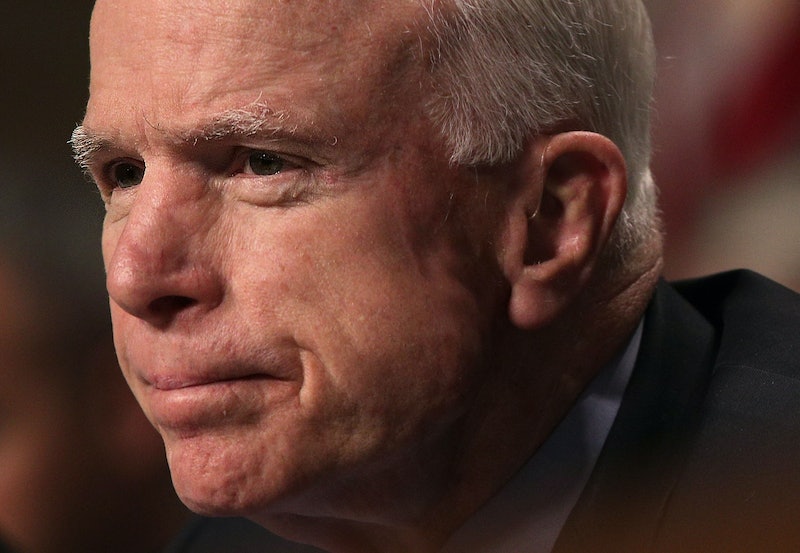 John McCain returned to the Senate floor on Tuesday to cast a vote that would allow procedural debate on the GOP health care bill to take place. He denied that he would vote in favor of the bill itself — "I will not vote for this bill as it is today," he reportedly said — but later that evening he did just that. McCain voted for the health care bill he viciously denounced.

McCain has been a vocal critic of the secretive process in which Senate Republicans drafted their polarizing health care plan, known as the Better Care Reconciliation Act. In an impassioned speech on the Senate floor on Tuesday, McCain condemned the short-comings of the current version of the bill.

It’s a shell of a bill right now. We all know that. I have changes urged by my state’s governor that will have to be included to earn my support for final passage of any bill ... We’ve tried to do this by coming up with a proposal behind closed doors in consultation with the administration, then springing it on skeptical members, trying to convince them it’s better than nothing, asking us to swallow our doubts and force it past a unified opposition. I don’t think that is going to work in the end. And it probably shouldn’t.

Six hours later, he voted to pass it.

Technically, according to the New York Times, the procedural vote was on whether the BCRA complies with budget rules. But symbolically, the vote was largely seen among Senators as a gauge of who did and did not support the bill's passage.

While the bill ultimately failed in a 57-43 vote, meaning that the BCRA has no chance of passing the Senate unless significant changes are adopted, McCain's vote has raised questions about why the Senator would seemingly break his own word and support a plan that he has repeatedly spoken out against.

McCain has been in the public spotlight this week given his decision to return to Washington, D.C. after having surgery in Arizona and being diagnosed with aggressive brain cancer last week. While some commended the Senator's commitment to fulfilling his Senatorial duties, others decried the hypocrisy of McCain's decision to interrupt his taxpayer-funded health services specifically to vote for a bill that could leave millions without health insurance.

When asked by a reporter why he favored the motion to move the bill forward, McCain responded, "I just thought it would be good to move the process forward, and then we'll see what happens later on." Given this flip-flop, it will certainly be interesting to keep an eye on the rest of his decisions as Senate debate on the GOP-led effort to repeal-and-replace Obamacare continues.