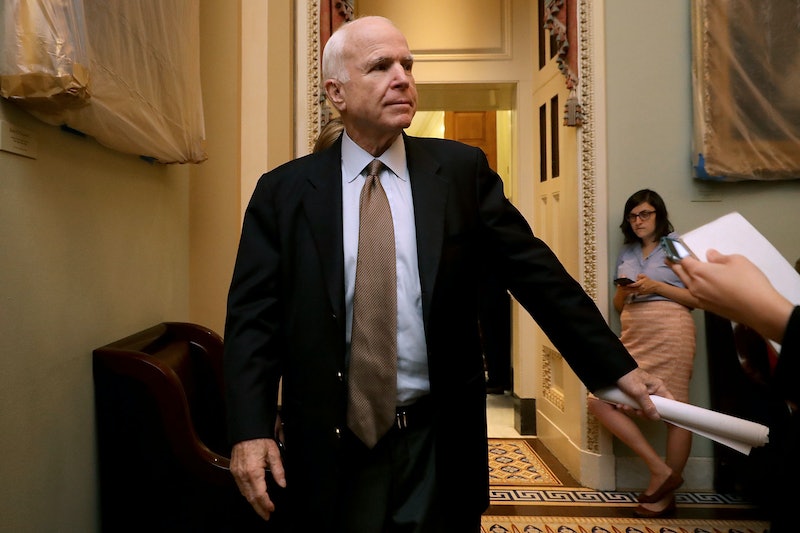 Republican Sen. John McCain returned to Capitol Hill on Tuesday, bearing a mark above his left eye as a reminder of his medical condition. Less than two weeks ago, McCain had surgery to remove a malignant brain tumor. Still recovering, McCain voted to move forward on health care reform, as Republicans fought to overcome the opposition that has slowed their progress in recent weeks.

McCain's return was welcome news for Republican lawmakers, who hoped his vote would help them move forward with dismantling the Obama administration's Affordable Care Act. After news of McCain's surgery went public, Senate Majority Leader Mitch McConnell announced that the Senate would delay its health care vote until the Arizona senator returned. In McCain's absence, Senate Republicans tried unsuccessfully to pass their bill, losing at least two votes from the GOP side.

When McCain returned on Tuesday, health care was the obvious hot topic. The Senate voted 51-50 in a procedural vote to begin debate on the Republican-proposed health care legislation. Vice President Mike Pence broke the 50-50 tie. For his part, McCain voted with Republicans to move things forward, but he sent a message to his colleagues that he wasn't happy with the situation they found themselves in. He criticized Republicans' use of closed-door meetings to put together a health care reform bill and instead called for senators to do things the old-fashioned way, with committees and bipartisanship.

"If this process ends in failure, which seems likely, then let's return to order," McCain said in an address that was streamed live on C-Span's website. He also urged the Senate to remain independent of the executive branch:

Whether or not we are of the same party, we are not the president’s subordinates. We are his equals.

With McCain's "yes" vote on Tuesday, debate on health care reform can officially begin in the Senate. However, McCain also said in his address to his colleagues that he wouldn't vote "yes" again that easily. "I will not vote for the bill as it is today," he said. "It is a shell of a bill."

McCain did not explain why he voted to move things forward, even though he wasn't happy with the bill. Perhaps he hopes that the ensuing debate will help achieve the bipartisan reform he called for. Either way, he closed his speech by indicating that he would eventually return to Arizona to treat his brain cancer. "I have every intention of returning here," he said, optimistic about his condition and his position in the Senate.