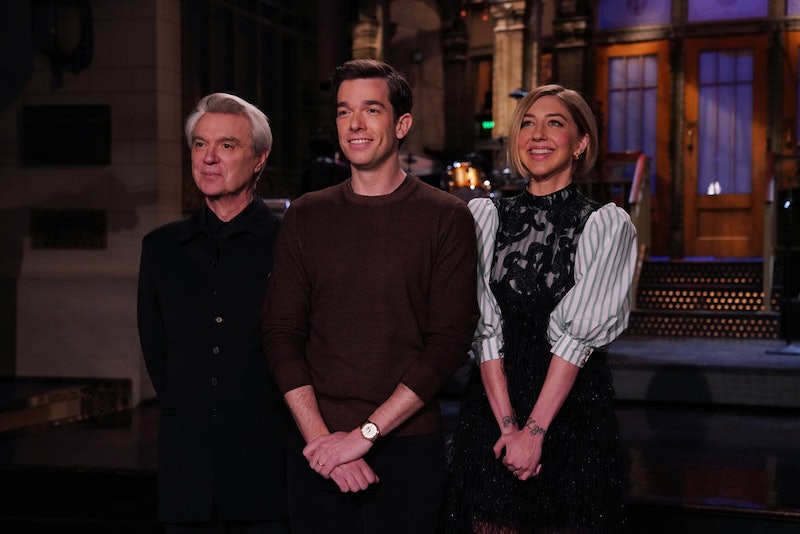 Because his return to the Saturday Night Live stage happened to fall on a leap day, John Mulaney decided to use his 2020 monologue to give an educational history lesson about the holiday. And since he was already talking about history, he seized the chance to air his grievances about the U.S. constitution, too.

After explaining that we have Julius Caesar to thank for leap years, Mulaney pivoted to explaining his disdain for the Founding Fathers. His main issue with this "weird group of guys" is which amendments they chose to put into the Constitution — and in which order they wrote them. While Mulaney is all for the First Amendment of freedom of speech, freedom of assembly, and freedom of religion, he's not a fan of the second two. He thinks the Second Amendment may as well say, "You can have all the guns ya want!" while he believes the Third Amendment, which restricts the quartering of soldiers in people's homes (or as he calls it, "The army can't live in your house!"), was only added because one of the Founding Fathers' wives had an affair with a soldier.

All this talk about the Founding Fathers naturally led Mulaney to Hamilton creator Lin-Manuel Miranda. He joked that a woman had requested to spend a day with him as her Make-A-Wish Foundation wish, but that she confessed Miranda had actually been her first choice.

Mulaney then helped make the woman's wish of meeting Miranda come true. But don't feel too sorry for him: Miranda wasn't the one who got to host SNL.