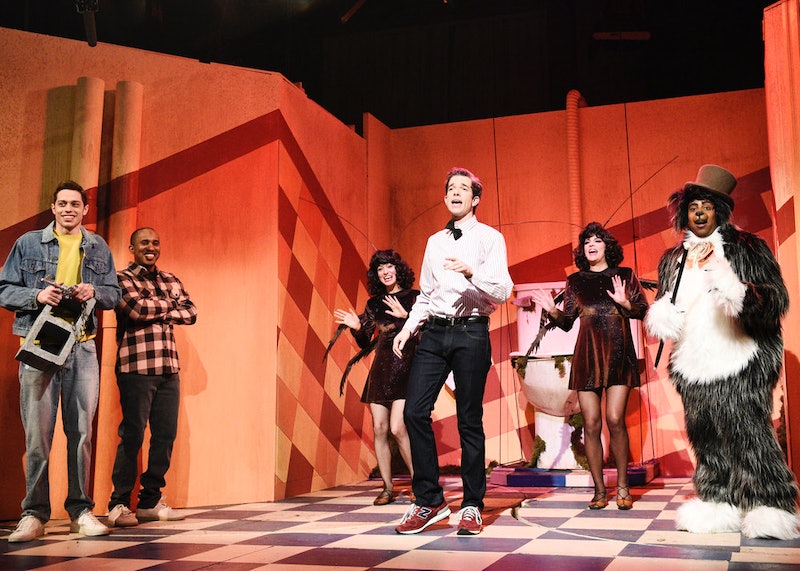 No writer has been able to consistently spin theatre-kid sensibilities into comedy quite like John Mulaney. Now, he's added another piece to his catalog of pieces that blur the line between sketch comedy and theatre with his "Bodega Man" sketch on SNL. One of the standout moments of Mulaney's first SNL hosting gig in April of 2018 was undeniably the "Diner Lobster" sketch, in which the question of "why wouldn't someone order lobster at a diner?" is answered with an increasingly complex narrative comparing a diner lobster's struggle to the plot of the Broadway musical Les Miserables.

For his latest show, he gave the world a spiritual sequel to that sketch by asking a similar confounding inquiry — what kind of person uses the bathroom at a Bodega? In lieu of songs from Les Mis, however, the sketch parodied elements of Willy Wonka And The Chocolate Factory, Little Shop Of Horrors, Cats, and Rent to provide an extensive list of reasons not to use the restroom at any bodega.

The sketch begins much in the same way as the "Diner Lobster" sketch did, with Pete Davidson playing a man who makes a surprising request of John Mulaney's character — in this case being given a key to the bathroom which is tied around a cinder block — and Chris Redd as Davidson's friend who encourages him to reconsider before Kenan Thompson begins singing while dressed in an animal outfit, swapping out his lobster outfit for bodega cat in a top hat.

From there, the song parodies start getting doled out liberally as "Pure Imagination" from Willy Wonka becomes "Zero Sanitation" and "The Candy Man" becomes "The Bodega Man." Soon the bodega becomes filled with singing cats, sentient prayer candles, and Oompa Loompas that are really just Sour Patch Kids that turned into living beings before the whole sketch ends in a Rent-style line-up to celebrate this "Bodega Of Love."

Mulaney's return to the theatrical is well-timed, given that the most recent project of his was a deeply specific parody of a musical theater classic. A few days before his SNL episode premiered, the television series Documentary Now! aired an episode entitled "Original Cast Album: Co-Op" that was written by and stars John Mulaney as a Stephen Sondheim-esque figure who penned a musical that shares some striking similarities to the Sondheim musical Company. Between his lovingly crafted Sondheim parody, his Broadway run of Oh Hello!, and at two SNL sketches that are dedicated to the art of theater, it's hard to argue that there is any comedian who is doing more to keep the art of theater alive than John Mulaney.

It's safe to assume that these musical-sketch crossovers will become a mainstay should Mulaney return to host in the future, but until then fans will be left to guess what future sketches could grace the SNL set. Could there be a parody of Sunday In The Park With George about ordering a fancy martini at a dive bar in SNL's future? A Phantom Of The Opera-based satire about seeing a movie at 11:15 a.m. on a weekday? While there's no guessing what theatrical pastiche Mulaney could bring to SNL next, it is clear that his passion for the performing arts isn't slowing down any time soon.

More like this
‘SNL’ Finally Spoofed Nicole Kidman’s Weirdly Beloved AMC Ad & Nailed It
By Stephanie Topacio Long
Dan Levy Appears In The Latest Teaser For The Weeknd's HBO Series, 'The Idol'
By Jake Viswanath
Did 'Grey’s Anatomy' Just Drop A Major Taylor Swift Easter Egg?
By Grace Wehniainen
Everything To Know About Taylor Swift’s 10th Studio Album, 'Midnights'
By Grace Wehniainen and Jake Viswanath
Get Even More From Bustle — Sign Up For The Newsletter