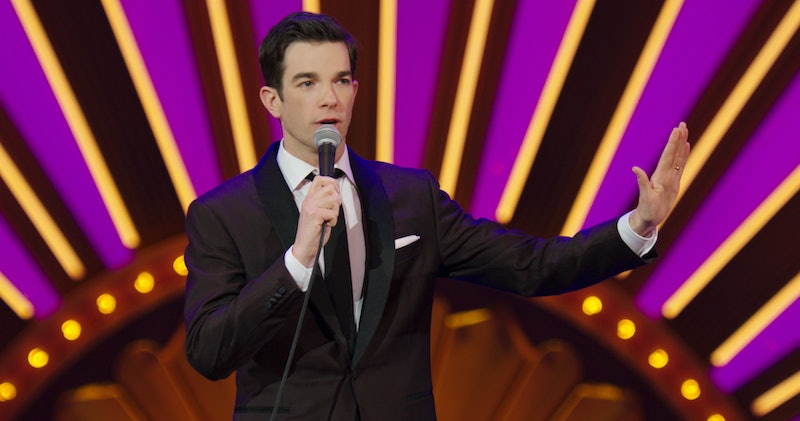 John Mulaney has solidified his spot as a comedy icon time and time again. From his years writing on Saturday Night Live — he's the one who concocted the character of Stefan with Bill Hader — to his endlessly referenced stand-up acts, he never fails to deliver a laugh. John Mulaney's Netflix special Kid Gorgeous, which dropped on May 1, is no different. And, though the entire thing is saturated with quotable lines and stories, there's one standout joke you can't miss from Kid Gorgeous.

About two-thirds of the way through the performance, filmed at Radio City Music Hall in New York City during his most recent tour, Mulaney delves into politics. If you're at all familiar with the work he's done over the years, you know he's not exactly a "political comedian." He acknowledges that, saying he's never really cared much about politics, but that's changed since "last November, the strangest thing happened!" Without mentioning President Trump by name, Mulaney offers his hilarious take on the current chaos of America's political situation:

"This guy being the president, it's like there's a horse loose in a hospital. I think eventually everything's going to be OK, but I have no idea what's going to happen next. And neither do any of you, and neither do your parents, because there's a horse loose in the hospital. That's never happened before! No one knows what the horse is going to do next, least of all the horse. He's never been in the hospital before, he's just as confused as you are."

This bit goes on for several minutes, getting more and more outrageous as it does. Mulaney says some people have tried to offer expert solutions because they've seen birds inside the airport — but that's not good enough. We've all seen birds inside the airport! This is a horse loose in a hospital. The days when you don't hear anything from the horse are the worst, he says. Doctors are trying to go about their surgeries while side-eyeing each other and asking if anyone knows what the horse is up to. It's quiet — too quiet. The comparisons keep coming, each more gut-busting than the last.

Here's a version of the bit that Mulaney did on The Late Show With Stephen Colbert last year:

Political comedy in this day and age isn't inherently ill-advised, but it can be exhausting if not executed properly. That's not always the fault of the person behind the jokes, either — it's the sheer fact that audiences are bombarded with this kind of material from all angles almost constantly in 2018, and it's enough to make anyone weary. Plus, when certain political happenings are affecting people's lives in very real, very difficult ways, or causing strife between yourself and the people around you, why on earth would you want to continue thinking about them when trying to escape into comedy?

But Mulaney's take works. It's partly because his execution of the jokes is so goofy, and because the very basic visual of a horse loose in a hospital is outrageous enough on its own to elicit a response. But it's also because it taps into a feeling of disbelief that plenty of people have when witnessing the daily political developments of this administration. It fosters a kind of solidarity, seemingly saying, "you guys are seeing this, too, right?"

But beyond that, these jokes don't trap you into a negative head space. Your heart doesn't get any heavier listening to Mulaney riff. You aren't groaning in genuine disappointment when certain policies or real-life quotes are brought up. You aren't laughing through some measure of hesitation over whether or not some specifics are really OK to be laughed about.

Mulaney doesn't pretend that this bizarre presidency isn't happening, but he also doesn't ask you to think too deeply about it in that moment, either. He's not trying to be overtly edgy or deliver any scorching takes. He's just trying to make you laugh at the absurdity of it all. Sure, those serious, real world issues are still going to be there when the end credits roll, but for a little bit, the audience can just bask in its collective exasperation with the help of a silly metaphor.

The rest of Kid Gorgeous offers what longtime fans have come to expect from Mulaney — ridiculous stories about his dad, his Catholic upbringing, and of course, his French bulldog Petunia. All of these elements would already lend to another characteristically great Mulaney special, but the unexpected political bit shows just how skillful he is at bringing people together to laugh over a universal experience, even when it's one many of them would typically like to forget.