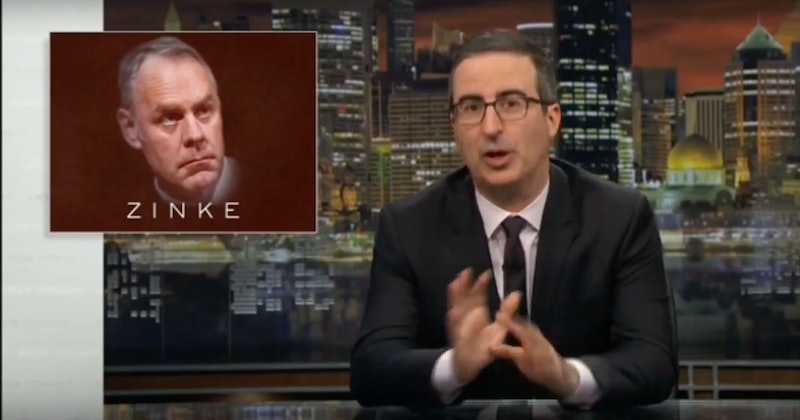 Sunday's episode of Last Week Tonight focused on one of the more obscure members of President Trump's cabinet: Secretary of Interior Ryan Zinke. Comedian John Oliver brought up Zinke's awkward or straight-up outrageous remarks. And yeah, they are kind of cringe-worthy — enough for Oliver to call Zinke a "deeply strange man."

Trump's cabinet is already known for making comments that made people scratch their heads — remember when Secretary of Education Besty DeVos suggested guns in a Wyoming school could protect students from grizzly bears? Or when the head of the Environmental Protection Agency Scott Pruitt suggested climate change isn't necessarily bad because "humans have most flourished" during global warming?

You can add Zinke falsely claiming to be a geologist to that list of strange comments. For context: Zinke, who oversees the management and conservation of federal land and natural resources, majored in geology while on a football scholarship at the University of Oregon. Last week, Zinke defended his decision to shrink Bears Ears National Monument's protected land by bringing up his expert credentials, reported CNN.

"I'm a geologist," Zinke reportedly said. "I can assure you that oil and gas in Bears Ears was not part of my decision matrix. A geologist will tell you there is little, if any, oil and gas."

It's not the first time Zinke has strutted out his geology cred. Except one problem: Zinke has never worked as a geologist.

“He has never been a geologist. What he did do was major in geology in college, which does not include geologist,” Oliver said on his segment. “All is does is qualify you to watch the movie San Andreas and whisper to your friends, 'It wouldn't happen like that.'”

CNN reported that Zinke had written in his autobiography: “I studied geology as a result of closing my eyes and randomly pointing to a major from the academic catalog, and I never looked back. I am just glad I did not find electronics.” After graduating with a Bachelor of Science, the future Trump appointee chose to join the military rather than pursue a career in geological surveying.

Despite never holding a job as a geologist, the Montana Republican appears to be mighty proud of his qualifications — he's mentioned it at least 40 times in public settings, including under oath before Congress, per CNN's count. But as Oliver noted, the interior secretary also brags about other "past glories."

Last Week Tonight aired a clip of Zinke when he was running for Congress in which he said this: "I was a high school president and we went undefeated our senior year in football, won the state championship. America."

With a look of disbelief, Oliver asked, "What was that? It would have made just as much sense if he'd said, 'I weighed six-and-a-half pounds when I was born and I once ate a quesadilla burger at Applebee's. Bolivia.'"

Zinke's penchant for self-aggrandizing doesn't stop there, Oliver continued. "For example, (Zinke) served as a Navy Seal, which is genuinely impressive, but here is how his service was described in an ad for his book."

Roll clip: "Zinke rose through the ranks to be a commander at the same SEAL team that killed bin Laden, saved Captain Phillips, and rescued the lone survivor," it says.

That all sounds pretty heroic, except Zinke retired from that SEAL team 10 years before it saved Captain Phillips and 12 years before it killed Osama bin Laden, Oliver pointed out.

Oliver then described Zinke as an "extremely weird man" for having his own special flag fly outside the Department of Interior headquarters whenever he's in the office. And yeah, that's kind of weird indeed.