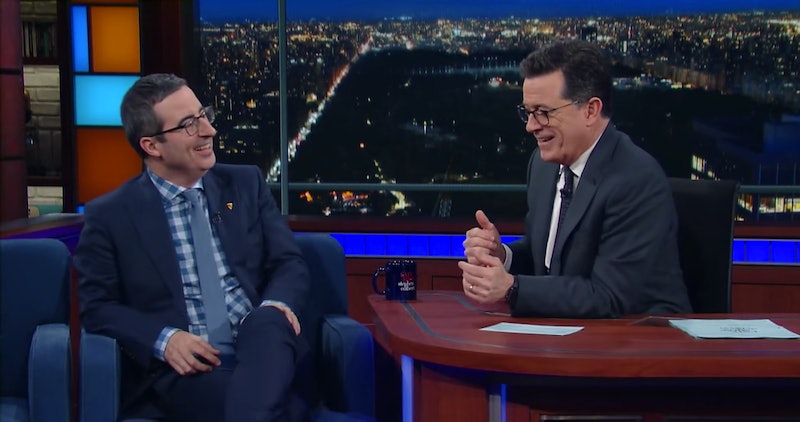 On Tuesday night, the much missed John Oliver appeared on Stephen Colbert's The Late Show to chat about his "scrappy" English hometown, returning to HBO's Last Week Tonight, and inevitably, Donald Trump's presidency. Oliver hasn't been on the air hosting his own show since Nov. 13, 2016. In other words, America hasn't been able to enjoy his snarky, yet smart commentary on the U.S. political scene since a few days after Trump was elected to office. And as if I need to remind you, a lot has happened since then.

As it turns out, Oliver isn't immensely looking forward to covering it. And why would he? Between Trump's travel ban, the global gag order, Kellyanne Conway's Bowling Green Massacre, and Betsy DeVos' confirmation as secretary of education — just to name a few — there's a lot of dense, sometimes dark material to pick apart. Oliver told Colbert how he's felt since Jan. 20 and you'll probably be able to relate to his description. As usual, it's spot on.

Until Inauguration Day, nothing was really happening. It was just being tied to a train track, watching the train coming. And then of course, Inauguration Day is the train hitting you, and you say, "Yup, that felt pretty much how I thought it was going to feel."

And Oliver isn't expecting things to let up anytime soon, which means he'll be on top of the week's news like he was prior to that fateful 2016 Election Day. Breaking the news to Colbert, he admitted that covering the administration won't be all sunshine and roses. And considering his last episode ended with the conclusion "F*ck 2016" and a big explosion, his hesitancy to take on 2017's antics is really saying something.

It's exhausting. It feels like Inauguration Day was 114 years ago. We have a long way to go, it's going to be hard. It's easy to be angry on adrenaline, but it's much, much harder when you are just tired, and this is going to be exhausting.

The days of "Make Donald Drumpf Again" might be over (or maybe not?), but Oliver will return to HBO on Sunday, Feb. 12 for his 90th episode. And earlier on Tuesday, the same day he appeared on The Late Show, Rolling Stone published an interview with him titled "John Oliver Takes on The Trump Era." Despite the difficulty of covering Trump's administration, when the possibility of early retirement came up in that interview, Oliver said, "I don't do well relaxing. I don't really know how to relax, so that does not suit me well." And you can take comfort in that fact, because it means he's not going anywhere, no matter how crazy 2017 gets.