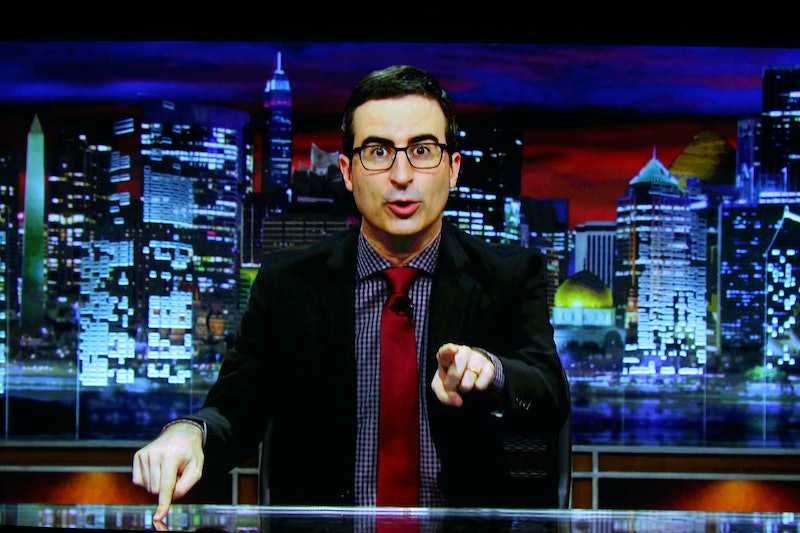 On Sunday's episode of Last Week Tonight, John Oliver opened his show by taking apart the biggest news of the week: former FBI director James Comey's testimony to the Senate Intelligence Committee. Oliver tackled the Comey hearing by pointedly explaining why Comey's testimony certainly did not do Trump any favors, particularly in regards to the president's credibility.

Oliver began the episode by noting that his segment on the Comey hearings—in which fired FBI Director James Comey testified about his interactions with the Trump administration—would constitute a continuation of his show's theme known as "Stupid Watergate." "Stupid Watergate" is a term Oliver has used over the past few months to describe the investigation into the Trump campaign's alleged Russia ties, noting that it has "all the potential ramifications of Watergate but where everyone involved is stupid and bad at everything."

Oliver immediately stated that he believed that the hearing was very damaging to Trump's credibility and cited several examples from Comey to illustrate his point. First, Oliver noted that it was very telling that Comey explicitly said that Trump lied about his reason for firing Comey. Trump had initially said that he fired the former FBI director because he did not believe that Comey was providing the Bureau with strong leadership, something which Comey said were "lies, plain and simple." Comey also noted under oath that he believed he was fired because of the way he was handling the investigation into the Trump campaign's alleged ties with Russia, something which, ironically, Trump also admitted in an interview with Lester Holt. Oliver highlighted this inconsistency in Trump's rationales to demonstrate why the hearing proved detrimental to Trump's credibility and honesty.

Oliver then noted that the hearing further called Trump's credibility into question when Comey described why he was compelled to take meticulous notes following his meetings with Trump, something which he had never done after meetings with Presidents Obama and Bush. Comey told the Senate Intelligence Committee that he kept written records of his meetings because he was "concerned that he [Trump] might lie about the nature of our meeting so I found it important to document." Oliver appeared flabbergasted at Comey's statement, saying that Comey was "describing his meeting with the president like a person who thought he was about to be murdered."

Oliver also expressed his shock that even Fox News seemed to find the hearing damaging to Trump's credibility. Oliver noted that the network "was struggling to spin any positives" that emanated from the hearing. To illustrate his point, he then played several clips of Fox analysts noting how disconcerting they found the information that Comey revealed, with one pundit explicitly saying, "Politically, I thought it was very damaging to the president. I am concerned after hearing Jim Comey today. It was far stronger, more credible, and more damning than the statement we got from Jim Comey yesterday."

Oliver concluded his segment by directly taking Trump to task for his response to the Comey hearings. Trump reacted to the hearings on Twitter the day after they took place, writing in a tweet that,"Despite so many false statements and lies, total and complete vindication..." According to Oliver, this amounts to "Trump essentiality claiming he has been vindicated by testimony he's claiming is false...at this point he's become a walking logical paradox."

Overall, Oliver's segment shed substantial light on the fact that Comey's hearing seemingly did nothing to boost Trump's credibility, and, in fact, likely further damaged it. It will be interesting to watch Oliver's continued coverage of "stupid Watergate" as the investigation into the Trump campaign's alleged Russia ties continues to unfold.